Indeed, Azza shall be deserted And Ashkelon desolate; Ashdod's people shall be expelled in broad daylight, And Ekron shall be uprooted. 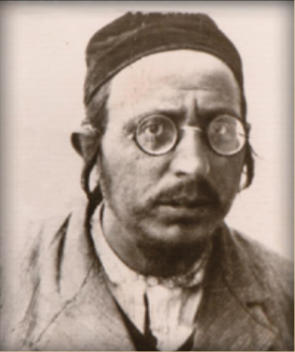 As the Gog and Magog implications of the Russian invasion of Ukraine become clear, more previously hidden clues are coming to light. The blogger writing under the pseudonym, Yankev, reported on several such clues.

One such clue was discovered in the book, “Tzfiras Chen” (sirens of grace) written by the mystic Rabbi Noach Gad Weintraub (1888-1954) who cited a long line of distinguished rabbis who taught that God would save the Jews from Russia which would eventually become the head of the Gog and Magog alliance that comes against Jerusalem in the end-of-days.

In another esoteric book, Rabbi Weintraub states that Ukraine derives its name from “Ekron”, one of the five cities of the Philistines and that the people themselves descend from Philistines who migrated there.

Yankev added that the name “Ekron” contains the root letters of “Ukraine” as well as “Corona” (and also the recent virus variant — “Omicron”.

If so, then the invasion of Ukraine was predicted by the Prophet Zephaniah:

Indeed, Azza shall be deserted And Ashkelon desolate; Ashdod‘s people shall be expelled in broad daylight, And Ekron shall be uprooted. Zephaniah 2:4

Yankev also wrote a teaching in the name of Rabbi Yekusiel Yehudah Halberstam, the founder of  the Sanz-Klausenburg Hasidic dynasty:

Most rabbis identify ‘the sons of Ishmael’ as the Arabs and Muslims. In their invasion of Ukraine, the Russian military has pressed the Chechen Muslims, notorious for their brutality, into service as shock troops.

Yet another clue was attributed to Rabbi Salman Mutzafi, a 20th-century Jerusalem mystic born in Baghdad:

“My father my teacher said that it seems from all the holy books that the kingdom of Gog is the state of Russia of our days, as it is situated in the north of the world, and rules over different nationalities and ethnicities and ancient tribes including the Amalekites, the Canaanites, Gypsies and others from the 70 nations, and they are the ones who will come with their extensive military forces to Israel…and in the land of Israel they will fall and be destroyed…”