He led me back to the entrance of the Temple, and I found that water was issuing from below the platform of the Temple—eastward, since the Temple faced east—but the water was running out at the south of the mizbayach 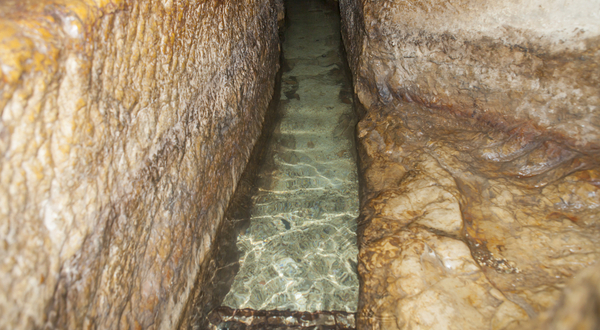 Recently, excavations were undertaken in the basement level of the Frumin building on King George Street in the heart of Jerusalem. Workers were surprised to find a large volume of water flowing into the excavation. They initially assumed the water was the result of a broken water pipe but soon discovered that the source was a previously unknown natural source.

The three-story building was originally intended to be a six-story office building but construction was halted in the 1947 War of Independence. It and was chosen to house the Knessets of Israel and after completion, housed the first to fifth Knessets from 1955 until 1966. The construction was intended to create a Knesset museum.

It is described as a “massive amount of water” that requires the installation of a pumping system to prevent the foundations of the building from being undermined, and the building itself from being flooded.

There is still no decision on how to deal with the hidden spring. And if after the completion of the works it will be possible to leave the water source open to the public or the water will be drained into the municipal water system.

“When looking at the prophecies, it is important to first accept them as they are presented, by a simple and literal reading, what Jews call the pshat,” Rabbi Berger said. “This can sometimes be the most difficult approach as the literal reading can seem quite fantastic. But the Bible tells only the truth. What is described as having happened, actually happened precisely as written. And what the prophets say will happen will certainly appear precisely as written.”

“In this case, people who are familiar with Jerusalem would have assumed that such a scenario was impossible. The only natural water source in Jerusalem that was known to date was the Gihon Spring that flows into Shiloah.”

Rabbi Berger then went on to explain what could be learned from this unexpected natural phenomenon.

“Another word for ‘spring’ in Hebrew is makor (source),” the rabbi noted. “The government used to sit in that building. That was their ‘source’ but we now see what direction they have taken, incorporating the enemy into the government. Most people do not know but the first bet din (rabbinical court) composed of holy rabbis used to sit in the building as well. The Knesset began to go astray when they separated from the light of Torah that was in the same building.”

“A natural spring is a mikveh (ritual bath used to purify objects as well as people),” Rabbi Berger said. “The prophetic waters flowing from Jerusalem will be needed for sustenance but, more importantly, to purify the masses of people who will be coming to the Third Temple. The government must also be purified and rededicated, as must the rabbinate.”

“The simple reading is still the most important,” he said. “The prophet said that waters would flow from Jerusalem. And against all expectations, today, we are actually seeing this.”