For the mountains may move And the hills be shaken, But my loyalty shall never move from you, Nor My covenant of friendship be shaken —said Hashem, who takes you back in love. 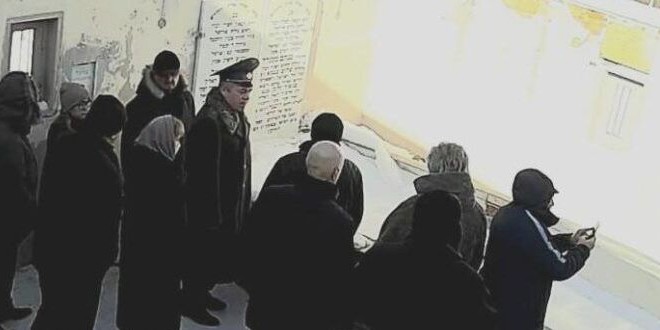 Approximately 15 Russian officers and military personnel appeared in the small town of Lyubavichi in western Russia. The town lacks paved roads, electricity, and other amenities, but it was reported in ColLive that the Russian soldiers came to the small town to pray at the gravesides of rabbis buried in the ancient Jewish cemetery.

The city was the birthplace of Chabad Lubavitch Hassidut, one of the largest sects of Judaism. Founded about 500 years ago, the name of the city means (appropriately enough) ‘brotherly love’. It was the seat of four generations of Chabad ‘Rebbes’ (spiritual leaders) between 1813 and 1915. The second Chabad Rebbe, Dovber Schneuri (1773–1827), moved from Lyady to Lyubavichi in 1813. The third Rebbe of Chabad, Menachem Mendel Schneersohn (1789–1866), and the fourth Rebbe, Shmuel Schneersohn (1834–1882) are buried in Lyubavichi.

The group included Jason Nadjafov Radjaf who was awarded the auspicious title of  “Russian Hero” by President Vladimir Putin, General Alexander Ilitz Sabaleir who was awarded a “Red Star” medal, “Hero of the Red Star Order” Colonel Alexander Ibnovitch, and the head of the paratroopers union of the Smolensk region, Alexander Lukin.

They reportedly came to pray “for peace between the countries in the region” and “to prevent a war.” They told the surprised Jews present that they had travelled to the remote site after hearing that prayers offered at the gravesides of the holy rabbis were answered.

Their visit commemorated the  33rd anniversary of the Russian withdrawal from Afghanistan. It is believed they all participated in that war which has been dubbed the “Soviet Union’s Vietnam” due to its grinding failure and demoralizing effect on the military. The Soviets’ failure in the war is thought to be a contributing factor to the fall of the Soviet Union.

While in the small town, they visited the memorial to the Jews of Lyubavichi who were killed in the Holocaust. The town currently has 200 inhabitants, none of whom are Jewish.

Chabad set up a visitors’ center in the small town and an estimated 10,000 people visited the center before the pandemic. Rabbi Gavriel Gordon who oversees the center explained to ColLive the phenomenon of non-Jewish supplicants at the rabbis’ gravesides:

“In recent years, the town Lubavitch has become a place where thousands come each month to Daven (pray),” Rabbi Gordon said. “Most are Jewish, but almost every day I meet non-Jewish people who heard about the place. People flock here from across Russia, and everyone is happily welcomed. I believe that the prayers of the senior officers will be accepted, and perhaps a war will be averted.”

Praying at the gravesides of holy rabbis is a Hassidic tradition. Just as these generals prayed at the graveside of rabbinic leaders of the Chabad branch of Hassidut in Lyubavichi from 160 years ago, Ivanka Trump prayed at the graveside of the last Chabad “rebbe”, Rabbi Menachem Mendel Schneerson, in New York before both elections her father ran in. The first prayer visit in 2016 was clearly successful as President Trump won an upset victory over Hillary Clinton. The second prayer visit in 2020 at the Chabad “rebbe’s” graveside was not as successful as the president lost his campaign effort. The gravesite,  known as the “Ohel”, is located in the Old Montefiore Cemetery in Queens, New York. Thousands of Jews and non-Jews visit his grave site every year to pray for blessings in the merit of the rebbe’s  righteous memory.