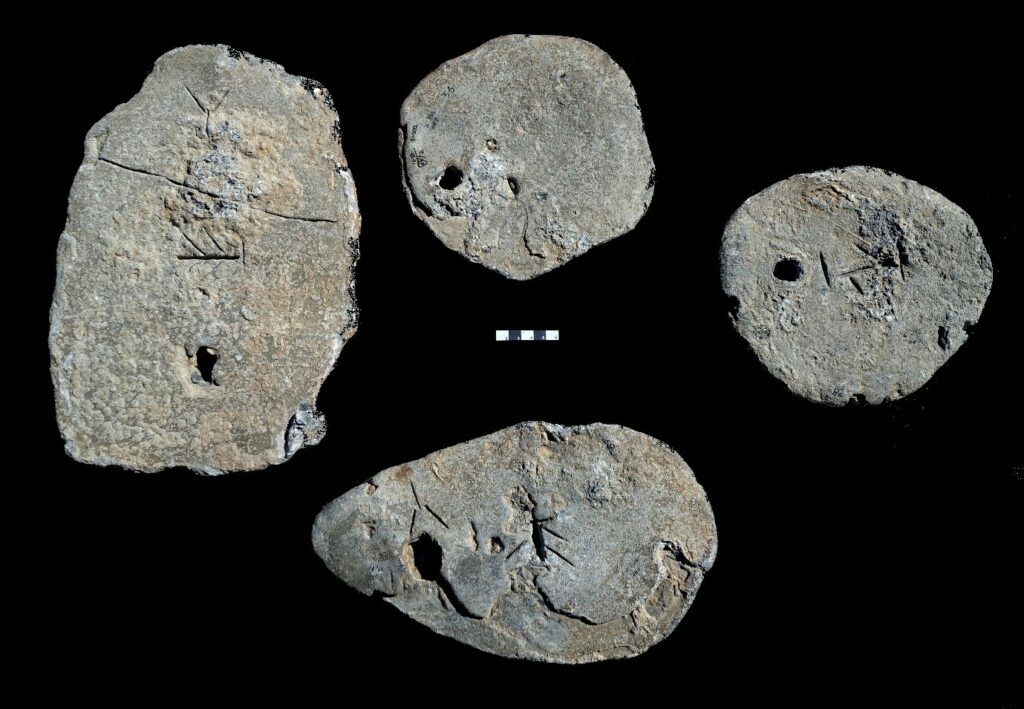 Although the Tribe of Zevulun, which began with the sixth son born to Yaakov and his first wife Leah, did not have giant ships to roam the seas, his father said that Zevulun’s descendants “shall dwell by the seashore; He shall be a haven for ships and his flank shall rest on Tzidon.”

The events of the Bible occur during the Bronze Age dated from 3000 to 1200 BCE, followed by the Iron Age. The Late Bronze Age of the Mediterranean Sea basin was an era characterized by regional relations and diplomacy among various societies, with trade and the exchange of gifts being common practices.  Now, lead ingots and stone anchors found among shipwrecked cargo off the coast of Israel reveal previously unknown trading links among distant countries, shedding light on commercial and diplomatic life in the area from 3,200 years ago.

Prof. Naama Yahalom-Mack Hebrew University of Jerusalem (HUJI)’s Institute of Archaeology collaborated with Prof. Yigal Erel at the Institute of Earth Sciences to determine the source of four lead ingots among a shipwreck’s cargo near the port of Caesarea. By studying the source of the lead and comparing their findings to other archeological artifacts from across the Mediterranean Sea, the researchers were able to prove that the ingots were made of lead mined in the central Mediterranean island of Sardinia.

In addition, the ingots had Cypro-Minoan markings which – although they are undeciphered to this day – are known to have been in use in Cyprus during the Late Bronze Age.  Accordingly, the researchers concluded that there were vast commercial ties between the two populations with the purpose of transporting raw material.

The findings have just been published in the Journal of Archaeological Science: Reports under the title “Incised Late Bronze Age lead ingots from the southern anchorage of Caesarea,”and was conducted in collaboration with Prof. Assaf Yasur-Landau and Dr. Ehud Galili at the University of Haifa’s Institute for Maritime Studies.

According to Yahalom-Mack, this study teaches us about the active role that the Cypriots had in trade during the same era and how far they were willing to go, given that Cyprus and Sardinia are located more than 2,500 kilometers (1550 miles) from one another – to import lead used to create luxury goods at the end of the era.

“We think that along with lead, they also imported tin, which was a sought-after metal in Cyprus and the surrounding area for making bronze. These three metals – copper, lead, and tin – were sold to port cities along the coastlines, including the shores of today’s Israel,” she added.

The lead ingots with Cypro-Minoan markings were found in the Caesarea anchorage. Lead isotope analysis indicated that the lead was mined in Iglesiente, Sardinia. Additional lead artefacts from the Levant, Cyprus and Egypt originated there. The results highlight the active role of Cypriots in Late Bronze Mediterranean trade.

The four lead ingots were found as part of a shipwreck cargo in the southern anchorage of Caesarea in Israel. Analysis of the lead and a study of the markings incised on three of them are presented here for the first time. Four Cypro-Minoan signs are identified and paralleled with signs found on Late Cypriot artefacts. Lead isotope analysis indicates that the lead originated in Sardinia. Such an origin was indicated by earlier analyses of lead ingots from other cargoes along the Carmel coast, as well as by additional lead objects from Cyprus and other regions around the eastern Mediterranean.

The Caesarea ingots, together with the latter, highlight the role of the Cypriots in the Mediterranean Late Bronze Age metal trade and date their involvement to the 13th century BCE to the early 12th century BCE. Rather than a specific connection between Cyprus and Sardinia at this time, as previously reconstructed, a broader commercial network and heightened involvement of the Cypriots in regional and supra-regional exchange in the eastern Mediterranean are suggested.