The Ayatollahs’ Men in Washington

Home » The Ayatollahs’ Men in Washington 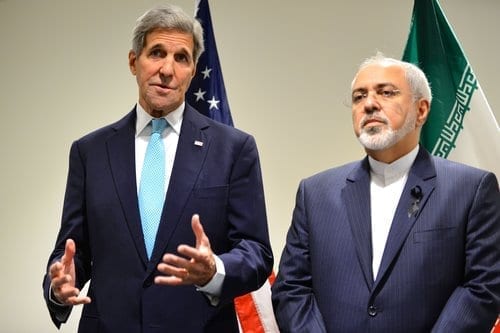 Former Iranian foreign minister Mohammad Javad Zarif recently co-authored a book in Farsi about the 2015 nuclear deal that tells us a great deal about how we should be assessing the nuclear negotiations taking place in Vienna between Iran and the P5+1 (the United States, Russia, China, France, United Kingdom and Germany). Titled, “The Nuclear Deal: The Untold Story of the JCPOA, Projecting Iran’s Security, Rights and Development,” the book sheds light on a critical question. Namely, how did the United States come to accept Iran’s negotiating terms on all the major issues despite bipartisan opposition to Iran’s illicit nuclear program?

Iranian human rights activist Heshmat Alavi translated the relevant portion of Zarif’s memoir on his Twitter account. Zarif wrote that in 2014, the regime decided to send a copy of their draft agreement to the other negotiating teams through “an individual in contact with the U.S. delegation and an active International Crisis Group (ICG) member.”

“The goal,” Zarif explained, “was to pave the path for lobbying for our draft agreement.”

Zarif wrote that the highly secretive move produced the desired result. After the ICG’s Iran desk officer Ali Vaez received Iran’s draft agreement, the ICG published its own policy paper, which he authored, that reflected the contents of the Iranian draft. Vaez’s paper, “Iran and the P5+1: Solving the Nuclear Rubik’s Cube,” was embraced by Americans and became the basis for the 2015 nuclear deal.

Until 2014, Vaez’s boss was Robert Malley, who joined the Obama administration that year after serving as the ICG’s program director for the Middle East and North Africa. Shortly after joining the Obama administration as Special Assistant to the President and the White House Coordinator for the Middle East, North Africa and the Gulf Region, Malley became a leading member of the U.S. negotiating team.

In 2017, Malley returned to the ICG as its head of policy, and later became its president. Malley left the ICG again in 2021 when President Joe Biden appointed him to serve as his envoy for talks with Iran.

As Alavi noted, the ICG denies that it served as a lobbyist and effectively as a proxy of Iran, presenting Iran’s draft agreement as its own. True or not, both Malley’s and Vaez’s records indicate that even if they didn’t launder Iran’s draft agreement to sell it to the Obama team, they have long been champions of the Iranian regime and apologists for its terror proxies. Both men support the full removal of nuclear sanctions on Iran. Last October, when Iran was still refusing to renew nuclear talks after the change of government in Tehran, and so signaling Washington that it would accept no meaningful restraints on its nuclear program, Malley said, “We are prepared to remove all of the sanctions that were imposed by the Trump administration.”

Vaez, for his part, has defended Iran’s nuclear program, attacked sanctions and defended Iran’s missile program, among other things. He has praised the current government, led by Ebrahim Raisi, known as “the butcher of Tehran” for his central role in the mass murder of tens of thousands of dissidents in the 1980s.

Malley and Vaez have served as apologists for Iran’s terror proxies Hezbollah and Hamas. In 2008 Malley was dropped from the Obama presidential campaign after it was revealed that he maintained significant contacts with Hamas and Hezbollah terrorists. Malley defended his ties to terrorists recently. As Malley put it, “It’s a mistake” to think of Hamas and Hezbollah only as terrorist groups. In his words, “They are social movements, probably the most rooted movements in their respective societies.”

Alavi documented that the Iranian state media referred to Vaez as “Zarif’s protégé,” and as the individual “who played the main role in composing the 2015 nuclear agreement text.”

The Iranian media also reported that in the current negotiations Vaez is serving as the intermediary between the United States and Iranian delegations in Vienna together with Russian Ambassador Mikhail Ulyanov.

When Biden appointed Malley to serve as his chief envoy to the talks with Iran, many commentators claimed that the move was geared towards pleasing the Bernie Sanders/Squad wing of the Democrat Party. Biden, they argued, is much more moderate than Malley. Although comforting, this claim ignores Biden’s long record of support for the Iranian regime, whether as a senator, as the vice president, or now, as president.

In 1979, like then-president Jimmy Carter, Biden supported Ayatollah Khomeini and his revolutionaries when they overthrew the Shah and transformed Iran into an Islamic theocracy. Unlike Carter, who soured on Khomeini and his henchmen after Iranian revolutionaries stormed the U.S. embassy in Tehran and took U.S. diplomats hostage, Biden continued to support them. Throughout the hostage crisis, Biden was one of the most outspoken opponents of strong U.S. action being taken to free them in the Senate.

In the wake of the Sept. 11 attacks, then chairman of the Senate Foreign Affairs Committee Biden advocated sending Iran a gift of $200 million to show U.S. support for the Islamic world.

Biden was the architect of the U.S. withdrawal from Iraq in 2011 that effectively transferred control of the country to Iranian surrogates and proxies. Biden was one of the most outspoken supporters of then-president Barack Obama’s decision to negotiate the nuclear deal with the mullahs despite the fact that it gave Iran an open road to a nuclear arsenal and upended the U.S. alliance structure in the Middle East, imperiling America’s Arab allies and Israel.

After then-president Donald Trump abandoned the nuclear deal in 2018 due to Iran’s breach of the limitations the deal placed on its nuclear activities, Biden vowed that he would return to the deal if elected.

Shortly after his election, he removed Iran’s Yemeni proxy, the Houthis from the list of foreign terrorist organizations. He ended the effective enforcement of U.S. sanctions against Iran and over the past year has abrogated many of the most effective sanctions. Biden also persuaded South Korea and Qatar to pay Iran billions of dollars.

And Biden appointed Malley to lead the U.S. negotiating team. Far from seeking to stiffen Malley’s placatory position on Iran, Biden has given him full backing against all detractors.  When Prime Minister Naftali Bennett refused to meet with Malley during his visit to Israel last November, Biden reacted with rage. Biden took his revenge on Bennett by refusing to speak with the Israeli premier for several months.

Two weeks ago, three members of the U.S. negotiating team in Vienna resigned. Led by Malley’s deputy, international sanctions expert Richard Nephew, the three viewed Malley’s genuflection towards Iran as counterproductive. According to The Wall Street Journal the three men believed that given Iran’s nuclear progress, the 2015 deal was no longer relevant. They also advocated censuring Iran for its breaches of the nuclear deal through the International Atomic Energy Agency. The dispute between Malley and Nephew was brought before Biden. Biden sided with Malley. Nephew and his colleagues resigned.

The consonance between Malley and Biden’s policies leads inevitably to the conclusion that the administration is not a partner to those seeking to block Iran’s path to nuclear weapons. It is Iran’s partner. No deal that Biden is interested in will block Iran’s path to a nuclear arsenal. If a deal is concluded, Iran and its terror proxies will be its only beneficiaries. They will be enriched by the abrogation of the sanctions.

How is this reality reflected in Israel?

The Bennett-Lapid-Gantz government’s actions on Iran give the impression that Israel’s leaders will not accept that this is the reality in which we operate. Monday, after speaking with Biden for the first time in months, Bennett said that Israel is maintaining its freedom to act “in any situation,” regardless of whether an agreement is reached between Iran and the world powers.

Who was Bennett speaking to when he said that?

He wasn’t talking to the domestic audience. There’s no debate in Israel about whether Israel should retain its ability and freedom to act independently to prevent Iran from developing nuclear weapons. Israelis take it as a given that this is the government’s policy.

The obvious audience for Bennett’s statement was the Biden administration. Bennett’s statement, like his dispatch of his national security adviser Eyal Hulata to Washington last week, demonstrated that Bennett still believes Biden is interested in what Israel has to say, that Israel can influence Biden’s stance on Iran. And Bennett is not alone. Foreign Minister Yair Lapid and Defense Minister Benny Gantz also have made clear by their statements and actions that they do not understand that Israel has no one to work with on anything related to Iran in the Biden administration.