By the word of Hashem the heavens were made, by the breath of His mouth, all their host. 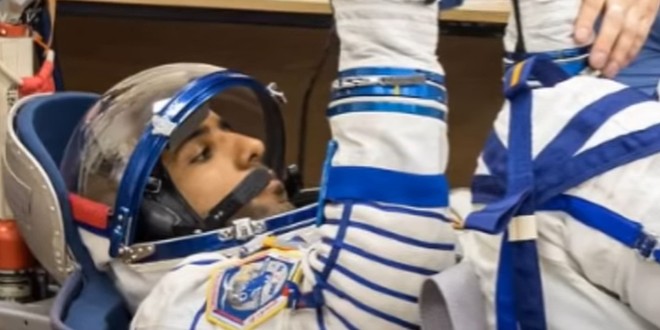 On Thursday, as a sign of the latent aspirations for peace in the region, Hazzaa al-Mansoori, the first astronaut from the United Arab Emirates, gifted an Israeli flag to Israeli officials at the Expo 2020 in Dubai. Al-Mansoori had carried the flag with him when he visited the  International Space Station in 2019, one year before the Abraham Accords were signed, normalizing relations with Israel.

This morning we hosted a very dear & special guest at the Israel pavilion at @ExpoDubai2021, the first Emirati astronaut. @astro_hazzaa gifted us with an Israeli flag he took with him on his first mission to the International Space Station. Thank you (& may the force be with you) pic.twitter.com/DGdgXzJmSG

“This is a gift for all Israelis,” al-Mansoori said at the pavilion, according to the Ynet news site. “I am happy to be here and to give the Israeli flag as a gift to the people here and to the public in Israel,” he said.

At the event , Al-Mansoori expressed his intent to visit Israel in the near future as soon as pandemic travel restrictions permit. He is expected to visit the Ilan Ramon Museum and Memorial in Mitzpe Ramon during his planned stay in the Jewish state.

“It was a precious, touching gift to receive,” said Josh Bandit, the Israeli pavilion organizer. “To come dressed in his spacesuit and visit our pavilion – it shows a genuine caring for Israelis,” Bandit added.

In September 2019, al-Mansoori became the first Emirati in space and the first Arab to travel to the International Space Station as part of Expedition 61. It is interesting to note that the mission included  Jessica Meir, an Israeli-American astronaut.

Media reported on his mission including the objects he carried into space which included a silk UAE Flag, 30 seeds of the symbolic Al Ghaf tree, a copy of the Quran, a picture of Sheikh Zayed Bin Sultan Al Nahyan, and a book titled ‘Qissati’ written by 6Sheikh Mohammed Bin Rashid Al Maktoum. He also took traditional food to host his fellow astronauts on the space station. He also reportedly carried a photo of his family and some personal items, which clearly included the Israeli flag.

In October, Israel and the UAE signed agreements to collaborate on a number of space projects including a joint launch of the “Beresheet 2” space mission to the moon. Israel was unsuccessful in its first attempt to land on the moon. If the planned joint venture proves successful, the flags of the two countries will stand side by side on the lunar surface in 2004.