Girl on PA TV: “We’ll Trample the Necks of the Zionists”

Home » Girl on PA TV: “We’ll Trample the Necks of the Zionists” 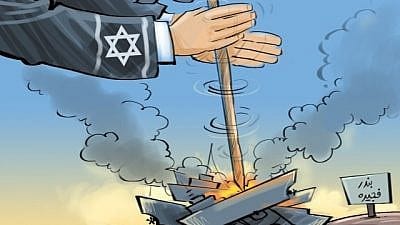 As Palestinian Media Watch has exposed and is clear by the way Palestinian children speak on PA TV, the PA educates its youth to admire terrorist murderers. In addition, they see violence and terror as valid and see the murder of Israelis/Jews as a right because Jews, they claim, don’t have any history in the land and their presence “defiles” it.

All these messages are exemplified in this poem recited by a young girl and dedicated to all the imprisoned terrorists. The girl “swears by the Jihad fighters” and specifies that “we will trample the necks of the Zionists and make a path out of them”:

Rama: “I send greetings to all the male and female prisoners and especially to my uncle Ayman [Al-Dik]… and I dedicate a poem to them with sounds of joy:
Do not think that the prison has humiliated us,
Our rifles are on our shoulders, and our spoons [to dig out of prison] are in our hands
I swear by your head, Ayman, and by the Jihad fighters and prisoners
We have seen trouble many times in Palestine and we were saved from it…
We will trample the necks of the Zionists and make a path out of them.”

PMW has exposed a song and music video broadcast by Hamas using the same phrase: “We will trample the necks of the enemies.” Video footage of a Hamas missile hitting an Israeli army bus and a staged stabbing of a religious Jew was included in the Hamas music video.

“O occupier, wait for a green [light]. Receive this reduced image. See how the Kornet [missile] travels slowly…
We are the ones who threaten, and no one threatens us
We are the nation’s only sword
We will strike, we will blow up [and] not hesitate
We will do more against the enemy if he continues…”

The PA TV program on which the girl’s performance was broadcast, Giants of Endurance, serves the Palestinian prisoners and their families by passing on greetings, updates, and videos from the terrorists’ relatives. Not long ago, the program broadcast home videos of two even younger girls singing songs that presented an antisemitic view of Jews, demonizing them as “impure” and “the world’s dogs”. One song also glorified violence and terror:

The PA also educates its children to deny Israel’s right to exist and to envision a world with only “Palestine” and no Israel, no Jews, no Zionists.

Ayman Al-Dik – the girl’s imprisoned uncle. PMW was unable to determine the nature of his crimes.

“Our spoons are in our hands” refers to the 2021 2021 Gilboa Prison escape – 6 Palestinian terrorist prisoners escaped from Israel’s Gilboa Prison on Sept. 6, 2021, by widening the hole of the shower drainpipe in the floor of their cell. One terrorist is from Fatah – Zakariya Zubeidi, and the other five are from Islamic Jihad – Ayham Kamamji, Muhammad Ardah, Mahmoud Ardah, Yaqub Qaderi, and Munadil Nafiyat. Four of the terrorists were recaptured after five days: Zubeidi, Ardah, Ardah, and Qaderi. Kamamji and Nafiyat were arrested in Jenin on Sept. 18, 2021 along with two accomplices. Zubeidi was head of the Al-Aqsa Martyrs’ Brigades (Fatah’s military wing) in the Jenin area during the PA terror campaign (the second Intifada, 2000-2005), when he oversaw numerous lethal attacks, and he also carried out shooting attacks in 2018-2019. Kamamji participated in the murder of 18-year-old Eliyahu Asheri on June 25, 2006, and planned to blow up a bus using an exploding car. Muhammad Ardah participated in initiating and executing a suicide bombing on bus no. 823 on Nov. 29, 2001, in which 3 people were murdered and many others were wounded. Mahmoud Ardah was involved in numerous attacks; the website of Islamic Jihad’s military wing defined him as the “commander” of the prison escape. Qaderi committed a shooting attack on Sept. 18, 2002 with an accomplice in which Israeli Yosef Ajami was murdered and a foreign worker was wounded. Nafiyat was being held in administrative detention.