Bat pups learn how to navigate like young children; learn the way to school and back

On that day, men shall fling away, to the flying foxes and the bats, the idols of silver and the idols of gold which they made for worshiping. Isaiah 2:20

Home » Bat pups learn how to navigate like young children; learn the way to school and back 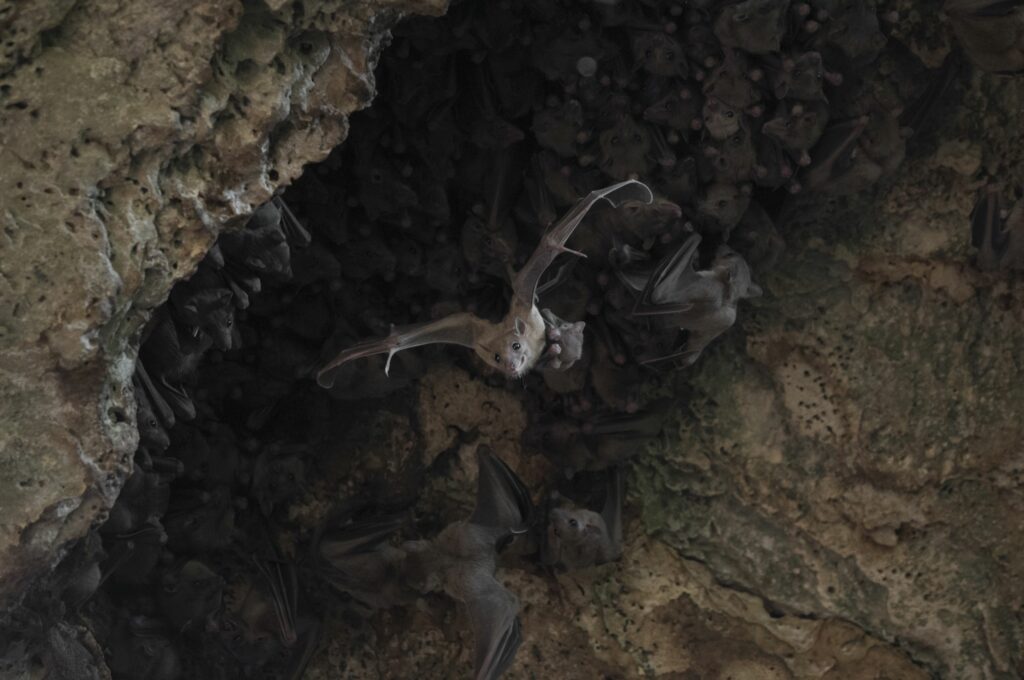 It’s usually mothers who take their young kids to daycare, the supermarket, and other places – and the children learn navigation from these experiences. But how do bat pups learn about getting about?

“While children walk beside their parents, bat pups are carried by their mothers, learning navigation from the ‘back seat,’ ” according to researchers at Tel Aviv University (TAU) who attached tiny GPS devices to both pups and mothers to monitor their flight.

It has been revealed for the first time in the world that observing from their mother’s back is how the pups learn to navigate. The mother bat carries her pup every night from the moment of birth, drops it off at a specific tree the mother bat carries her pup to a specific tree that serves as a “nursery” where it stays alone or with a friend for several hours until mom completes her business of gathering food and returns to carry it back to the cave. Through this repetition the pup learns how to navigate on its own and begins to fly about independently, gradually expanding its circle of navigation in a relatively familiar area.

The study was led by Prof. Yossi Yovel, head of the Sagol School of Neuroscience, senior researcher at the School of Zoology at TAU’s Wise Faculty of Life Sciences and Steinhardt Museum of Natural History, and 2021 recipient of the Kadar Family Award. Dr. Aya Goldshtein and Dr. Lee Harten from Prof. Yovel’s laboratory also took part in the study. The paper was published in the journal Current Biology under the title “Mother bats facilitate pup navigation learning.”

In addition to the tiny GPS devices, to track both simultaneously and measure wing movements, the researchers attached accelerometers to both the bat mothers and pups. In this way, they were able to identify several stages in the development of the pups’ navigational abilities.

“Many animals must become independent at a very young age in order to survive,” noted Yovel.

“For flying animals, the ability to navigate on their own to sources of food is an essential aspect of independence. Thus, for example, young fruit bats, which are the focus of this study, are required to navigate every night over long distances – sometimes dozens of kilometers – to reach a specific tree or group of trees where edible fruit can be found. Even when they succeed, they still face the challenge of finding their way back home to their colony’s cave. In our study, we wanted to find out how they learn to do this.”

“We discovered that at first mothers carry their pups on their bodies all night long,” added Harten. “Even when the GPS indicated that mother and pup were at the same location, the accelerometers proved that the pup was being carried by the mother rather than following her. At the second stage, up to the age of about 10 weeks, the mother carries her pup to a specific tree, located no more than a kilometer from the cave. Gradually the pup starts flying from the ‘nursery’ to nearby trees, constantly expanding its circles of navigation. We believe that the ‘nursery’ tree is chosen by the mother as a starting point, an anchor not too far from home, from which the pup can navigate to other places. The tree also serves as a meeting place for mother and pup if the little one happens to get lost.”

“At the next stage of the process, mom leaves her pup in the cave, expecting it to come out on its own. If it shows no such initiative, she goes back to the previous stage and carries it to the ‘nursery.’ In addition, at night’s end, she makes sure that the pup has made it back home, and if the pup is late, she looks for it at the ‘nursery’ tree and helps it find its way to the cave. At the final stage, starting around the age of 10 weeks, the pup is already independent, searching for food on its own every night,” said Goldshtein. “To begin with, it flies to the familiar ‘nursery’ tree, then goes on to nearby tress, gradually expanding its circle of navigation.”

“One interesting conclusion from this study is that the bat pup never follows its mother,” concluded Yovel. “At the beginning, carried by its mother, it learns navigation from the back seat.’ Later on, it practices on its own, in growing circles around the familiar ‘nursery’ tree that serves as an anchor or landmark. It is important to note that the process whereby the young learn from their parents can save evolution millions of years. Human children rely extensively on this type of learning, and the present study shows that animals do the same.