Nubia, Put, and Lud, and all the mixed populations, and Cub, and the inhabitants of the allied countries shall fall by the sword with them. 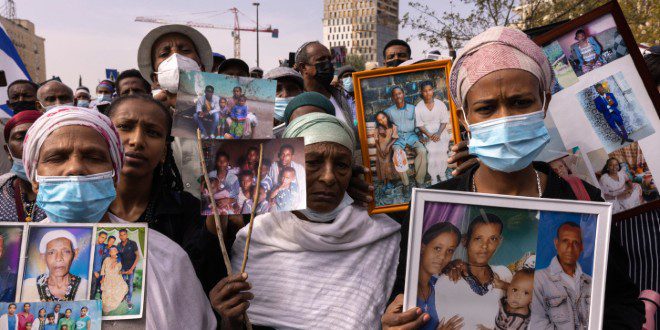 Divergent elements in the Israeli government have come to a compromise, agreeing to expedite an airlift that could potentially extract around 5,000 of the remaining Jewish Ethiopians from their war-torn country.

Aliyah and Integration Minister Pnina Tamano-Shata and Interior Minister Ayelet Shaked reached the compromise on Tuesday, settling a rift that had sparked protests in Jerusalem. Tamano-Shata threatened to leave the government and bring down the coalition government led by Naftali Bennett if the Israeli government does not act to help the Jews in Ethiopia. The plan applies only to Ethiopians who already have first-degree relatives in Israel.

On Sunday, hundreds of Ethiopians demonstrated outside the government ministry buildings on Kaplan Street in Jerusalem, calling for an “Operation Solomon II” to bring their relatives to Israel.

All Ethiopian Jews, about 40,000, immigrated to Israel in several waves during the 1980s and ’90s. But there remain about 9,000 Ethiopians called Falasha Mura who are the descendants of Jews who converted to Christianity at the end of the 19th century and are therefore not eligible for aliyah under the Law of Return. In 2015, the government passed Resolution 716 to bring all remaining members of this group to Israel, and around 4,500 have arrived since then but for budgetary reasons, bringing in the rest has been delayed.

Since the list was drawn up in 2010, another community claiming Jewish descent of 5,340 people from the Gojjam region has also requested to immigrate to Israel.

Israel has airlifted 2,000 Jews out of Ethiopia since December. Last week, Ethiopia’s Prime Minister Abiy Ahmed Ali told Israel’s Prime Minister Naftali Bennett that some of these emergency evacuees were, in fact, officers implicated in war crimes. At least four of those evacuated to Israel were officers who engaged in war crimes, with at least one of those involved in a massacre that took place in Ethiopia’s Tigray region as the civil war that has been raging in the region for over a year intensified recently.

On Tuesday, a Channel 13 report cited a security source as saying that the Israeli government assured the Ethiopian government that they will review the matter and return any of the new immigrants who misrepresented themselves or who are believed to have been involved in war crimes.

Rebel forces are waging a year-long civil war in the Tigray region of Ethiopia in close proximity to the Falasha Mura. They currently threaten the capital of Addis Ababa. With the situation so perilous, concerns have increased for the communities of Ethiopian Jews and descendants of Jews who remain in the country.