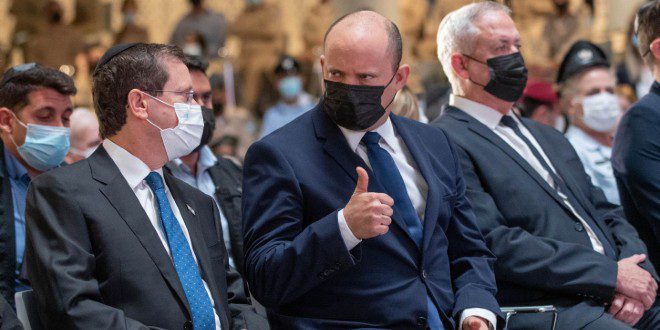 Photos that emerged last week of Israeli lawmakers munching on candy for two white nights in a row served as a perfect metaphor for the kindergarten-like atmosphere of the Knesset as a whole and the current government in particular.

Though the assortment of sweets was there for a “serious” purpose—to provide an energy boost to the exhausted parliamentarians during the wee hours of Thursday and Friday, when they debated and voted on the 2021 and 2022 state budgets—there was something both comical and disconcerting about the display.

The sight of Defense Minister Benny Gantz sucking on a pink lollipop, for example, was a bit cringe-inducing. The mullahs in Tehran must have gotten a kick out of it. Or at least wondered why the Israeli figure charged with targeting Iran’s nuclear facilities opted for a sucker over strong Middle Eastern coffee.

In fairness to Gantz, he wasn’t alone. Indeed, the whole lollipop-licking plenum looked as puerile as it’s been sounding these days, with childish verbiage and decibel levels not even fit for a playground.

Nor did the final passage of the budgets put a stop to the infantile behavior. On the contrary, the aftermath of the marathon that kept the government from falling has been just as embarrassing, if not more.

Two blatant cases topping the headlines and TV panels are that of coalition chairwoman Idit Silman and Knesset member Shirley Pinto, both members of Prime Minister Naftali Bennett’s Yamina Party. The former is making waves for dubious claims that she was physically assaulted at a gas station. The latter, a deaf-mute activist with a sign-language interpreter, is causing a stir for referring to fellow Yamina MK Amichai Chikli as a “virus” that’s spreading in the Knesset.

Silman’s account of having been pushed violently against her car by a man who approached her while she was filling her tank has so many holes in it that even the government’s apologists are having a hard time using it as fodder to attack the opposition, led by former Prime Minister Benjamin Netanyahu.

For one thing, she’s been unable to recall the exact date or location of the incident. And when CCTV footage from the service station in question came up empty, she tweaked her tale.

Asserting suddenly that the encounter took place beyond the premises of the pumps, she said that she was, in fact, already close to the highway when it happened. This would mean that she was already behind the wheel, however, raising questions about how she could have been hurled against the vehicle if she was inside it.

Details aside, the aim of the “revelation” was to bemoan the social-media and other incitement perpetrated by disgruntled Yamina voters, and to suggest that they’re fomenting an atmosphere similar to that which preceded the assassination of Prime Minister Yitzhak Rabin in 1995. These are supporters who feel betrayed by the right-wing party that joined forces with the left in order for Bennett to fulfill his dream of the premiership, even though it entails handing the reins over to Foreign Minister Yair Lapid, head of Yesh Atid, in 2023.

Though it’s true that many rude fanatics have been voicing their discontent in a vile and threatening manner, most of those disappointed with having cast their ballots for Bennett are not violent, verbally or otherwise. They’re merely tearing out their own hair.

This brings us to the second, related storm that’s making the rounds: Pinto’s false and below-the-belt description of Chikli. Calling him a “virus” while the world is in the throes of the COVID-19 pandemic is so unacceptable that even those who tend to tiptoe around her due to her disability couldn’t let her words slide without a follow-up, especially since she recently posted on Twitter, then quickly deleted the tweet, that Netanyahu incited Rabin’s murder.

The “clarification” that she came up with was as ridiculous as her initial accusation. Chikli, she said, is like a “computer bug” infecting the political system. This, she explained, was the “virus” to which she had referred.

As if that’s any better.

The irony, of course, is that Chikli is the sole Yamina MK who’s remained loyal to his party’s original platform and ideology. If anything, then, he’s a geek trying to restore a crashed hard drive.

Furthermore, he seems to be the only one in the now-difficult-to-identify faction who remembers that it was precisely the national-religious right (from which Yamina hails) that was blamed by the left for Rabin’s death at the hands of Yigal Amir.

Chikli’s refusal to jump on the amnesia bandwagon, therefore, should be to his credit, not his detriment. But his previous proverbial comrades-in-arms haven’t just been eating the Knesset candy; they’ve been drinking the Kool-Aid.