"Praise the Lord, all you nations; extol him, all you peoples. For great is His love toward us, and the faithfulness of the Lord endures forever." 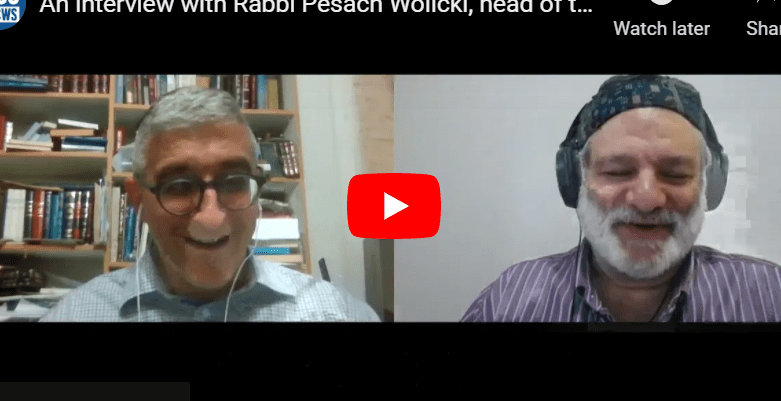 Rabbi Pesach Wolicki, the new executive director, is not entirely new to the CJCUC, having served as the associate director until 2019.

In an interview with Israel365 News, Rabbi Wolicki explained the unique and necessary mission of the CJCUC. Unlike many interfaith organizations, the CJCUC’s mission is not fundraising but to express gratitude and to “reach a hand across the aisle” to build relationships.

“We live in an age in which millions of Christians around the world feel connected to the Jewish people and Israel, and to the Biblical story that is unfolding in our times; the long-awaited mass return of the Jewish people to Israel after a lengthy exile,” Rabbi Wolicki explained to Israel365 News. He noted that for several years, the Christian community has been expressing this connection through pilgrimages to the Holy Land and through lending political and financial support for Israel. “And yet, from the Orthodox Jewish community in Israel and its rabbis, there has never really been an institutional response.”

“The entire convention was about 150 people,” Rabbi Wolicki said. “Today, single organizations can have hundreds, if not thousands of participants. It’s a different world.”

Rabbi Wolicki explained that a welcome result of this is that Christian-Jewish relations were now so developed that people outside of Israel have many options to express this connection.

“Now, if a Christian wants to study Bible from rabbis, not only does the internet afford them the possibility, but the internet affords them many opportunities that are tailor-made for Christians,” Rabbi Wolicki said. He is also working on a program connecting rabbis in the US with their Christian counterparts. “There are also many Jewish scholars who travel around, as I do, to visit churches to speak to Christian groups.”

Yet CJCUC plays a unique role in this expanding field.

“So much of what goes on from the Jewish side is still unfortunately seen by the Jewish community as outside of the box and on the margins. One of our main missions is to bring Jewish-Christian relations into the mainstream of Orthodox Judaism.”

Towards this goal, the CJCUC is developing a curriculum to teach Orthodox Jewish day schools about Christianity and its support for Israel.

“The only thing Orthodox Jews know about Christianity is the persecution of the Jews by the Church,” Rabbi Wolicki said, “It colors everything about the relationship. Jews who are opposed to relating to Christians will bring up things like the Spanish Inquisition. This happened over 500 years ago but for Jews, this might as well have happened yesterday. When a Jew sees a Christian today, they say ‘that person was persecuting me 500 years ago. Jews, as individuals, identify with all of the Jews all the way back to Sinai. This has good and bad aspects.”

“There’s a lot of issues that need to be ironed out,” Rabbi Wolicki admitted.

The Center for Jewish–Christian Understanding and Cooperation (CJCUC) was established in 2008 by Rabbi Dr. Shlomo Riskin. It is an educational institution focused on educating both Christians and Jews dedicated to enabling religious dialogue, mutual understanding, and active cooperation between Orthodox Jews and Christians.

In a previous interview with Israel365, Rabbi Wolicki explained how his Jewish faith requires him to connect with Christianity.

“Judaism is a universal faith,” Rabbi Wolicki said. “All are included in serving the one God, the God of Israel. Maimonides taught that Christianity, despite the problematic history of antisemitism, would lead the world to faith in the God of Israel. Just as I see the State of Israel as the beginning of our redemption on the national level. I see the growing friendship between Jews and Christians as the beginning of the universal redemption in fulfillment of Maimonides’ teaching.”

Rabbi Wolicki published a book on the Hallel Psalms (113-118) as a theology for Jewish-Christian understanding entitled Cup of Salvation: A Powerful Journey Through King David’s Psalms of Praise that has been praised by both Christian and Jewish scholars.

Rather than focus on the differences that separate the two religions, the CJCUC focuses on the Bible, what they call “the cornerstone for the spiritual relationship between Jews and Christians…as the bedrock on how to live a Godly life”

Unique among Orthodox Jewish organizations, the CJCUC  released a statement titled “To Do the Will of Our Father in Heaven: Toward  Partnership between Jews and Christians” in 2011. They also facilitated the first Orthodox Rabbinic Statement on Christianity in December of 2015, which more than 75 Orthodox Rabbis have signed. Being both powerful and unprecedented, the statement garnered much criticism. Many Orthodox Jews have criticized the CJCUC’s unprecedented nature of calling for further connection between Jews and Christians, arguing (incorrectly) that such a relationship violates tenets of Jewish law.

Another groundbreaking initiative of the CJCUC was the Day to Praise. In 2014, Rabbi Riskin became the first Orthodox rabbi to invite Christian visitors to Israel to participate in a “praise rally” to recite Psalms alongside Jews on the 67th anniversary of Israel’s Independence Day. The event was repeated several times on Jewish holidays on which Psalms are traditionally recited by Jews.