3I will bless those who bless you And curse him that curses you; And all the families of the earth Shall bless themselves by you.” 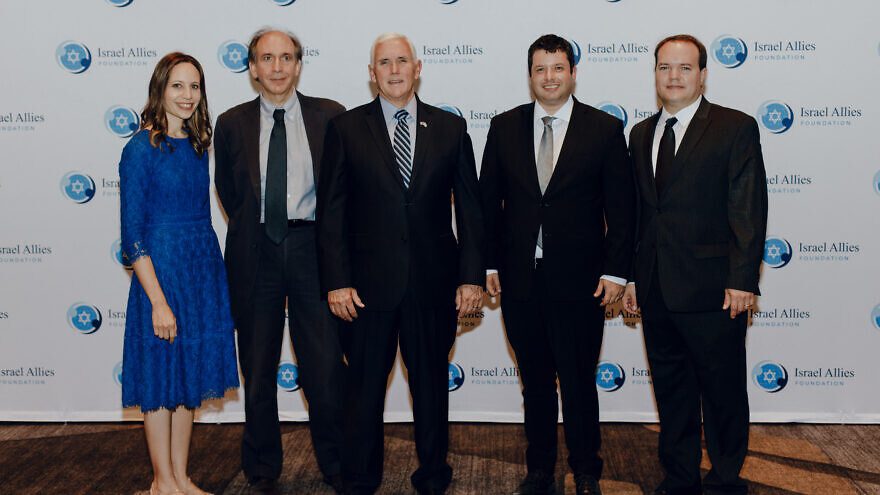 Israeli Ambassador to the United States and the United Nations Gilad Erdan and former Vice President Mike Pence addressed hundreds of Christian supporters of Israel at the Israel Allies Foundation Gala Awards in Texas on Wednesday.

“The BDS movement which seeks to demonize Israel is actively fanning the flames of anti-Semitism with the help of its supporters in Congress and European parliaments. In the face of the lies that some spread about Israel on Capitol Hill, I know that we can count on you to be our Iron Dome of truth,” Erdan told the gathering.

Erdan, who was deputy chair of the Knesset Christian Allies Caucus when he served in the Knesset, said Christian support for Israel and the Israel Allies Foundation around the world creates a “lasting impact of immense proportions.”

“For that, the State of Israel could not be more grateful,” he added.

Pence spoke about the Trump administration’s accomplishments regarding Israel and the Middle East, including moving the U.S. embassy from Tel Aviv to Jerusalem and helping to broker the Abraham Accords.

He also criticized the Biden administration and progressive Democrats in Congress for eroding bipartisan support for Israel.

“The bipartisan consensus that once supported the U.S.-Israel relationship has begun to erode in one of the two major political parties in this country,” he said.

“Leading Democrats in the House of Representatives recently tried to deny funding for the Iron Dome in Israel after a hailstorm of rockets had descended on the people of the State of Israel. And our current vice president told a student at George Mason University that ‘their truth should not be suppressed’ when they accused Israel of ethnic genocide,” he said. “It must be the position of the United States of America that anti-Zionism is anti-Semitism.” Josh Reinstein, president of the Israel Allies Foundation, said Pence and Erdan “spoke beautifully about the importance of faith-based diplomacy.”

“All over the world, millions of Christians are standing with Israel, and they are bringing the countries with them,” he said.

A delegation of leaders from Latin America also came to the proceedings, as did Guatemalan Ambassador to United Nations Luis Lam Padilla.

Herzl Makov was the evening’s honoree, receiving the Israel Allies Award for his loyal dedication to Israel as demonstrated through his previous roles in the Israel Defense Forces, Prime Minister’s Office, the Jewish Agency for Israel, World Zionist Organization and for his current role as CEO of the Menachem Begin Heritage Center.