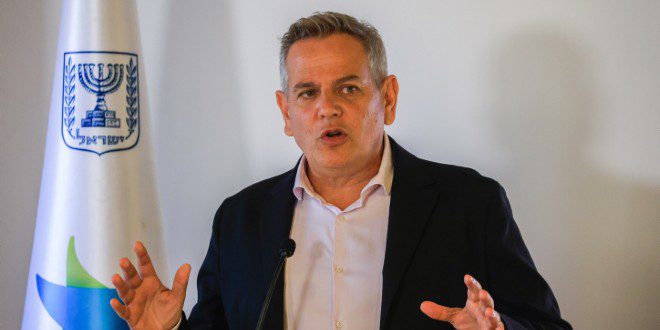 If anything illustrates the farcical nature of the current makeup of the government in Jerusalem, it’s the parley in Ramallah on Sunday evening between Palestinian Authority leader Mahmoud Abbas and a delegation of Israel’s Meretz Party, headed by Health Minister Nitzan Horowitz.

Horowitz didn’t even bother to obscure his exit from a meeting of the ministerial committee on fighting the coronavirus, which hadn’t convened since the end of August, in order to make his appointment at the Muqata. But then, his role as the country’s most senior official charged with handling the pandemic is secondary to his true ambition: Palestinian statehood by way of an Israeli withdrawal to the 1947 armistice lines.

Firstly, it was to show their voters that, despite their party’s sitting in a coalition with and under politicians traditionally from the right, it’s still committed to Israeli capitulation at all costs. Secondly, it was to signal to Abbas that he has the power to achieve their shared goal.

In one respect, he’s correct. Every party in the coalition possesses the leverage to cause it to fall.

But just like any of the strange bedfellows able to use this option as a threat, none has the desire to follow through with it. They all realize that in such an event, what awaits them on the “day after” is political exile.

In the meantime, each enjoys a degree of freedom from facing the electorate for a fifth time in two-and-a-half years. And Meretz is milking its ability to go against the wishes of Prime Minister Naftali Bennett and discuss policy with Holocaust denier Abbas—a “pay for slay” terrorism instigator who’s been refusing to engage in talks with Israel since 2014.

“Meretz has a task within the government: to keep the two-state solution alive, not let it disappear, and not sabotage the chance of reaching it in the future,” Horowitz told the octogenarian P.A. chief. “Because there is no other solution.”

It would be almost amusing if it weren’t such a lie. Abbas has made it clear, time and again, that this is not his aim.

“We [in Meretz] believe that there’s no room for unilateral measures that would harm the chances of implementing the two-state solution. No new settlements, no illegal outposts and no violence by extremists among the settlers.”

Fatah’s propagandists couldn’t have expressed that last bit better themselves.

“It is my duty, our duty, to promote joint action,” Horowitz continued. “We arrived today to rebuild a direct and permanent channel between [Israel and the P.A.], and to give a ‘booster [shot]’ to the cooperation.”

Frej chimed in, as well.

“We are here to promote a two-state solution; to say that you are our partner,” he stated. “The future is important, but we must first act to make the present better, and for that we need cooperation between ministries and governments.”

Rosin made reference to the fact that other Israelis didn’t back the visit.

“We came here openly; didn’t hide. On the contrary, we came with pride. We’ll do everything necessary to advance the two-state solution, to build the practical foundations for peace.”

The fact that Abbas has never been interested in a two-state solution—or any arrangement, for that matter—either doesn’t occur to Meretz or its members don’t care. Their main objective, after all, is to place the blame for the plight of the Arabs ruled by Fatah in Judea and Samaria and by Hamas in Gaza on Israel. It’s a false narrative that Abbas promotes on purpose, as it provides him relevance in the international arena—stature that he utterly lacks among his own people.

Awareness of this fact is responsible for his postponement, yet again, of the P.A. legislative elections, which this time around were slated for May, after a nearly 17-year reign. It was a vote that he was certain to lose and he knew it.

It seems that only the left in Israel and elsewhere in the West still buys the bull. The rest of the population in the Jewish state and abroad has grasped that until there is genuine internal change in Palestinian society and an end to backing by Iran, no peace of any kind is possible.

It is thus that the Abraham Accords are a thorn in Abbas’s side. Not, however, as the likes of Meretz would have one believe because the P.A. wasn’t included. No, the real cause for anger on the part of the “peace camp” is that the deals signed between Israel and the United Arab Emirates and Bahrain, shorty followed by others with Morocco and Sudan, belie the fantasists’ longstanding failed paradigm.

The good news is that Horowitz and his gang had zero effect on Abbas, other than to give him the opportunity to fabricate a call for talks with Israeli figures, such as Lapid, Bennett and Interior Minister Ayelet Shaked.

“It won’t happen,” Shaked tweeted. “I won’t meet with a Holocaust denier who is suing Israeli soldiers at The Hague and paying the murderers of Jews.”

Bennett didn’t respond. Lapid’s tactic was to warn against cracks in the coalition.

“In recent days, Knesset members and ministers have been acting as if all the problems are behind us. Everyone has started pulling in their own direction, making unnecessary headlines, acting as if this government is self-evident,” he posted on Twitter. “[But] the last thing that can be said about the government is that it is self-evident. It’s a miracle. More than that, it’s a fragile miracle, which happened against all odds. Instead of everyone pulling in their own direction, our job is to pass a budget. We have five weeks where we all have one task: to pass a budget. Without it, there will be no government. Without it, no one will fulfill his dreams.”

One thing that’s become evident since this “fragile miracle” was foisted upon the Israeli public is that apparently “no one will fulfill his dreams” while it’s in power, either, except for the countries’ enemies emboldened by the hodge-podge.