Six terrorists tunnel out of high-security prison in northern Israel

Let anyone who does not obey the law of your God and the law of the king be punished with dispatch, whether by death, corporal punishment, confiscation of possessions, or imprisonment.” 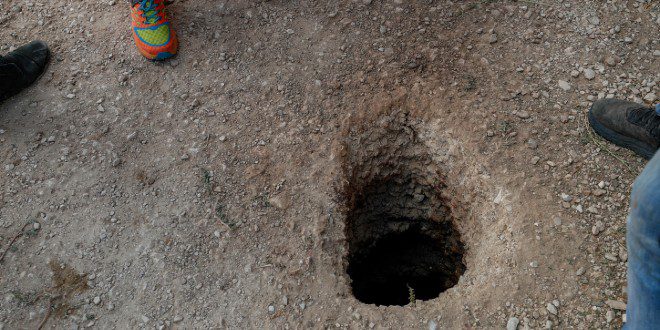 The six prisoners shared a cell, digging the tunnel with a rusty spoon that they kept hidden behind a poster. The process took one month.  Arik Yaacov, the service’s northern commander, said the escapees appeared to have opened an hole from their cell toilet floor to access passages formed by the prison’s construction.

These are the 6 prisoners who escaped via the tunnel they dug. It’s prison break terror style. The prisoners likely got to Jenin or other locations in the West Bank by now. pic.twitter.com/XfWcgawVec

The prisoners escaped at 3:30 AM and were seen running across a field by a farmer who notified the police.

Police, the Shin Bet (Israel Security Agency), IDF Border Police, special forces, and troops from two IDF companies are taking part in the massive manhunt, and have placed roadblocks in the West Bank. Security forces are also utilizing special units in the search like dogs and aerial support. Roadblocks have been set up in Judea and Samaria.

“There is no reason to change your routines, but there will be large numbers of troops within the cities of Afula and Beit Shean and in other towns. I do request additional awareness of anything suspicious,” Northern District chief Shimon Ben Shabo said in a statement.

Police are investigating the possibility that the escaped prisoners may have managed to escape to Jenin or Jordan.

The Israel Prison Service released the names and affiliations of the escaped prisoners:

Five of the high-security prisoners were serving life sentences in connection with deadly terror attacks against Israelis. All six were considered highly dangerous. According to Hebrew media reports, three of them had attempted to escape in the past.

Prime Minister Naftali Bennett spoke with Interior Minister Omer Bar-Lev and said that this was a “serious incident that will require the efforts of all security services.” A senior police official said that this is one of the worst incidents of this kind in the country.

MK Itamar Ben-Gvir (Religious Zionist Party), chairman of the Otzma Yehudit faction, blasted government policies regarding the ‘lenient prison conditions’ for jailed terrorists, which he said were to blame for the escape.

“The lenient prison conditions for terrorists and the giving in to their demands for fear of an escalation, were taken advantage of [by the terrorists] for their escape. Public Security

The Israel Prisons Service released a statement saying it would be sending the other security prisoners at Gilboa Prison to other facilities across the country as a precautionary measure in case there are other tunnels.