Catholic media tries to distance Pope from role in Holocaust

You whose eyes are too pure to look upon evil, Who cannot countenance wrongdoing, Why do You countenance treachery, And stand by idle While the one in the wrong devours The one in the right? 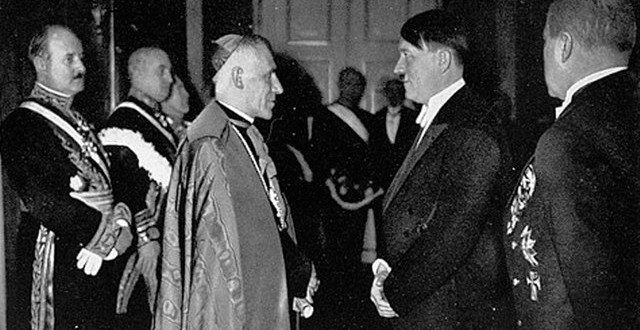 Due to the Vatican’s silence during the Holocaust, Pope Pius XII has been dubbed ‘Hitler’s Pope. A new attempt by Catholic media to rewrite history falls short, serving rather to highlight that the Pontiff knew all about the Nazi death camps and did far too little to minimize the genocide carried out against the Jewish People.

Catholic media claims the Pope worked to save Italy’s Jews

The pro-Israel blogger Elder of Ziyon posted about recent articles in the Catholic media which are trying to portray the role of Pope Pius XII in the Holocaust in a positive light. EOZ cited an article in The Catholic News Agency published last week titled, “Expert’s latest investigation dispels myths about Pius XII and Rome’s Jews.” The article cited the conclusions of a series of investigations on archive material carried out by Deacon Dominiek Oversteyns, of the Spiritual Family “The Work” who studied public archives documenting the fate of the Jews in Italy during the Holocaust.

Out of these, 1,323 — or 16% — found refuge prior to the raid. Eighteen went to the Vatican extraterritorial properties, 393 to villages in the mountains around Rome, 368 to the private homes of friends, 500 to 49 different Roman convents, and 44 to parishes and pontifical colleges in Rome, Oversteyns reported.

Pius XII was also able to help 152 Jews hidden in private homes under the protection of DELASEM, the Delegation for the Assistance of Jewish Emigrants. In all, Pius XII gave support to some 714 Jews.

Eight different testimonies reveal how Pius XII asked at least 49 convents to hide and house Jews, and declared those convents to be extraterritorial areas under the authority of the Vatican, Oversteyns found.

Despite the beneficient light Oversteyns’ study attempts to shed on the Pope, it goes on to document that the deportation of Jews from Italy increased just a few short months after these efforts by the Pope.

Ongoing controversy: Vatican did not speak out

The controversy surrounding Pope PiusXII and his actions (or inactions) during the Holocaust has been boiling since the end of World War II. Born Eugenio Maria Giuseppe Giovanni Pacelli, Pope Pius XII was head of the Catholic Church and sovereign of the Vatican City State from 2 March 1939 to 1958 when he died. Before his coronation, Cardinal Pacelli, like his predecessor Pope Pius XI, was a vocal and active critic of the Nazi party. As Vatican Secretary of State, Cardinal Pacelli, made some 55 protests against Nazi policies, including its “ideology of race” and helped author a critique of Nazi ideology in response to the Nuremberg laws. In 1938, Cardinal Pacelli publicly restated the words of Pius XI on the incompatibility of Christianity and antisemitism: “It is impossible for a Christian to take part in anti-Semitism. Anti-Semitism is inadmissible; spiritually we are all Semites.”  Asa result, the Nazi regime disapproved of Pacelli’s election as Pope.

At the same time, Cardinal Pacelli made official anti-Semitic statements, referring to Jews as those “whose lips curse [Jesus] and whose hearts reject him even today.” His predecessor, Pope Pius XI, was made aware of Kristallnacht, nation-wide anti-Jewish violence in Germany in November 1938, but Pacelli, the Cardinal Secretary of State at the time, persuaded him to refrain from condemning it. In 2005, Corriere della Sera published a document dated 20 November 1946 showing that the pope himself had ordered that orphaned Jewish children in war-time France be baptized and kept in Catholic custody rather than turn the children over to Jewish organizations.

But after his coronation in 1939 during the outset of the war and after the Nazis had already risen to power, Pope Pius XII fell strangely silent. As the head of Catholics all around the world, the official policy of the Vatican was to remain neutral during World War II. In October 1941, the Assistant Chief of the U.S. delegation to the Vatican, Harold Tittman, asked the Pope to condemn the atrocities. The response came that the Holy See wanted to remain “neutral,” and that condemning the atrocities would have a negative influence on Catholics in German-held lands.

As the security of the Jewish population became more precarious, Pius XII did intervene in March 1939 to obtain 3,000 visas for European Jews who had been baptized and converted to Catholicism to enter Brazil. Two-thirds of these were later revoked, however, because of “improper conduct,” probably meaning that the Jews started practicing Judaism once in Brazil. At that time, the pope did nothing to save practicing Jews

Throughout the Holocaust, Pius XII was consistently besieged with pleas for help on behalf of the Jews, most notably from the Chief Rabbi of Palestine, Isaac Herzog, who petitioned the Vatican several times throughout the Holocaust. In January 1943, Pius XII declined to denounce publicly the Nazi discrimination against the Jews, following requests to do so from the president of the Polish government-in-exile, and Bishop Konrad von Preysing of Berlin. John Cornwell argues in his book, Hitler’s Pope, that the pope was weak and vacillating in his approach to Nazism. Cornwell asserts that the pope did little to challenge the progressing holocaust of the Jews out of fear of provoking the Nazis into invading Vatican City.

After the war, the pope advocated peace and reconciliation, including lenient policies towards former Axis nations.

This is not the first attempt to exonerate the Pope who has been identified with the Holocaust. 40 years ago, the Vatican published 11 volumes of selected archival documents to prove his innocence, claiming he used quiet diplomacy and encouraged convents and other religious institutes to hide Jews.

Perhaps the most damning revelation came last year when a group of German researchers studied the Vatican documents concerning Pope Pius and the Holocaust. The study revealed that one memo was conspicuously absent. The memo revealed that the pope knew from his own sources about the Nazi death camps and Hitler’s attempts to exterminate the Jews but the pope chose not to reveal this to his contacts with the U.S. government. The decision to withhold this information came at the behest of Secretariat of State’s Angelo Dell’Acqua, who became a cardinal, who wrote a memo warning Pius to distrust the report because Jews “easily exaggerate” and “Orientals” — meaning Archbishop Sheptytsky who also reported witnessing the exterminations— “are really not an example of honesty.”

“This is a key document that has been kept hidden from us because it is clearly anti-Semitic and shows why Pius XII did not speak out against the Holocaust,” the researchers concluded.

EOZ: Pope could have saved Jews

EOZ concluded his blog post with a statement condemning Pope Pius that is so clear as to be irrefutable:

While Pius may have helped Catholics save a small percentage of Rome’s Jews, he was not a local Rome official – he was the leader of some 200 million European Catholics. His words could have encouraged them to save and rescue hundreds of thousands of doomed Jews. His main crime was one of omission and no amount of research showing that he indirectly saved a few hundred local Jews can possibly take away his execrable record of refusing to use his significant moral weight to condemn Nazi Germany and instruct his followers to save every Jew they could.

The White House met with Jewish leaders to discuss antisemitism. Now what?

Holocaust survivor who translated during Eichmann trial dies at 94

For the first time ever: Church of England finds vicar guilty on charges of antisemitism