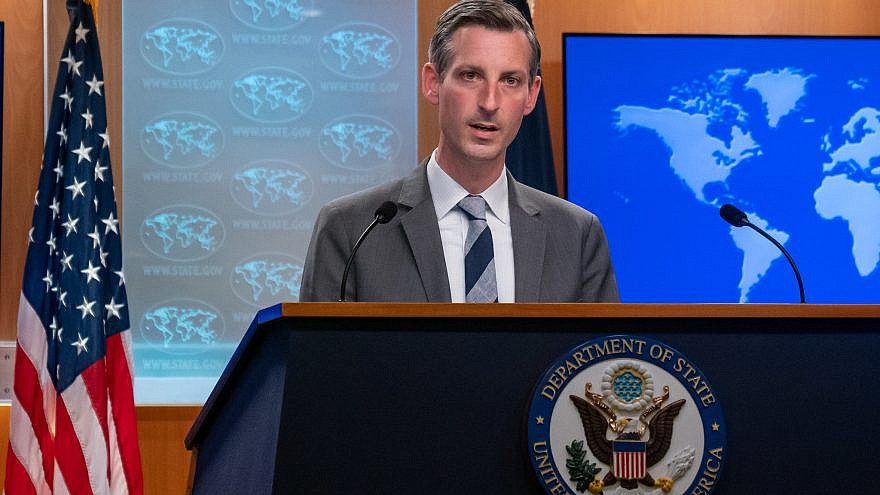 A journalist at a State Department press briefing last Wednesday challenged spokesman Ned Price with several questions about the Middle East. The briefing opened with questions about the recent Iranian drone attack targeting the Liberian-flagged oil tanker Mercer Street in the Arabian Sea.  A Romanian national and a British national were killed in the attack. Price responded that the State Department was preparing an unspecified “diplomatic response” in coordination with allies that would “protect maritime security and freedom of navigation against those threats posed by Iran.”

The journalist then noted that the catastrophic explosion in Beirut Harbor took place one year ago and there has yet to be any accountability for the responsible parties. The explosion caused at least 218 deaths, 7,500 injuries, and $15 billion in property damage, and left an estimated 300,000 people homeless. The blast was caused by 2,750 tons of ammonium nitrate belonging to Hezbollah improperly stored in a portside warehouse. Without addressing the issue of guilt or naming Hezbollah, Price stated that the US is providing nearly $100 million in additional humanitarian assistance for Lebanon in addition to  $560 million in humanitarian aid that the United States has provided to the Lebanese people over the past two years. Price did not go into detail regarding which organizations would receive the aid. It should be noted that Hezbollah is part of the Lebanese government, representing fully one-third of the parliament.

Price was then asked if the State Department had any response to the recent spate of rockets fired at Israel from Lebanon.

“Do you not see at all a pattern here, meaning in Lebanon, in the Gulf, in Afghanistan, where you guys are offering money, negotiations, the prospect of sanctions relief, and the response to that is more aggression?” the journalist asked. “Do you see any pattern at all in this?”

“We’ve talked about this broader context. We talked about it yesterday. But if you’re suggesting a connection between our humanitarian leadership and these attacks, that is not one that we see.”

The reporter then asked about a report of $20 billion that was withdrawn from the Lebanese banks and deposited in European banks in a manner that precluded its use for humanitarian purposes benefitting the Lebanese people. Price responded that he was “not in a position to respond.”

In June, the  State Department admitted that funds allocated for humanitarian aid could be used for terrorism against Israel.

Additionally, the General Accounting Office, a US government watchdog agency,  issued a report in March showing that USAID did not fully comply with vetting procedures for primary recipients in the years 2015-2019 and that some of the funding may have reached terrorist organizations.