The heart of the righteous man rehearses his answer, But the mouth of the wicked blurts out evil things. 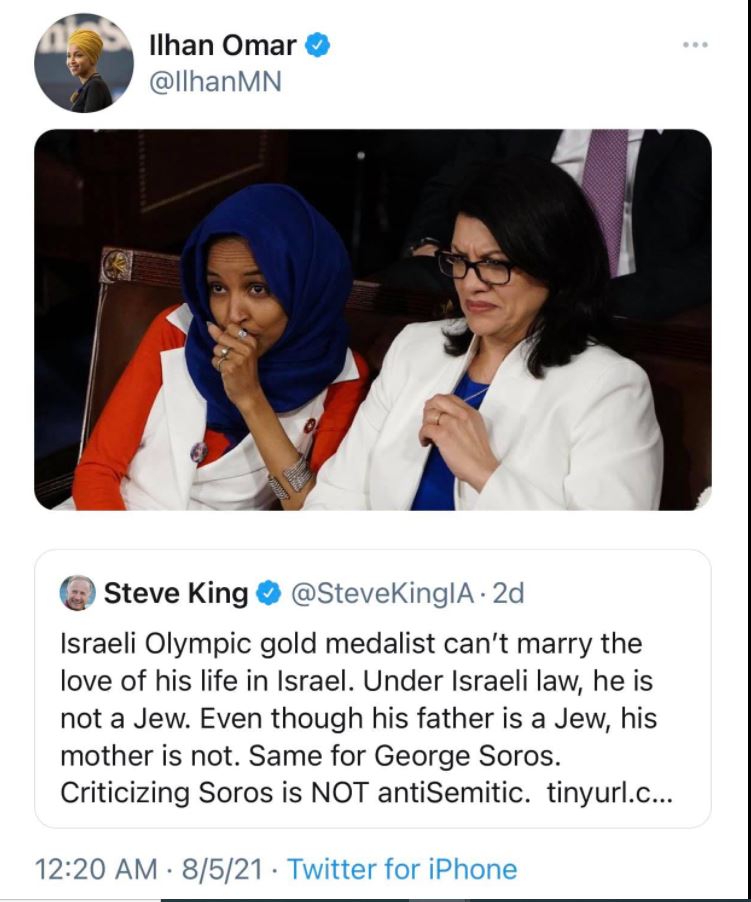 On Friday, notoriously anti-Semitic Rep. Ilhan Omar found common ground with white supremacists when she retweeted a post from Steve King, the Iowa Congressman who was criticized for espousing white supremacist ideas.

On Monday, King tweeted criticism of Israel that is favored by white supremacists as ‘proof’ that Israel is racist.

Israeli Olympic gold medalist can’t marry the love of his life in Israel. Under Israeli law, he is not a Jew. Even though his father is a Jew, his mother is not. Same for George Soros. Criticizing Soros is NOT antiSemitic. https://t.co/2cqNV6LUKH

The tweet referred to the fact that according to Jewish law, Israel’s Olympic gold medalist, Artem Dolgopyat, is not Jewish. His father is Jewish but his mother is not. Israel does not allow for civil marriages and marriage certificates are granted by religious authorities. Dolgopyat, who has lived with his girlfriend for three years. would need to travel abroad to have a civil marriage, which would be recognized by the state. The tweet inaccurately claims that the mother of billionaire George Soros was not Jewish.

After a negative reaction, Omar removed the tweet. But Stop Antisemitism Org. retained a screenshot:

“Ilhan Omar retweets white supremacist supporter Steve King, Iowa congressman who was kicked off his committee assignments over his vile racism,” Stop Antisemitism added. “When it comes to bashing Jews, Ilhan is ALL about bi-partisanship! Update: she deleted the tweet, however, screenshots are forever. Truly sickening the levels this woman will stoop to in order to vilify Jews.”

Omar attempted to brush off criticism by claiming her reposting of the white supremacist/anti-Semitic tweet was an attempt at humor that the internet un-savvy were too obtuse to understand.

Lesson of the day: When mocking people like Steve King, don’t use a meme. Twitter humor isn’t for everyone.

Omar’s claim that her retweet was critical of King would be more credible were it not for her long history of anti-Israel and anti-Semitic comments. Soon after she was elected, she channeled an anti-Semitic trope of Jewish global domination when she claimed that Jewish money was dominating US politics via the pro-Israel lobby.

“I want to talk about the political influence in this country that says it is okay to push for allegiance to a foreign country,” Omar said as part of a discussion about past anti-Semitism allegations.

She deflected criticism claiming it was “Islamophobic” and she was the victim of racism and sexism.

In June, Omar compared Israel and the US to the Taliban and Hamas.

In 2019, Stop Antisemitism voted Omar “Antisemite of the Year”.