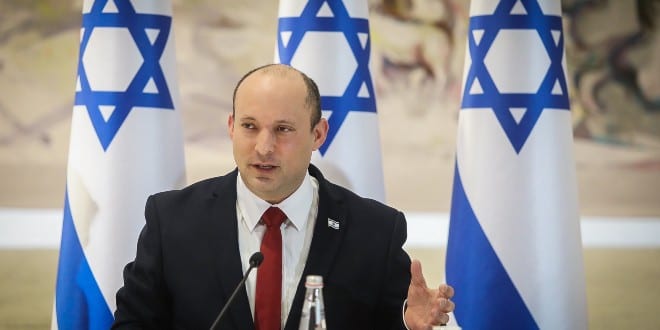 On Friday, Israeli Prime Minister Naftali Bennett kicked off a government campaign for the third round of booster vaccines for the elderly. “We are initiating a vaccine operation to protect the elderly of Israel. From this day, there is a new mitzvah (Torah commandment); ‘Vaccinate your father and mother so that their days will be lengthened.”

Honor thy father and mother

“Honour thy father and thy mother in order that your days may be lengthened” (Hebrew: כַּבֵּד אֶת אָבִיךָ וְאֶת אִמֶּךָ לְמַעַן יַאֲרִכוּן יָמֶיךָ) is repeated eight times throughout the bible, mosty notably as the fith of the Ten Commandments listed in Exodus 20:1–21, and in Deuteronomy 5:1–23.

“Findings show that there is a decline in the body’s immunity over time. The aim of the supplementary dose is to build it up again, and thus reduce the chances of infection and serious illness significantly,” Bennett said.

The launch for people over the age of 60 was held at  Chaim Sheba Medical Center outside Tel Aviv with President Isaac Herzog in attendance. Those over 60 who were vaccinated over five months ago will be eligible and more than 40,000 senior citizens have reportedly signed up for the third dose of the vaccine.

Israel has hosted one of the most aggressive vaccination programs in the world,  with 57 percent of its 9.3 million people fully vaccinated. 63 percent have had at least one dose of the Pfizer-BioNTech vaccine, which uses mRNA technology. More than 90 % of people over the age of 60 have received two doses of the vaccine. Among those over 40, the vaccination is reportedly 80% effective.

But this has not prevented a spike in new cases, primarily of the Delta Variant, with the number of cases per day exceeding 2,000. There are currently 200 serious cases, the highest since April 14. 6,466 Israelis have died from the virus since the start of the pandemic.

New Health Ministry statistics indicated that, on average, the Pfizer shot is now just 39% effective against infection, while being only 41% effective in preventing symptomatic COVID.

Israel recently disposed of 80,000 doses of vaccine that had passed their expiration date with a value of six million NIS.