A New Flavor for Ben & Jerry’s, Courtesy of the Jewish Left

Home » A New Flavor for Ben & Jerry’s, Courtesy of the Jewish Left 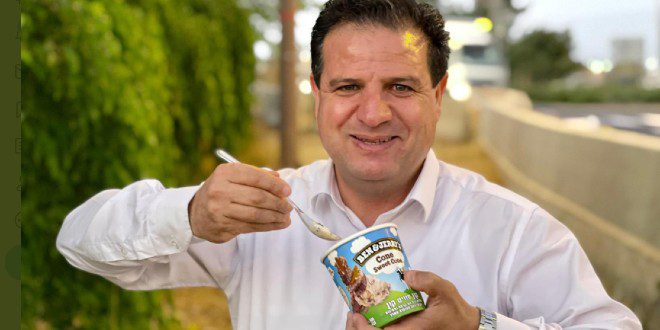 If the leaders of J Street, the controversial Jewish pressure group that was created to lobby for a Palestinian state, and the New Israel Fund, its longtime ally, were in charge of creating new flavors for Ben & Jerry’s ice cream, their newest would be Red Herring. Or maybe Fig Leaf.

Such flavors don’t sound too appetizing? Well, those groups’ responses to the Ben & Jerry’s controversy are equally unattractive from the point of view of intellectual integrity.

J Street president Jeremy Ben-Ami and New Israel Fund CEO Daniel Sokatch have emerged as the most vocal defenders of the decision by Ben & Jerry’s to refrain from selling its ice cream in what it calls “Occupied Palestinian Territory.”

That’s a classic example of an argument which sounds reasonable at first glance, but crumbles as soon as you think about it a bit deeper.

The entire city of Jerusalem, after all, is part of the State of Israel, to use Ben-Ami’s formula. It’s certainly “sovereign Israel,” to employ Sokatch’s language.

So does that mean that J Street and the New Israel Fund consider the post-1967 sections of the city to be part of Jerusalem, and are denouncing Ben & Jerry’s for boycotting those areas?

Does that mean J Street and the New Israel Fund are demanding that Ben & Jerry’s be made available in mixed Arab-Jewish neighborhoods in the post-1967 part of the capital, such as Shimon HaTzadik/Sheikh Jarrah or Kfar Shiloah/Silwan?

Does that mean members of J Street and the New Israel Fund are bombarding Ben & Jerry’s with letters insisting that “Chubby Hubby” and “Chunky Monkey” be sold in mostly Jewish neighborhoods in the eastern part of the city, such as Gilo, French Hill and Ramot?

Of course not. All their talk about “sovereign Israel” is nothing more than a red herring—a distraction from the real issue—or maybe a fig leaf, a cover for what they really advocate.

Because the cold, hard truth is that J Street and the New Israel Fund don’t accept the fact that the eastern parts of Jerusalem are legitimately sovereign Israeli territory. They and their colleagues on the American Jewish left believe those parts of the city should become the capital of “Palestine.” That’s the Palestinian Authority’s position, and the Jewish far left supports it.

However, Ben-Ami and Sokatch know how unpopular that position is in the Jewish world. So instead of being upfront about their positions, they have constructed disingenuous arguments about “sovereign Israel” and “occupied territory,” so it sounds as if they —and Ben & Jerry’s— are operating according to some noble principle. They’re not. They’re engaged in intellectual shenanigans.

If Ben-Ami and Sokatch really subscribed to the high-sounding principle that they have cited, they would accept the fact that all of Jerusalem–and all of the Golan Heights—are part of sovereign Israel.

But they don’t accept it. They don’t respect the concept of “sovereign Israel.” They only cite it when it’s convenient for scoring political points.

The position that J Street and the New Israel Fund have taken with regard to Ben & Jerry’s is nothing more than a red herring, or perhaps a fig leaf. Those wouldn’t make delectable flavors of ice cream. They don’t make for reasonable or honest political arguments, either.