“This is the ritual law that Hashem has commanded: Instruct B’nei Yisrael to bring you a red cow without blemish, in which there is no defect and on which no yoke has been laid. 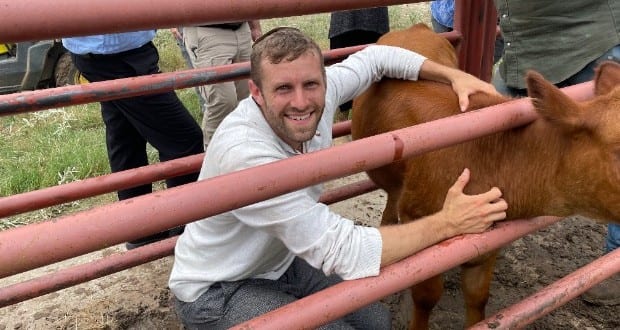 The Temple Institute’s program has yet to produce a suitable so a new possibility is being explored: educating non-Jewish cattle farmers outside of Israel in the laws necessary to identify possible candidates for a Red Heifer. Jewish sources record similar precedents for the Red Heifer being provided by non-Jews and numerology indicates that the current year is especially auspicious for the return of this Biblical commandment.

The Temple Institute launched its  Red Heifer program about a decade ago but even in Temple times, an animal that fulfilled the Biblical requirements was exceedingly rare. The Temple Institute has a breeding program in Israel and is investigating the possibility of utilizing genetic science to produce an entirely red calf.

Last month, the Temple Institute was contacted by a cattle farmer in Texas who informed them that five red calves had been born on his ranch, about two and a half hours travel from Dallas. The Temple Institute charged Rabbi Yitzhak Meir Sabo, a community rabbi in Dallas, Texas with making the initial inspection of the calves. The inspection was thorough, requiring about eight hours.

Chanan Kupietzky traveled to Texas to be part of the delegation sent to inspect the red Angus calves last Monday.

“The farmer was a very sweet man and a devout Christian,” Kupietzky told Israel365 News. “But our story was so unusual that at first, he thought it was part of a scam, that we were trying to trick him out of money or maybe steal the calves.”

Normally, calves are ear-tagged when just a few days old. Coincidentally, these five calves were not tagged, and, also coincidentally, all were female.

“Ear tags make a hole in the ear which is a type of blemish that would disqualify the calf, Kupietzy said. “The farmer explained that because of COVID, the employee who puts in the tags did not come to the farm when these five calves were born.”

The heifer, born from a natural birth, must be entirely red, with no more than two non-red hairs on its body. It must also never have been used for any labor or have been impregnated.

Four of the calves were disqualified. But the fifth had a dark area of hair near its mouth that was unclear whether it would disqualify it for the service.

To be suitable for the ceremony,  the heifer must be two years and one day old. Sometimes, a calf that is perfectly red when it is young develops black or white hairs as it grows older, or it may develop a blemish. Sometimes, the colored hairs fall out or disappear. The Temple Institute decided to reinspect the calf at a later date.

The year of the Red Heifer

“I really believe that the red heifer was born this year,” Kupietzy said. He explained that the current Hebrew year is 5781 which, in Hebrew numerology, is תשפא. “That is an acronym for תהיה שנה פרה אדומה (it will be the year of the red heifer).”

Kupietzky explained that as part of the ongoing effort to find a red heifer, he is working with Boneh Israel (build Israel), a Christian organization, to educate non-Jews to identify possible candidates. Kupietzky explained that the Talmud has a precedent for the red heifer being provided by a non-Jew. The Talmud (Kiddushin 31a) tells the story of the non-Jew named Dama who would not wake his father, Netina, to get to the key under his pillow to retrieve the stones to sell for the breastplate of the High Priest at a price of 600,000 dinars. Dama forfeited this great sum simply so as not to disturb his father’s sleep. He was rewarded the following year by finding in his flock and selling a rare red heifer to the rabbis for the same sum.

“The red heifer is not a korban, a sacrifice,” Kupietzky pointed out. “It is performed outside of the Temple and is considered a tekes, a ceremony. Which is why we are especially looking in Texas for the tekes,” he quipped.

The existence of such a heifer is considered a biological anomaly and very rare. Fortunately, the ritual requires an infinitesimally small quantity of ashes. From the time of Moses, who personally prepared the first heifer, until the destruction of the Temple, only nine red heifers were prepared. Nonetheless, this was sufficient to maintain the ritual purity of the entire nation for almost 2,000 years.

According to Jewish tradition, there will only be ten red heifers in human history with the tenth heifer ushering in the Messianic era. Rabbi Moshe ben Maimon (Maimonides), the most renowned medieval Jewish scholar known by the acronym Rambam, wrote in his explanation of the mitzvah that “the tenth red heifer will be accomplished by the king, the Messiah; may he be revealed speedily, Amen, May it be God’s will.”