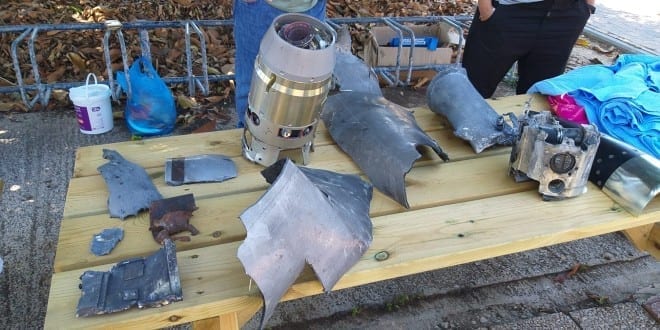 The Israel365 News editorial staff paid a visit to Kibbutz Karmia to participate in the dedication of a bomb shelter donated by our generous community. The event highlighted the truly remarkable relationship growing between Jews and Christians, an unprecedented sign that the world is changing in ways that are making prophecy appear.

At the same time, the trip raised some deeply disturbing points. A picnic table was covered with fragments of rockets; a heavy metal tube from a crude Hamas rocket, mostly intact, and light metal, plastic and high-tech components of the Iron Dome missiles that brought it down. ‘Thank God for the Iron Dome,’ was the consensus. The entire kibbutz was littered with shrapnel, Hamas metal intermingled with IDF steel. The residents described the three-phased terror that appeared over their heads thousands of times from the Hamas attacks. The first terror came in the wake of the sirens as rockets from Gaza flew at them. Intent on fulfilling their charter and wiping out the entire Jewish nation, Hamas targeted every Israeli city within range. But being in the south, located on the border with Gaza, every single rocket passed over the kibbutz. The second terror came as the Iron Dome missiles rose to counter the Hamas rockets. As they already said, thank God for the Iron Dome but it is, after all, yet another missile flying overhead that can only save lives by exploding. Its metal pieces must fall to earth and can wound those it intended to protect. The final terror comes as IDF planes and tanks respond to the attack, a necessary part of deterring the enemies of Israel.

As grateful representatives of the kibbutz spoke, children could be heard playing in the background. I suddenly realized that 70 yards from the new bomb shelter were a children’s house.

Sagit Karmiyah described her volunteer work helping the residents recover, emotionally, spiritually, and psychologically, from the trauma. She explained that shell shock was a physical reaction and emotional scars remained long after the all-clear signal was given. Though an attack may justify a report of no casualties, emotional scars and debilitating PTSD never make the news. And the most affected are, of course, the younger souls.

As the security experts spoke, it became clear that all of their efforts were spent in defending the civilians. Even the IDF strikes were curtailed, tightly focused on doubly verified terrorist targets with civilians warned in advance. The IDF was fighting a war without even a pretense of surprise, the most effective weapon in any arsenal.

As the security experts spoke, it became clear that the IDF had no intention of winning the war by conquering the enemy. The bulk of the IDF’s efforts in the last confrontation was spent on the Iron Dome anti-missile system. As a result, over 90% of the over 4,600 rockets from Gaza were intercepted. But the Iron Dome system is entirely defensive and it did not prevent a single launch before it took place. Precise drone and air strikes had some effect but not a single IDF boot touched Gazan soil. A ground incursion would have been the only way to eradicate Hamas’ ability to attack Israel but the IDF took more care not to harm Gazans than Hamas did.

So as the kibbutzniks described their fear for their children, they would not allow themselves to hint at the troubling truth. They loved their children and would do anything to protect them. Except for the one thing that was in Israel’s power to do but what no Israeli is willing to call for; treating our enemies as enemies. Because that would mean harming the civilians of Gaza.

We would do anything to save our people except that.

It is undoubtedly true that Israel is the bastion of the Jewish people, a defending angel that could have prevented the Holocaust and any of the countless historic tragedies and tribulations that targeted the Jews throughout the millennia. Thank God one thousand times that despite being surrounded by enemies, Israel has, through necessity, become strong and has defended itself against countless threats. But when faced with a vastly inferior enemy which the IDF could readily defeat in a direct confrontation, Israel is consistently declared the loser.

But even when faced with an enemy that is so dedicated to its stated goal of killing Jews that it is willing to rain missiles down on its own people, Israelis will not call for the death of civilians. That would be too high a price to pay. Doing that would be to lose the war.