And the earth opened her mouth and swallowed them up, and their households, and all the men that appertained unto Korach, and all their goods. 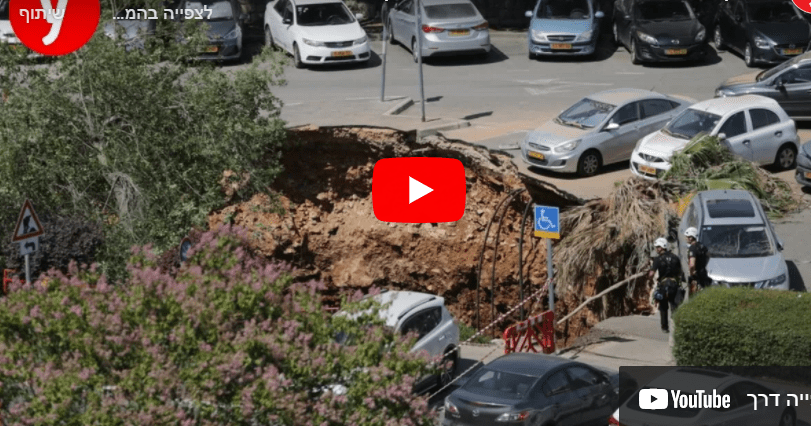 A large sinkhole appeared in Jerusalem on Monday, recreating the Biblical punishment of Korach.

One rabbi warned that this was a reminder that the universalism manifested in democracy is anti-God and this is embodied in the destructive coalition recently formed by Naftali Bennett.

A large sinkhole suddenly opened up on Monday afternoon in a parking lot adjacent to Shaarei Tzedek (the gates of mercy) Hospital in Jerusalem. Several cars were swallowed up, falling into the sinkhole. Emergency services were called to the site and after a search, it was determined that the cars were empty when they fell into the hole.

According to reports, the collapse was the result of nearby construction work which included a tunnel running under the site. The tunnel showed signs of partial collapse.

It is interesting to note that this week, Jews around the world are reading the section of the Torah describing the rebellion of Korach and the ensuing divine retribution.

And the earth opened her mouth and swallowed them up, and their households, and all the men that appertained unto Korach, and all their goods. Numbers 16:32

Rabbi Shmuel Eliyahu, the chief rabbi of Tzfat, gave a video lesson on the Parsha of Korach ..Though the rabbi did not connect the Biblical rebellion to current events, some Israelis who were disturbed about Naftali Bennett, head of the New Right party, forming a coalition with left-wing Yesh Atid headed by Yair Lapid and the United Arab List headed by Mansour Abbas took comfort in the rabbi’s lesson.

“Korach pursued the leadership of Israel even though he was not suited to it,” Rabbi Eliyahu began. The rabbi then quoted the Zohar’s explanation of Korach’s aspirations which stated, “Anyone who pursues something that is not for him will lose it in the end. And even what he has, he will lose.”

The rabbi explained Korach’s fatal error as it appeared in the Zohar.

“Everyone who calls left right and right left, who mixes things up, it is as if he destroys the world,” the rabbi quoted, going on to explain. “Everything was created with a purpose. The left serves its purpose and the right has its purpose.”

The rabbi quoted a verse from Isaiah to illustrate this point:

For you shall spread out to the right and the left; Your offspring shall dispossess nations And shall people the desolate towns. Isaiah 54:3

When everything serves its purpose as God intended, the world flourishes,” Rabbi Eliyahu noted. “And the opposite is also true. Whoever disturbs this balance, destroys the balance and confuses people. The world is built like a body with each part different in order to serve a different purpose. Together, it all serves a greater purpose.”

As noted above, the rabbi did not ascribe any political message to the lesson however it can certainly be applied to the current coalition efforts in Israel.

Rabbi Yosef Dayan, a member of the nascent Sanhedrin who can trace his lineage back to King David, saw dire significance in the sudden appearance of the sinkhole.

“The Torah is written in a specific order,” Rabbi Dayan explained. “Last week, we read about the spies who rejected Israel. The spies were a classic example of democracy in action. Ten spies, the majority, made their claim and convinced a majority of people. They all agreed to reject God’s command to enter the land.”

“This led to Korach who made the same claim, that everyone was equal and could overrule the word of God. But Korach’s message was really, ‘everyone is equal…but I am the most equal of all.’”

“That is precisely what Naftali Bennett did,” Rabbi Dayan said. “All of the people who voted for him wanted a right-wing government. Everyone’s vote is equal but Bennett’s desire to rule is more important than the people who voted for him. We can see this parallel in Bennett’s move to prevent Netanyahu from even sitting in the Knesset. This is precisely like Korach’s attempt to usurp Moses and Aaron.”

“Just as the Parsha of the spies precedes the Parsha of Korach, we are now seeing the ground open up right after we relived the sin of the spies,” Rabbi Dayan said. “The spies convinced the nation to reject the land of Israel by claiming they could not beat their enemies.”

We saw the Nephilim there—the Anakites are part of the Nephilim—and we looked like grasshoppers to ourselves, and so we must have looked to them.” Numbers 13:33

“This is precisely what just happened in the war against Hamas,” Rabbi Dayan said. “Israel saw itself as ‘grasshoppers’ against Hamas. It is remarkable that we are now on the anniversary of the Six-Day War when we actually were like grasshoppers when compared to our enemies but we overran them in less than one week. But now that we are so much stronger than our enemies, we run away and act scared. The reminder is clear.”

“The two sections of the Torah, Korach and the spies, are connected,” Rabbi Dayan explained. “The spies lied and said that the land of Israel swallowed up its inhabitants.”

Thus they spread calumnies among the Israelites about the land they had scouted, saying, “The country that we traversed and scouted is one that devours its settlers. All the people that we saw in it are men of great size; Numbers 13:32

“The message is that if we choose to reject the land of Israel that God commanded us to inherit, if we see ourselves as grasshoppers before the enemies of Israel, then we will continue to follow a crooked path or corrupt democracy and the ground will eventually swallow us up, no matter where we are.”

Rabbi Dayan emphasized that according to the classical Jewish commentaries, Korach was an incredibly righteous man who never sinned until he rebelled against Moses and Aaron. His claim that all the Jews were equal was a valid claim, but it was made at the wrong time and was an ego-based, untimely power grab.

“His claim was that we were all the same,” Rabbi Dayan explained. “Just as Bennett wants us to believe that left-wing, right-wing, religious and secular, Arab and Jew, all are the same. On one level, this is true. The commentaries explain that Korach’s universalist-egalitarian vision would appear in the post-messianic era. For this reason, Korach and his followers were not killed but were swallowed up by the earth and will reemerge in the days preceding the Messiah.”

Korach to reappear before Messiah

A Midrash related by the Talmudic commentary called Tosafot (Kiddushin 31B) describes how Korach’s punishment is connected to the appearance of the Third Temple. The Tosafot asks why Psalm 82 is described as a  ‘Mizmor’, a joyous song,  when it’s the subject matter is the tragedies accompany the destruction of the Temple.  The Tosafot explains that Asaf, a descendant of Korach, saw the salvation of his ancestor in the destruction of the Temple and Israel.

This is compared to a maidservant who went to draw water from the well and whose pitcher fell into the well. She became distraught and began to cry – until the king’s maidservant came to draw water carrying a golden pitcher, and it too fell into the well. At which point the first maidservant began to sing. ‘Till now’ she exclaimed, I didn’t think that anybody would retrieve my cheap earthenware pitcher from the well. But now, whoever retrieves the golden pitcher, will retrieve mine as well!’ In the same way, when the sons of Korach, who were swallowed up inside the earth, saw how the gates of the Temple sunk into the ground, proclaimed ‘Whoever rescues the gates will also rescue us!’ That explains why Asaf, who was from the family of Korach, said ‘Mizmor.’