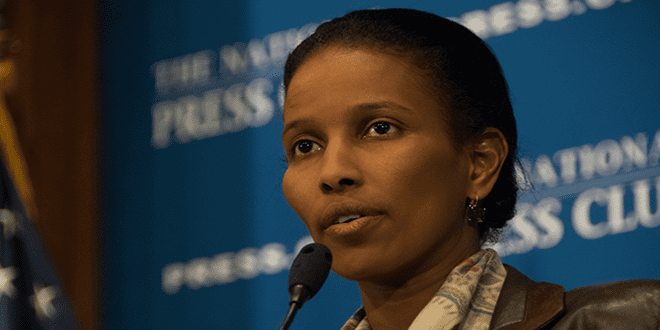 Work changed for most people during the COVID-19 pandemic. For writers and thinkers, including best-selling author Ayaan Hirsi Ali, the question was clear: How does someone who relies on public speaking to get her message out when public events pose a health risk?

The answer, in part, is the Ayaan Hirsi Ali podcast, launched earlier this year.

Hirsi Ali is a Somali native who fled a forced marriage to a cousin, became a member of the Dutch Parliament, and has faced death threats from Islamist terrorists who see her as a blasphemer and apostate.

“He said, ‘it’s a guilty secret,'” Hirsi Ali told the Investigative Project on Terrorism. “And I agree with him totally. I get to read the works of other people. And then I choose the conversation I want to have and whom I want to have it with. And that’s what I share with my audience.”

Hirsi Ali’s remarkable life is an open book. She chronicled the beatings and female genital mutilation she suffered growing up in a conservative African Muslim family, and her eventual decision to leave the faith, in Infidel. She followed that with Nomad, which builds on her upbringing, her path to Europe and, ultimately, the United States.

She also has examined the need for a reformation in Islam in Heretic, and her new book, Prey: Immigration, Islam, and the Erosion of Women’s Rights, tackles the difficult conversation about physical and cultural threats to Western women brought by young Muslim male migrants.

Thus far, podcast episodes have focused on issues ranging from immigration and integration, to climate change, to honor violence. But it is the threat to free speech that seems to dominate her thinking. She described “very healthy conversations” she used to enjoy with scholars at more liberal think tanks when she worked at the American Enterprise Institute in Washington.

“Everything was on the table,” Hirsi Ali said. “It’s not like that anymore.”

Today, people seem to speak in slogans, and feelings have replaced facts and data. Those who dare to disagree, or who say something provocative, can face a mob of self-righteous activists seeking to punish the offender.

It is “not the center-left liberals, but the Woke liberals,” she said. “Honestly, these people are not liberal in any way. They demonstrate that they’re illiberal. They want you to be either a member of their tribe and agree with them, do as they say, promote the tribal interest, or look outside and look at the others and only feel hostile to them.

“I know that from my clan life. I come from Somalia. that’s exactly how all our civil wars were. Just that attitude. The other clan is not just the other clan. They are not fellow human beings. They are enemies to be destroyed.”

She previously saw this closing of the minds while living in the Netherlands. Western civilization was bashed as inherently racist, colonialist and destructive. So if immigrants came into the country and brought some dangerous ideas about the treatment of women, some people would argue not to judge or intervene.

Criticizing, or just calling attention to the way Islam treats women or gay people, was considered out of bounds.

“I remember thinking, ‘this is madness, and obviously at some point it is going to stop,'” Hirsi Ali said. “It didn’t stop. It got worse and worse. The Islamists became successful in their endeavors to shut down the voices of people like me. We got the label ‘Islamophobes.’ And anybody who even posed the slightest question would just get this stamped on them.”

She sees “Wokeism” as the American iteration of this attitude.

When an Iraqi immigrant ran over and killed his daughter outside Phoenix in 2009 because, in his mind, her Westernized lifestyle brought dishonor to the family, it failed to spark much debate about honor violence or the culture that fosters the very idea that dishonor should be met with violence. Such violence, even when it’s short of murder, often includes help from several members of the family.

But as she discussed with Detective Chris Boughey, those who aid and abet often escape punishment. That’s what happened in the Almaleki case, when only Faleh Almaleki faced charges.

“The attitude is that ‘you can’t punch down. They’re already vulnerable. These men, they feel disenfranchised. They feel alienated.’ So we feel sorry for them,” Hirsi Ali told the IPT. “And that’s fine. But what about this guy who’s running over his daughter? He’s not letting her live her life the way she wants. If they all made their way to America and he wants to enjoy his freedom, why is he not allowing her to enjoy her freedom? Well then you get into the quagmire of cultural and value differences.”

It’s also where accusations of bigotry are used as a cudgel to silence debate.

If leaders aren’t willing to push back, “we don’t need any formalized, external religion to come and shake up the system. It’s coming from the inside. People are subscribing to it or they are afraid of it.”

“I mean, you have the center-left people, perfectly sane, compassionate people who want … good things for everyone,” Hirsi Ali said. “And then you have this, to the left of Elizabeth Warren and Bernie Sanders – even to the left of those people – really far, far left, let’s just say coming into the millennial level of things, and they’re making all of these crazy demands and getting it.”

People have lost their jobs for their views, which cannot help but have a chilling effect on speech.

Hirsi Ali was an early target.

In 2014, Brandeis University rescinded an invitation for her to speak at the commencement ceremony after students protested. She’s far from alone.

“One thing I remember scratching my head about was these presidents of universities,” she said. “They are leaders of institutions whose job is to guarantee that freedom of inquiry is cultivated and encouraged. And the people who are giving money to these institutions are doing it for that particular purpose. And so it’s these university presidents who then caved after what I thought was just a little bit of pressure.”

Often, well-intentioned ideas get hijacked. She pointed to the Black Lives Matter movement as an example.

“It starts with being polite. It starts with wanting to listen,” she said. “So if someone is preaching at you about injustice, obviously the polite response is to listen. If you then think that a group of people are organized to do something about the injustice, I think it’s a natural human response to say, ‘Okay. Here are these people and they’re doing something about it.’

Black Lives Matter did create a lot of awareness. But the organized movement – not the people carrying signs and protesting – has detailed ideas that aren’t as universally embraced.

“I just went on their website and I started to read about their goals, their vision, their tactics, and I don’t like what I see. And I don’t think it’s about black people at all. This is about acquiring money and power and in many ways, these people are really corrupt.”

But saying so out loud carries a price. “They are a bunch of charlatans and what are you going to do about it?” Wokeism says “you have to mind your own business and go about your life.”

A divided country increasingly finds itself in “information silos,” she said during her podcast with Harris. This helps to close minds and intensifies tribal animosity.

The podcast, Hirsi Ali said, is a way of “going around the silo. First of all, obviously, it’s totally voluntary. You tune in only if you want to tune in and only if you want to hear these things. And so I get liberals, conservatives. I get people who dissented, who are trying to dissent from the Woke.

“And for me, always the blasphemers are the best. The people who are immersed in the ideology or the religion or whatever, and then realize something is off and they want to get out … And so right now I’m getting liberals who are testing the waters and who think they absolutely want to do the right thing. But they are making those baby steps out of that cocoon of everybody being in the same echo chamber and believing in the same things. And then suddenly this Woke ship is sailing. It’s going adrift and people don’t want to go there.

“It makes me more optimistic.”

Reprinted with author’s permission from Investigative Project on Terrorism