My ally in whom I trusted, even he who shares my bread, has been utterly false to me. 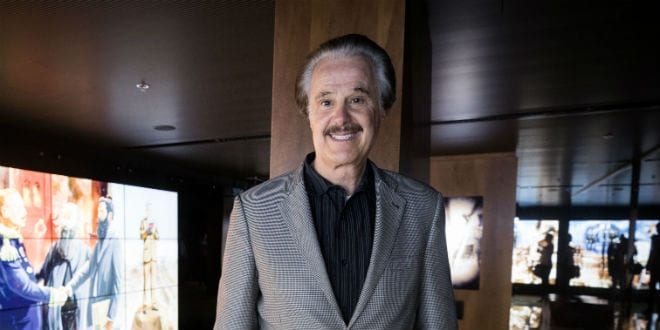 In an open letter  published by Coastal Network on Wednesday, Friends of Zion museum founder, Dr. Mike Evans referred to the newly formed Israeli government headed by Naftali Bennet as a “striptease.” Even more disturbing was his vow to “only have one mission in life left, to use every bit of my energy and power to destroy these fools before they destroy the nation.” Dr. Evans described Israel as  the nation “we evangelicals have sacrificed our lives to build.”

Naftali Bennett, the head of the New Right Party has come under fire from many right-wing voters for signing a coalition agreement with Yair Lapid, the chairman of the left-wing Yesh Atid party, and Mansour Abbas, the leader of the United Arab List. Many people on the right-wing are deeply disappointed, seeing this arrangement as a cynical power grab at the expense of the principles that garnered him support in the elections from the right-wing voters.

Dr. Mike Evans vows to “fight [Bennett] every step of the way.”

Dr. Mike Evans, an American-Christian Zionist leader and founder of the  Friends of Zion Heritage Center in Jerusalem, took his displeasure several steps further by publishing an open letter threatening to mobilize his purported 77 million followers and his influence with some 20 world leaders to “fight [Bennett] every step of the way.”

Evans doubled down in yet another open letter title “The Israeli political striptease show.”

Evans described the beginnings of his support for Israel as a connection he developed with Menachem Begin, the first right-wing prime minister of Israel who served from 1977-1983. His support for Israel culminated in strong support for former President Trump which he hinted played a pivotal role in the decision to move the US Embassy to Jerusalem.

Evans went on to describe how his work for Israel superseded his marriage.

“I told my wife when I married her that there was another woman in my life. I had to be with her a lot. Her name was Israel. She said, ‘I’ll put up with her, but if she ever calls me on the phone, you’re dead.’”

“I’ve always been thrilled and proud of this beautiful, attractive, seductive Princess Israel. But right now, I’m not. I’m horrified. I’m seeing a display that is nauseous. It’s sickening for me as a person who has devoted 50 years of my life to build support for the State of Israel.”

Evans claimed that his support of Israel was not partisan and that he had supported left-wing Shimon Peres as well as right-wing Benjamin Netanyahu, who Evans described as a “cherished friend of 41 years.” Evans claimed the Israeli political system had mobilized against Netanyahu.

“How shameful this seduction is! I can smell the ashes of Auschwitz and see the blood of a multitude of souls who gave their lives to birth the Jewish state. These fools who think they’re legends in their own minds are willing to carve up the bird to vent their spleen only on one man they despise.”

“It’s not an election to improve the lives of Israelis or the nation. It’s an election to crucify a man they hate and they’re willing to destroy the nation to do it. Rome burns and they fiddle while world leaders are laughing at these amateur nobodies. They’ll never be a member of a club that rules and runs the world. They can only be the clowns who entertain Israel’s enemies.

“If they keep up this pathetic, political striptease act, this theater of the absurd, I’ll spend the rest of my life fighting them all, mobilizing millions of evangelicals to join me in the fight. While assimilated, “accepted” Jews were busy insulting each other, drunk on the wine of pride, they did not see the smoke of Auschwitz rising because they cared to be more German than Jewish.

“Benjamin Netanyahu is a flawed man. But that flawed man delivered more peace treaties than any Prime Minister in Israel’s history, more economic prosperity, and transformed Israel into a superpower that’s the envy of the world.

Yet these would-be pretend striptease actors, with their ugliness, are delusional in believing they’re seductive, are screaming at the top of their lungs, “Crucify Him, crucify him!” It is sick and shameful to see such a group running like rabid dogs possessed with power and revenge.

Evans then described another bizarre story in which he claimed that at his first meeting with Menachem Begin in 1980, Begin challenged him, wanting to know why he came. He placated Begin by telling him that “God sent him”, an answer Begin took great pleasure in, requesting that Evans come back and tell him when God tells him why he sent him.

He finally told Netanyahu 26 years later of his role in his political career, saying, “It was God who chose you, not me. It was too holy for me to speak of.”

“This is the Benjamin Netanyahu that I know. And yes, he’s a lot like his father; both brilliant. He is the smartest living political leader on the planet. He’s also the greatest political chess player Israel has ever had. That’s what’s driving them all crazy.

“What will they do with this flawed man? This flawed man who delivered more peace treaties than any Prime Minister in history and more economic prosperity, this flawed man that transformed Israel into a superpower? Those in this striptease are drunk on power and revenge. What did Bibi do to make them so angry? It had to be horrible.

“They’re willing to carve up the bird, the soul of the nation, simply to vent their spleens on one man they despise and God who chose him to be prime minister. God knew from the beginning to the end. He knew Bibi then and Bibi now. I haven’t heard God choose any of these fools. These amateur nobodies are making a mockery of the beautiful woman I love, Israel. All the sacrifices that have been made to birth this precious nation, all the blood that’s been shed, and these fools are willing to destroy it.

Evans went on to describe himself as a martyr.

“I’ve spent 50 years of my life being ridiculed, threatened, and despised because of my stand for the nation of Israel. I’ll spend the rest of my life fighting and mobilizing millions of evangelicals to join me in the fight. Because now for the first time in my life, I see how a vastly divided nation and people can be its greatest flaw

Bibi is an imperfect man, but that flawed man was chosen by God Almighty. If you read your Bible, you’ll know they are all flawed men. One of them was King David. Why don’t we crucify him too? The city of Jerusalem was named after King David. God loved King David.

If I didn’t know better, I would think these delusional striptease politicians were on Senators Bernie Sanders’ and Elizabeth Warren’s payroll and even the mad mullahs of Tehran’s payroll who want to destroy the State of Israel. Your commander-in-chief, flawed Benjamin Netanyahu, just won a war with Gaza and did not sacrifice the lives of your soldiers. And for that you cry, “Crucify him, crucify him!”

I’m too old to be seduced by the striptease, and for ugly, pathetic, morons to parade their embarrassing selves in front of me only makes me nauseous. I still love the Lady Israel.

The only thing I’ve sacrificed my life and fortune for is the bird. I wanted that bird to be strong and healthy and fly. I am sick of seeing politicians stabbing at the bird, seeking to kill the bird, and obsessed with killing the bird.

Everything we evangelicals have sacrificed our lives to build they’re destroying. While Rome burns, they fiddle. I will only have one mission in life left, to use every bit of my energy and power to destroy these fools before they destroy the nation.

Evans has called for an “emergency meeting” to be held in the Knesset on Tuesday to discuss “actions required for the development and preservation of the important alliance between the State of Israel and the Evangelicals.”

Howard Bass, an Israeli pastor from Beer Sheva, reacted to the initial publication of the story in an article in All Israel.

“Naftali Bennett may be a man of worldly politics, but Mike Evans claims to be a man of God,” Bass said. “Yet he boasts about his following and allows filthy words to proceed out of his mouth. Neither of these honor the name of Messiah Yeshua/Jesus. Does he think that his self-righteous indignation is going to provoke Bennett to jealousy regarding the gospel?! Sounds more like an embittered Martin Luther. Shame on him!”

Rev. Johnnie Moore, the co-founder of the White House Evangelical council and president of The Congress of Christian Leaders, disagreed strongly with Evans.

“It is unwise for American Evangelicals to meddle in internal, Israeli politics beyond praising the power of Israel’s democracy and if Evangelicals do it anyhow then they should be circumspect and respectful,” Moore told All Israel. “Even though most Evangelical leaders have enjoyed a tremendous friendship with Netanyahu which will continue, their friendship with Israel transcends the machinations of Israel’s politics and its political parties.”

“Evangelicals will stand with Israel whoever is the prime minister, always,” Moore added. “We look forward to a close relationship with all future Israeli governments. As soon as this all settles, I’ll – for instance – be on a plane to Israel. Until then, I am watching and praying.”

Evans has been much embattled recently. During the Israel-Gaza conflict last month, Facebook shut down his page that had 77 million followers, making it the largest pro-Israel website. Facebook shut it down, claiming the site was “violating the rules” and for “inauthentic behavior.” Evans claimed that the real reason Facebook shut down the site because it had been targeted by a massive cyberattack by radical Islamist groups. Evans said, “over 800,000 hate comments and posts came within an hour” and that this continued over the next three days. Evans claimed that this was the basis for Facebook shutting down their account.