Right before 3 terror attacks: Abbas cabinet called on ‘Palestinians’ to fight Israel to the death

Home » Right before 3 terror attacks: Abbas cabinet called on ‘Palestinians’ to fight Israel to the death 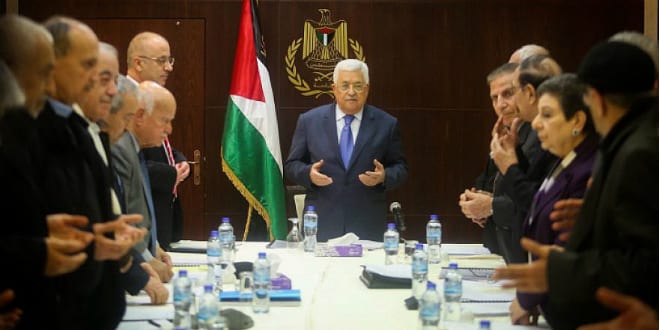 Just days before three terror attacks against Israel, a top PA religious official and advisor to PA Chairman Abbas implicitly urged Palestinians to continue “to fight” Israel – even if they get killed in the process because “this is what Islam wants!”

Palestinian Media Watch has shown that the PA has described the ongoing Arab riots in Jerusalem as being a “response” to alleged Israeli “aggressions.” Among these purported “aggressions,” the PA has listed the fact that Israel won’t allow PA elections to be held in Jerusalem. Another excuse for the violent riots is Israel’s alleged plot to destroy the Al-Aqsa Mosque, and Israel’s claimed “attack” on Jerusalem and plan to Judaize it and erase all of Arab and Christian history in it.

This weekend the terror reached a higher level. Two terror attacks with knives were foiled by the Israeli army, but on Sunday a Palestinian terrorist fired on teenagers waiting in a bus stop injuring three, two of them critically.

The terror attacks follow a lesson on Islam which official PA TV broadcast last week. Abbas’ advisor on Religious Affairs and Islamic Relations Mahmoud Al-Habbash taught viewers that if someone “attacks” them or their “homeland” or “holy sites,” Islam demands that they “fight” – even if it means getting killed – in which case the rioters will “go to Paradise,” and the attacker – i.e., Israelis – will “go to hell”: Abbas’ Advisor on Religious Affairs and Islamic Relations Mahmoud Al-Habbash: “Islam does not want you to be submissive to others, it wants you to be powerful, ruling, strong, dignified, proud of yourself, defending your territory…
[A man] said: ‘O Messenger of Allah! What if someone fights me?’ [Muhammad] said: “Fight him!” If he wants to fight you, to use weapons against you, defend yourself! Don’t be a coward! Don’t be fearful! Don’t be submissive! …  [The man] said: ‘And what if he kills me?’… You [were killed] while defending your money, while defending your home, your homeland, your family, your rights. [Muhammad would say:] ‘You’ll go to Paradise’… ‘What is your opinion if I kill him?’ … [Muhammad:] “He’ll go to hell because he is an oppressor, because he attacks.” You’ll go to Paradise because you are oppressed and because you are defending yourself. Defend yourself! This is what Islam wants of you! This is what Islam strives for you to be: Defending yourself, your homeland, your family, your people, your nation, your religion, your holy sites, your money… Everyone who fights you – you are required to fight him … You must respond to the aggression and be brave. This is what Islam wants of us.”

Al-Habbash’s call joined Fatah’s support for violent assaults against Jews and Abbas’ praise for the rioters, as Palestinian Media Watch has documented. Al-Habbash’s advocacy for violence in the name of Islam also connects to Fatah’s turning the confrontations into a religious war – a war in which Abbas’ movement announced that the rioters act as “Allah’s hand.” Early on, Fatah also recycled Abbas’ 2014 call for violence and martyrdom for the sake of Jerusalem, when he encouraged Palestinians to “defend Jerusalem with our lives.”

Fatah’s youth movement Shabiba similarly called to “escalate the popular resistance – a term used by Palestinians, which at times refers to the use of violence and terror:

“The Shabiba called on every Palestinian from among the factions, forces, and election lists to participate in the battle for the Palestinian right in Jerusalem by escalating the popular resistance (i.e., term used by Palestinians, which also refers to the use of violence and terror) in every corner and every street in Jerusalem.” Quran 2:190-191: “Fight in the way of Allah those who fight you but do not transgress. Indeed. Allah does not like transgressors. And kill them wherever you find them and expel them from wherever they have expelled you, and fitnah is worse than killing. And do not fight them at al-Masjid al-Haram until they fight you there. But if they fight you, then kill them. Such is the recompense of the disbelievers.”