Father of Meron victim meets with Druze officer who saved him 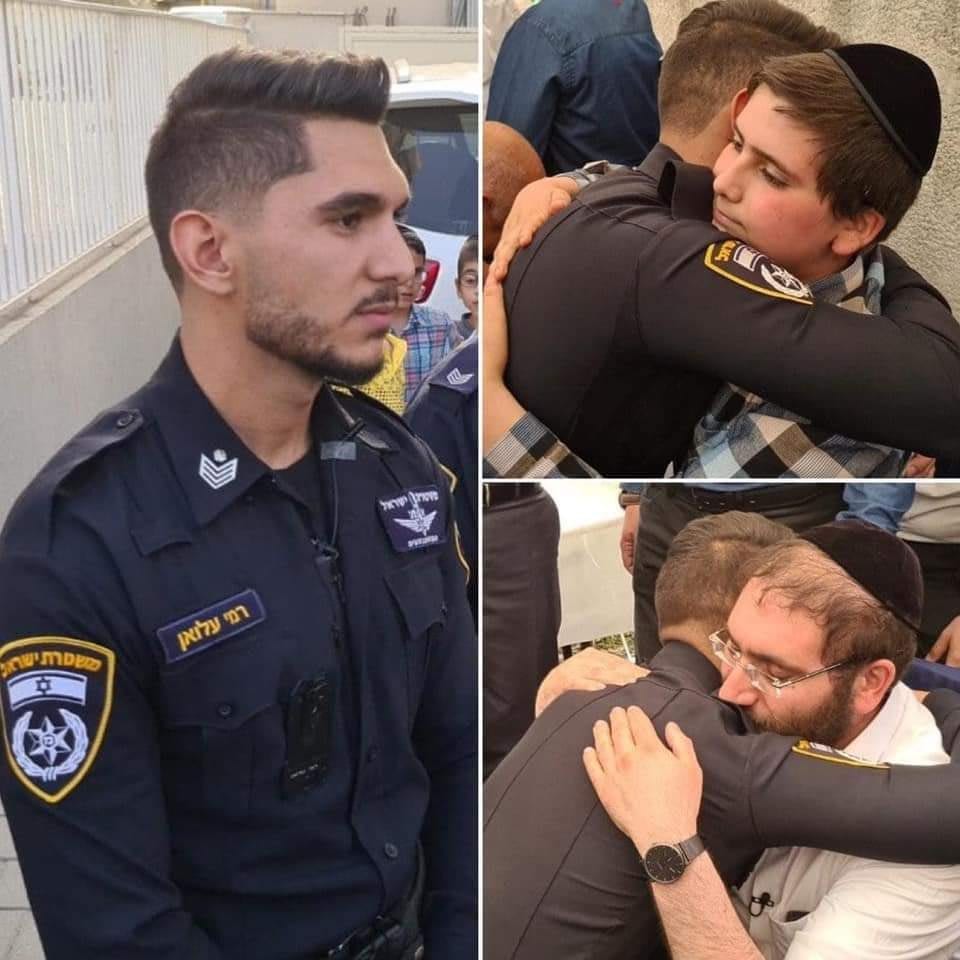 Rabbi Avigdor Hayut was at the Lag Ba’Omer gathering on Mount Meron last Thursday with his sons Shmuel and Yedidia, 13, and his son’s friend Moshe Levy, 14 when he was caught in the stampede that killed 45.

“We were dragged into the crowd,” Rabbi Hayut said to Kan News. “I saw that it was extremely crowded and things were getting out of control, so I made the decision to leave with the kids.”

Hayut said he and the three children were quickly “sucked into the crowd.

“When we got to the ramp leading down the passageway, a human landslide started and my older son and his friend were separated from us,” said Rabbi Hayut. “I found myself on my back on the floor with my younger son, with more and more people falling on top of us. I heard my son calling out ‘Abba I am dead,’ and screaming ‘Shema Yisroel.’”

“That was when we lost Yedidia and Moshe. Everybody who was behind us fell one after the other. I couldn’t breathe. I heard my son screaming, ‘Dad, I’m going to die.’ I was trying to encourage him, even when I felt like the end was near, and I was losing feeling in my body.”

The desperate father called Shmuel’s name and poured water on him, but at that point, the boy had stopped moving. At that moment, Rami Alwan, a Druze who serves in the Israeli police, appeared, risking his life, pushing into the crowd in an attempt to save lives.

“It’s hard to explain in words what happened there. Amid all the cries I approached Avigdor and he told me, ‘Save my child,’” Alwan said. “I tried to pull them both out and then another officer arrived. We pulled them out together and we managed to save them. It was all shouting and chaos.”

“As a police officer, I have been through a lot but this was the most difficult thing I have ever experienced,” said Alwan. “Above all, we are people and I was raised on values and the value of human life is the highest of all.”

Tragically, Yedidia and Moshe were killed in the mass tragedy. But Alwan’s brave efforts saved the father and others.

“Rami did not ask me what party I belong to, what stream [of Judaism] I belong to, or if I am a Bedouin or an Arab. Rami saved us,” said Hayut. He was taken to the hospital where he desperately searched for the boys.

“It wasn’t until Friday afternoon when my brother identified his body at the Abu Kabir Forensic Institute, that we knew what had happened,” he said. The two young friends were buried on Sunday. Hayut tried to comfort his friend who, like him, had lost a son.

“We lost two sons. I did what I could,” Hayut sobbed to Levy. “We held hands the entire time, until we fell and were thrown to the floor,” Hayut told the other grieving father. “Moshe and Yedidia were separated from us. I lost them. He was like my son.”

There are about 150,000 Druze living in Israel, 100,000 of whom live in the Galilee and Carmel, with the rest in the Golan Heights. They have a strong tradition that they are the descendants of Jethro, Moses’ father-in-law, and therefore have a Biblical inheritance in the land of Israel. They serve with distinction in the IDF and many go on to serve in the police. In 2017, two Druze policemen were killed by Arab terrorists on the Temple Mount. In the 2014 terrorist attack in Har Nof, Jerusalem, a Druze police officer, Master Sergeant Zidan Saif, was the first on the scene. Rather than wait for back-up, Saif bravely entered the building and was killed by the Arab terrorists. Five Jewish men were murdered in the attack.