Thus said Hashem, the God of Yisrael: Write down in a scroll all the words that I have spoken to you. 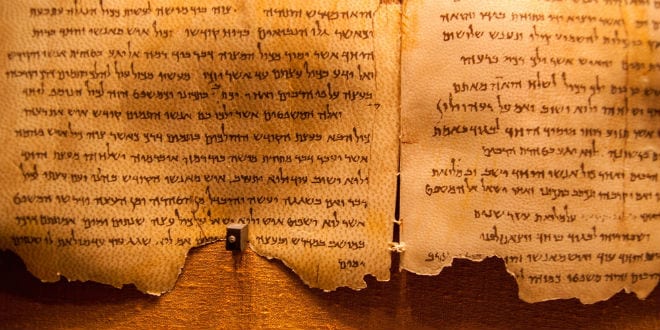 A new study into the Dead Sea Scrolls gave deep insights into the scribes whose hands inscribed the parchments over 2,000 years ago.

A new study that used Carbon-14 dating on fragments of about 30 Dead Sea Scrolls, the oldest manuscripts of the Hebrew Bible, was presented at the University of Groningen in the Netherlands. Carbon-14, or radiocarbon dating, is a method of age determination that measures the decay of the nitrogen of radiocarbon. It has been several decades since such tests have been carried out. The Israel Antiquities Authority is normally reluctant to facilitate these tests as the technique is destructive, albeit on a very small scale.

The study was intended to settle the academic conflict over the precise dating of the scrolls, which most scholars believe were written between the third century BCE and the first century CE.

“When it comes to dating the manuscripts, there is the problem that for most of the period, we have no internally dated manuscripts, and the few that we have dated from the outer ends of the timescale,” Prof. Mladen Popović, the head of Groningen’s Qumran Institute and the leader of the project, said at the conference.

The study revealed that some of the scrolls were more ancient than previously thought. The results of the radiocarbon tests on 25 of the scrolls helped calibrate an algorithm for digital analysis of paleography (the science of handwriting).

“With regard to dating the manuscripts, the data from our model shows that there was not a nice continuous progression and development of characters, but rather that sometimes there was a lot of development and sometimes not so much,” Popović said. “The characters were not developing in a linear homogeneous manner throughout these periods.”

Paleography; the study of handwriting

“Our paleographers will say that they can date Dead Sea Scrolls with a precision of 25 to 50 years’ date range, and [the research] is yet to substantiate their model,” he said. “Pending new data in the future, we dare say that we have a model that works consistently and is able to date manuscripts with an empirically based precision that was not possible before. This is a huge advance for the field.”

The study also revealed new theories about the authors of the scrolls presented in the journal PLOS ONE two weeks ago. Popović, professor of Hebrew Bible and Ancient Judaism at the Faculty of Theology and Religious Studies at the University of Groningen and director of the university’s Qumran Institute dedicated to studying the Dead Sea Scrolls, investigated these theories in his project titled ‘The Hands that Wrote the Bible’.

One aspect investigated was biomechanical traits, like the way in which someone holds a pen or stylus. In this study,Popović collaborated with PhD candidate Maruf Dhali. They focused on the Great Isaiah Scroll (1QIsaa) from Qumran Cave 1. The writing on the scroll seems uniform, attributable to one scribe, but some believe it was written by two scribes using identical styles. Precise comparisons focusing on minute details are difficult.

“This scroll contains the letter aleph, or ‘a’, at least five thousand times,”  Lambert Schomaker, professor of Computer Science and Artificial Intelligence at the Faculty of Science and Engineering, said. “It is impossible to compare them all just by eye.”

Schomaker explained that computers are well suited to analyze large datasets, such as 5,000 handwritten a’s. “Digital imaging makes all sorts of computer calculations possible, at the microlevel of characters, such as measuring curvature (called textural), as well as whole characters (called allographic).”

He also performed studies to investigate how biomechanical traits, like the way in which someone holds a pen or stylus, would affect handwriting. The study revealed that the Great Isaiah Scroll, one of the more significant of the Dead Sea collection, was the work of two scribes with nearly identical writing styles, with the second scribe taking over in the middle.

“We also succeeded in demonstrating that the second scribe shows more variation within his writing than the first, although their writing is very similar,” Schomaker concluded.

Given the close similarity in penmanship, the researchers believe the two scribes likely received the same training or were even peers within the same scribal school.

The study also applied the algorithm to study the writing style of 51 Dead Sea manuscripts. The style, known as round semi-formal, dates back to the late 1st century BCE. The study concluded that eight of the manuscripts considered were written by one scribe, the most prolific scribe ever identified and able to work in two languages.

“One of the really exciting aspects of our findings is that these manuscripts are very diverse,” paleographer Gemma Hayes told The Jerusalem Post. “We found seven Hebrew manuscripts and one Aramaic manuscript, so-called sectarian manuscripts associated with the community in Qumran and non-sectarian manuscripts, as well as some para-biblical texts, including the one known as the testament of Naftali and some writing about Rachel and Joseph.”

The rest of the manuscripts studied are believed to have been written by different scribes save two fragments which may have been penned by the same scribe.