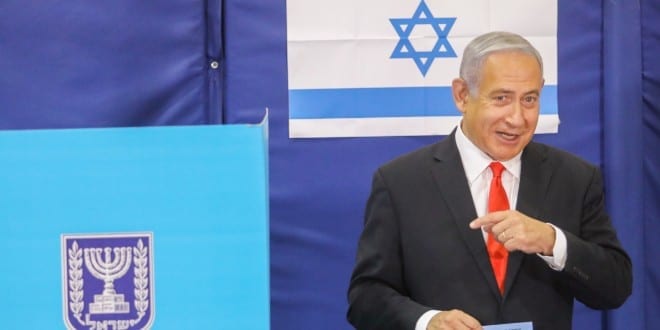 U.S. Defense Secretary Lloyd Austin’s visit to Jerusalem last week coincided with an explosion at Iran’s Natanz nuclear facility. Shortly after the attack on the uranium-enrichment site, The New York Times reported that though “Israel publicly declined to confirm or deny any responsibility” for the incident, “American and Israeli intelligence officials said there had been an Israeli role.”

Continuing to cite anonymous sources, the Times went on not only to assert that Israel was behind the sabotage, but to wonder “how much advance word—if any—the Biden administration [had] received” about it. The Paper of Record also pointed out that if those unnamed officials were correct in their claim that the blast did so much damage that it set back production at Natanz by at least nine months, “Iran’s leverage in new talks sought by the Biden administration to restore the nuclear agreement could be significantly compromised.”

As though this were a bad thing.

Meanwhile, upon emerging from a meeting with Israeli Defense Minister Benny Gantz last Sunday, Austin reiterated his government’s commitment to ensuring that Israel maintain its Qualitative Military Edge in the Middle East. He made similar comments in a joint press conference with Prime Minister Benjamin Netanyahu on Monday.

“The close and strong ties that we enjoy with Israel are central to regional stability and security in the Middle East, and we both agree that we must continue to work closely together to enhance the U.S.-Israel strategic partnership,” said Austin. “So, we discussed ways to deepen and expand our long-standing defense relationship in the face of regional threats and other security challenges.”

Netanyahu agreed with Austin that the United States and Israel are “family,” but stressed—as he has been doing for decades—that “there is no threat that is more serious, more dangerous, more pressing than that posed by the fanatical regime in Iran.”

He further stated, “My policy as prime minister of Israel is clear: I will never allow Iran to obtain the nuclear capability to carry out its genocidal goal of eliminating Israel. Israel will continue to defend itself against Iran’s aggression and terrorism.”

There is nothing new about this remark. It’s a mantra that Netanyahu has been repeating throughout his career. Suddenly, however, it is being treated by his foes as evidence that he’s been bragging about, rather than keeping the country’s traditional lid on, Israeli actions against the Islamic Republic and its regional proxies.

These include alleged air, land and sea assaults on Iranian targets, as well as the November 2020 assassination of top nuclear scientist Mohsen Fakhrizadeh, widely attributed to the Mossad. Oh, and let’s not forget the 2018 seizure of thousands of documents from a warehouse in Tehran—a trove of material that helped former President Donald Trump make his final decision to withdraw from the Joint Comprehensive Plan of Action, the nuclear deal that Iran had been violating from the get-go three years earlier.

In each of the above cases, “foreign media,” including The New York Times, have pointed the finger at Israel. Following every such incident—other than the raid of the documents that Netanyahu later purposely displayed—Israel has declined to comment.

The absence of denial, justifiably, is viewed as tacit acknowledgement. The latter serves Israel’s interests where conveying crucial messages to Iran is concerned. Indeed, letting the mullah-led regime know that the Jewish state is on the offensive is a crucial element in the low-scale shadow war aimed at impairing Tehran’s race to nuclear bombs.

The ayatollahs and their puppets always fall for the trap, promptly accusing the “Zionist entity”—and its backers in Washington—of being behind all attempts to curb their atomic and hegemonic intentions. They haven’t ever needed The New York Times’ “anonymous sources” to know a formidable foe when they see one.

In fact, it was Alireza Zakani, head of the Iranian parliament’s Research Center, who said in an interview with state-run Ofoq TV that Israel had damaged or destroyed thousands of uranium-enrichment centrifuges at Natanz. Nor was he the only Iranian official to bemoan Israel’s causing of a setback in centrifuge-spinning.

To counteract the weakness that the regime must have believed that it was portraying to the world by “crediting” Israel with prowess, Iranian state television reported on Saturday that one Reza Karimi, from the city of Kashan, was the prime suspect in the Natanz attack.

Also on Saturday, the International Atomic Energy Agency confirmed Iran’s boast that it had begun enriching uranium to a purity level of 60 percent, the closest yet to the 90 percent required to produce an atomic bomb, and well beyond the 20 percent that it was enriching up until now—in any case, a violation of the 3.67 percent level spelled out in the JCPOA.

This brings us to the latest anonymously sourced reports, according to which members of the Biden administration have been warning the Netanyahu government to stop its “dangerous, harmful and embarrassing chatter” on the Natanz attack. Never mind that the ostensible loose lips in question originated in The New York Times, whose story was picked up by media outlets everywhere, including in Israel.

Nothing like a game of telephone to spark a major controversy, particularly one whose objective is to make Netanyahu look bad—a goal that Israel’s Channel 12, among others, takes very seriously. Ironically, this took the form last week of the Hebrew broadcaster highlighting President Joe Biden’s irritation with Israel for getting in the way of a new nuclear accord.

If any of the above is true, it warrants celebration, not mourning. In other words, it’s not Israeli operations or “chatter” that are “dangerous, harmful and embarrassing,” but rather the spectacle in Vienna, geared towards cajoling Iran into accepting a well-funded and smooth path to completing its nuclear-weapons program.