Therefore prophesy, O mortal, and say to Gog: Thus said Hashem: Surely, on that day, when My people Yisrael are living secure, you will take note, and you will come from your home in the farthest north, you and many peoples with you—all of them mounted on horses, a vast horde, a mighty army. 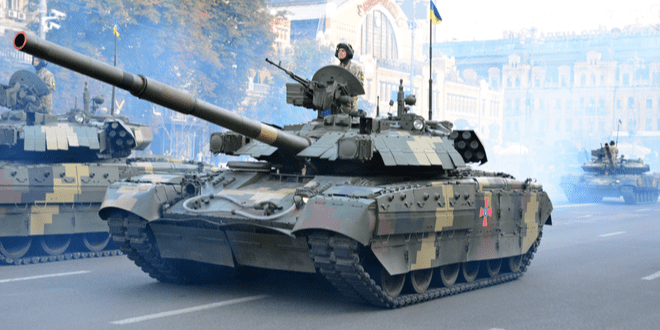 Escalating tensions between Ukraine and Russia are dragging other countries into the mix, threatening to explode into a multi-national shooting war. The situation closely matches a 400-year-old prophecy about the conditions before Messiah and one rabbi explains why current events are particularly ripe for Gog and Magog.

Russia and Ukraine Heating Up

Unbeknownst to most people in the west, Ukrainian President Volodymyr Zelensky signed Decree No. 117/2021 on March 24, essentially declaring war with Russia. The new Ukrainian decree calls for the “de-occupation and reintegration of the temporarily occupied territory of the Autonomous Republic of Crimea and the city of Sevastopol.”

This escalation has expanded to increase the western nations on the side of Ukraine with  Kiev officially opening its airspace for NATO surveillance planes and other activities hostile to the Russian Federation. Last Monday, NATO fighter jets scrambled 10 times on to shadow Russian bombers and fighters during an unusual peak of flights over the North Atlantic, North Sea, Black Sea, and Baltic Sea. In all, NATO aircraft intercepted six different groups of Russian military aircraft near Alliance airspace in less than six hours.

NATO voiced concern last week over what it said was a large Russian military build-up near eastern Ukraine. President Biden made his first phone call to the Ukrainian president last week and pledged to stand by Ukraine in the event of any Russian “aggression” while the US European Command raised its alert status to the highest level.

Russia responded by warning NATO against deploying troops to Ukraine, saying such a move would escalate tensions nears its borders. Kremlin spokesman Dmitry Peskov said that Russia would be forced to respond if NATO troops were deployed to Ukraine.

The Pentagon said earlier this week that US forces in Europe had raised their alert status following the “recent escalations of Russian aggression in eastern Ukraine”.

Vilna Gaon: “When Russians Capture Crimea, Messiah On His Way”

This conflict mirrors an end of days prediction made in the 18th Century. The prophecy was originally made by Rabbi Elijah of Vilna (also known as the Vilna Gaon), a Jewish scholar from the 18th century who is well known for his contributions in understanding the Messianic process. The prophecy was handed down from father to son and was revealed just a few years ago by  Rabbi Shturnbuch, the great-grandson of the Vilna Gaon.

The announcement of the Messianic revelation, originally publicized by Rabbi Lazer Brody, stated, “When you hear that the Russians have captured the city of Crimea, you should know that the times of the Messiah have started, that his steps are being heard. And when you hear that the Russians have reached the city of Constantinople [today’s Istanbul], you should put on your Shabbat clothes and don’t take them off, because it means that the Messiah is about to come any minute.”

Rabbi Pinchas Winston, a prolific end of days author, noted that conditions are indeed ripe for the pre-Messiah War of Gog and Magog.

“It is known that the Gog and Magog will come from the north,” Rabbi Winston said. “The Hebrew word for ‘north’ (צפון:tsafon) also implies ‘hidden’.”

Therefore prophesy, O mortal, and say to Gog: Thus said Hashem: Surely, on that day, when My people Yisrael are living secure, you will take note, and you will come from your home in the farthest north, you and many peoples with you—all of them mounted on horses, a vast horde, a mighty army. Ezekiel 38: 14-15

Rabbi Winston noted that a war between Turkey and Russia was predicted to be the precursor to the pre-Messiah War of Gog and Magog.

For those who don’t know, this isn’t the brigade you want to see on the move.

The 56th Guards Air Assault Brigade is an airborne brigade of the Russian Airborne Troops. The brigade was first formed in 1979 and fought in the Soviet–Afghan War, the 1st & 2nd Chechen War. https://t.co/lAthOpiIvw

“The two nations have faced off before,” Rabbi Winston explained. “Each time is like the building of a tower of explosives. It may seem like small events set off major conflicts but in every case, the conditions were all in place, waiting for a spark to set them off.”

Rabbi Winston noted that one pre-condition seemed to be especially incendiary.

“Major multinational wars, like both World Wars, tend to come directly after a period of excessive liberalism,” Rabbi Winston said. He made the disclaimer that “a little liberalism is a good, even necessary thing.”

“The world can only run properly when people, especially leaders, acknowledge that God runs the world,” Rabbi Winston said. “People and governments need to take responsibility for their own actions in a global framework. When people become socially irresponsible, as liberalism has certainly become, a conflict becomes unavoidable.”

“Eve was the first liberal,” Rabbi Winston said. “She threw off the yoke of heaven. She did what she thought was best for herself, opening the door to the snake. The snake is like the Putins and Hitlers of the world who think only of themselves and how they can benefit at the expense of others.”