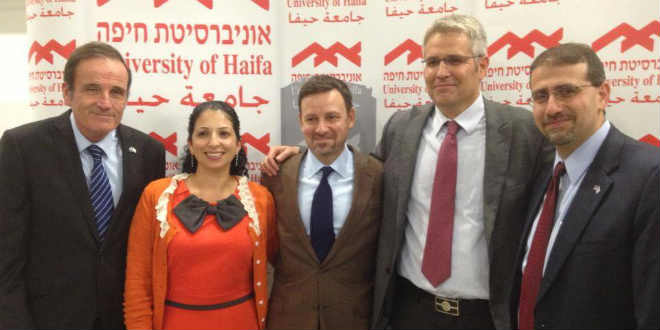 It may not be news anymore when a Jewish professor bashes Israel. But there should still be outrage when a respected U.S. Jewish academic journal publishes a virulent attack on Israel disguised as scholarship.

The journal in question, American Jewish History, is published by the American Jewish Historical Society, a distinguished scholarly organization. Its latest issue features heavily footnoted essays on topics like health-care workers on the Lower East Side in the early 1900s and the debate among Orthodox Jews over family planning in the 1950s.

And then, sticking out like a sore thumb is Michael Fischbach’s tirade against Israel, presented as a normal, scholarly book review.

Fischbach is a professor of history at Virginia’s Randolph-Macon College. According to his curriculum vitae, he has a history of working with extremists, such as the pro-PLO Institute for Palestine Studies, and writing articles for the Journal of Palestine Studies, a viscously anti-Israel propaganda publication.

But it’s not Fischbach’s track record that is the problem here. It’s what he writes in his book review, where he unleashes attack after attack aimed at the State of Israel.

He writes that the “settler movement creating a Jewish state out of 77 percent of Palestine/Israel” caused “the permanent exile of 80 percent of those who had lived there.”

For a historian, Fischbach sure doesn’t know basic Middle East history. The Arabs were given 78 percent of the area—the eastern two-thirds of the country—in 1922. The fact that they chose to call it “Transjordan,” and then “Jordan,” doesn’t change the fact that at the time everyone, including the League of Nations, saw it as one, physical territorial entity. In 1948, Israel was established in just a portion of the remaining 22 percent, not the whole 22 percent.

His accusation that Israel “permanently exiled 80 percent of the Palestinian Arabs” is nonsense. Just read Benny Morris’s book, The Birth of the Palestinian Refugee Problem. Even Morris, who was a partisan of the far-left when he wrote it, acknowledged that the vast majority of the Arabs left the country voluntarily to get away from the battlefields. Those battlefields existed because the Palestinian Arabs, aided by five Arab armies, launched a war of aggression against the Jews. And most of the Arabs who left the country went just a few miles to the east or to Gaza (which is how they ended up under Israeli rule in 1967). It’s not like they were “exiled” to Timbuktu.

Fischbach presents Israel’s very creation as an act of terrible injustice. He charges that the Jews who built modern-day Israel were “replacing the vast majority of the locals in the process”; in other words, the Zionist pioneers were thieving foreigners and the Arabs were the “locals.” In reality, a large portion of the Arabs in western Palestine were recent illegal immigrants from Syria, Egypt and Transjordan.

Continuing, the scholar declares that it’s unfair “to berate Palestinians for their ‘irredentism’ and ‘radical nostalgia of return’, absent tangible diplomatic steps to address their grievances. … Palestinians seek a modicum of justice, and until then will continue to demand both their right to return and their right to mourn.”

The “modicum of justice” that the Palestinian Arabs seek is the elimination of the Jewish state—a goal proclaimed loudly, every day, in the Palestinian news media, on their official maps and in the school textbooks they use to teach their children. What they “mourn” is Israel’s very existence. The “justice” they seek is its destruction.

Fischbach, in effect, justifies the Palestinians’ demand for a “right to return.” That would mean swamping Israel with millions of Arab “refugees,” thereby doing away with Israel as a Jewish state.

In one final ugly rhetorical flourish, Fischbach practices historical inversion, writing: “If Jews did not get over Jerusalem after 2,000 years of exile (‘next year in Jerusalem’), then might not Palestinians be forgiven for pining for Jerusalem after just 72 years?”

“Pining” for Jerusalem? No Arab or Muslim country in history selected Jerusalem as a capital. “Pining”? When the Arabs occupied the Old City—the heart of Jerusalem—from 1949 to 1967, they used the Western Wall as a garbage dump and stole hundreds of gravestones from the Mount of Olives to build latrines for Jordanian army barracks. (Including the gravestone of American Jewish legend and Hadassah founder Henrietta Szold. A collection of Szold’s letters can be found in the archives of the American Jewish Historical Society.)

Does it matter what’s published in a single academic piece in American Jewish History, which has a circulation of just a few thousand?

Yes, it does, because those few thousand readers are the professors who are teaching our college-age children. The publication also helps set the standard for what is acceptable in the field of American Jewish studies and thus what will be transmitted to the next generation. And now, it has published a vicious screed that challenges the very legitimacy of Israel’s existence and justifies the anti-Israel “right of return.”

American Jewish History has three co-editors: Professor Kirsten Fermaglich of Michigan State University, Professor Adam Mendelsohn of the University of Cape Town and Professor Daniel Soyer of Fordham University, as well as a book-review editor, Professor Melissa Klapper of Rowan University. They owe the American Jewish community—and the journal’s board of directors—an apology for violating their own scholarly standards—not to mention the rules of boundaries of good taste—by publishing Michael Fischbach’s vile attack on Israel.