The scepter shall not depart from Yehuda, Nor the ruler’s staff from between his feet; So that tribute shall come to him And the homage of peoples be his. 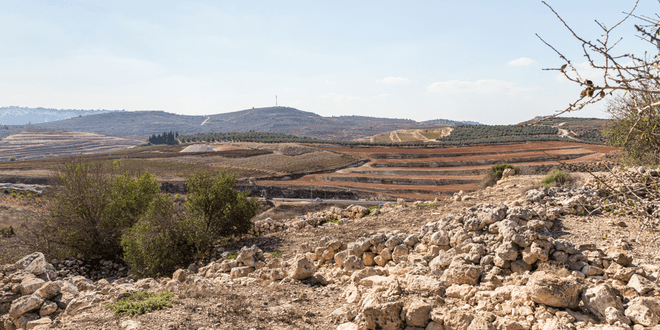 A Likud MK went to visit the ancient site of Shiloh where the Tabernacle stood for almost 400 years. In his political speech, the MK’s praise of the future of the site seemed to be a direct reference to the prophetic blessings of Jacob that revealed secrets of the final redemption.

Amir Ohana in Shiloh: The Past and the Future

Amir Ohana, the Minister of Public Security (Likud) made a morning tour of Shiloh in the Shomron on Sunday. The minister, who is in charge of all police activities, visited the archaeological site of Shiloh.

“Modern Israel learned to build skyscrapers, to empower its technological abilities and to transform itself into the startup nation, to establish strong advanced defense bodies in order to protect its citizens and to become the only nation in the world to allow all of its citizens to be vaccinated against the cursed pandemic.”

“But without roots, without honoring the basis upon which we are established now, without the past, we will not grow to our future. In recent years, Jewish settlements have grown and blossomed in Judea and Samaria. We are approaching the record of half a million residents.

“There is also room for improvement in the aspects of the security, and therefore a follow-up meeting will be held soon with the aim of establishing a police station in ancient Samaria as a sign of governance, law, and order. Commitment to our past is a guarantee for our future.”

The speech would have been a collection of pretty words and political platitudes were it not for the setting; the precise place where the Tabernacle stood for 369 years. Shiloh is first mentioned in Genesis when Jacob is blessing his sons:

The scepter shall not depart from Yehuda, Nor the ruler’s staff from between his feet; So that tribute shall come to him And the homage of peoples be his. Genesis 49:10

In this verse, the Hebrew word translated as ‘tribute’ is שילה (Shiloh). In this verse, as in other parts of these blessings, Jacob is hinting at a Messianic prophecy. The connection between Shiloh and redemption is explained by Rabbi Shlomo Yitzchaki, the medieval French Biblical commentator known by the acronym Rashi. Citing Genesis Rabbah, a collection of homiletic teachings collected around 300 CE, Rashi states that in this vers, Shiloh is referring to the Messiah. He explains that Shiloh is composed of the two words שי לו (shai lo) which means “a present/tribute to him.” This is a reference to a verse in Psalms.

Make vows and pay them to Hashem your God; all who are around Him shall bring tribute to the Awesome One. Psalms 76:12

Yochai Greenglick, a Torah educator and resident of Shilo, feels that Israeli politicians today have much to learn from Shiloh, from its Biblical past as well as its Messianic future.

“During the period of the Judges, Shiloh was on the way to Jerusalem,” Greenglick told Israel365 News. “It was the precursor to Jerusalem as the site of Solomon’s Temple. During the period of Samuel the Prophet, the events in Shiloh underscored the division in Israel that was preventing the Shechina from being fully present in Israel. There was the civil war against the tribe of Benjamin.”

“The period in which Shiloh was the focal point of Israel accented how much unity is required in order to go up in holiness in the service of God. Unity may seem like a political message and it certainly has political repercussions and manifestations, but it is precisely this unity that was the focus of ancient Shiloh and which will bring the future Shiloh in the times of Messiah.”

“Samuel, who became a prophet in Shiloh, brought this unity by anointing David. In the future, that will also be the key to the unity that brings the Messiah. This unity is precisely what we lack today is the unity that will take Israel and the world towards Geulah (redemption).”

A Bit of Background

Ohana is not personally religious in his personal life and is, in fact, the first openly homosexual right-wing member of the Knesset. He is, nonetheless, very vocal about his support of the connection between the Jewish people and the holy sites in Israel. After Prime Minister Netanyahu lifted a three-year ban that prohibited MKs from visiting the Temple Mount, Ohana ascended to Judaism’s holiest site, accompanied by then-MK Rabbi Yehudah Glick. Ohana has also expressed an equal devotion to the holy city of Hebron where the patriarchs are buried.

The tour of Shiloh was arranged by MK Amit HaLevi who, as a member of the tribe of Levi, has a personal interest in the future of the Temple service.