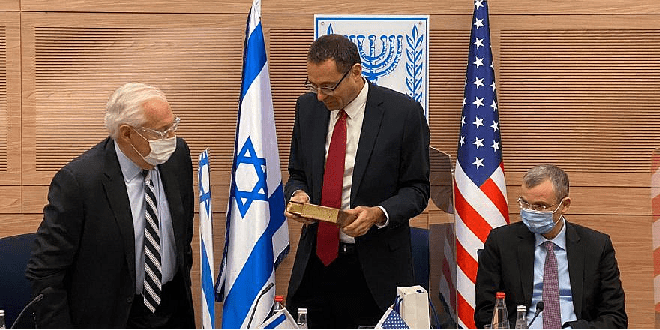 U.S. Ambassador to Israel David Friedman came to his position as an attorney without a background in politics or diplomacy. Not being allegiant to a particular point of view, he said, “gave us an open field to chart our own course which we are very proud of.”

Friedman served for four years under the Trump administration, which delivered a number of remarkable achievements for Israel, including recognizing Jerusalem as the capital of Israel; moving the U.S. embassy to Jerusalem; recognizing Israeli sovereignty on the Golan Heights; and launching an ambitious and game-changing peace plan known as the Abraham Accords.

The “us”—meaning Friedman and his team, including Jared Kushner, Jason Greenblatt and Avi Berkowitz among others—thought the way that the United States and the rest of the world were looking at the Palestinians was that “they were giving them a pass on egregious human-rights violations, a pass on the inability of Hamas and P.A. [Palestinian Authority] to ever coalesce on anything, a pass on terrorism, a pass on pay-for-slay, a pass on not creating any of the institutions necessary for an economy … and yet people were talking about a Palestinian state.”

“This was putting the cart before the horse,” he said.

Sitting down in conversation with Martin Kramer, founding president of Jerusalem’s Shalem College, as part of this week’s Tikvah Fund’s Jewish Leadership Conference, Friedman said that when he came to office, “the Middle East was due for some unconventional thinking.”

The primary advantage of coming in without a diplomatic background, he said, was “not being wed to the past” and harnessing “problem-solving skills taken from past experience”as part of his career in the legal field.

Asked which conventional wisdom needed deflation, Friedman said “the most wrong was the indulgence of the Palestinian cause to the point where it negated the notion of accountability.”

“There would be this equivalence between building settlements and acts of terrorism. You can be pro or against settlements, but you cannot possibly equate the two,” he added.

“We were triangulating towards an outcome, either one of which would have been acceptable. Polls showed there was no huge interest among the Israeli public in sovereignty; the view was if we could suspend it for a while, not cancel it, but give peace a chance and move forward, that was good with me.”

Friedman explained how the accords came about.

“Most Middle East policies, whether under Democrat or Republican administrations, were driven off of conventional wisdom which was not particularly valid,” he said. This tried-and-failed approach by other administrations was “leading to creating a dysfunctional terrorist state between Israel and Jordan. That was the path we inherited and we needed to reverse it quickly.”

He said the plan “had a high level of respect from a lot of countries that generally do not side with Israel.”

After all, he continued, “there was nothing principled about the 1947 Partition Plan; it was just about real estate. The important aspects of our plan were how to protect Israel’s security and protect it from a terrorist Palestinian state. What we did … to depart from our predecessors is we created a means for Israel to protect itself under any scenario.”

“No one expected the Arab Spring or the Syrian civil war. We created a security paradigm in our plan that does expect those things. This is the plan for the security establishment for the State of Israel. No one ever did that before. Our predecessors came up with all sorts of gimmicks and gadgets and sensors along the Jordan River and things that were supposed to make Israel feel comfortable—and they didn’t. So that’s the most important thing.”

‘We were triangulating towards an outcome’

During negotiations between Israel, the United States and the Gulf states last spring, the idea of Israeli sovereignty over certain parts of Judea and Samaria was introduced.

The premise was that America would recognize Israeli sovereignty in those areas of Judea and Samaria that will categorically go to Israel in any future peace agreement on condition that no Israeli construction would take place in other parts of “Area C” designated for a possible Palestinian state.

Israeli Prime Minister Benjamin Netanyahu guaranteed that he would begin taking steps toward sovereignty by July 1, but that date came and went.

Then, on Aug. 13, the United States, Israel and the United Arab Emirates agreed to the full normalization of relations with part of the agreement outlining that Israel will suspend declaring sovereignty.

Asked whether the sovereignty issue was taken off the table for the normalization agreements or whether the plan was conceived in the first place “as a throwaway,” Friedman replied that “the day we announced our plan, you had a detailed response from Saudi Arabia and Morocco. At the ceremony, the ambassadors from Bahrain, the Emirates and Oman all stood up and they got a rousing standing ovation. Anybody who was paying attention knew this was more than a series of bilateral discussions between us and Israel. We also knew it was going to be incredibly controversial. This piqued the interest of the Arab world.”

Friedman said there were two possible outcomes of the sovereignty issue.

The first could have been a “historic recognition by the U.S. of Israeli sovereignty over some parts of Judea and Samaria, which would begin to move the plan down the playing field,” he said.

“The other possibility could have been that because of the controversy it was creating, it might smoke out the best possible offers from those who saw suspending [sovereignty provided] the cover they needed to normalize with Israel.”

“We were triangulating towards an outcome, either one of which would have been acceptable,” he said. “Polls showed there was no huge interest among the Israeli public in sovereignty; the view was if we could suspend it for a while, not cancel it, but give peace a chance and move forward, that was good with me.”

“For the president, for the interest of the United States, to be able to make a once-in-a-generation peace deal with an Arab nation, notwithstanding that the Palestinian issue had not been resolved, I thought that would be a massive game-changer,” he said. “I think it was a consensus, and it was a no-brainer. This is what we ought to be doing.”

‘It’s all about strength in the Middle East’

Friedman also noted that in the Middle East, “signals are important.”

“This is an important signal from Israel to Hamas and Hezbollah,” he said. “Israel is not going away. Get on board. There will be huge opportunities. Don’t take these ancient grievances and die by them. Take the future and live with it.”

Friedman said the one word he views as being critical in the Middle East is “strength.”

“The weak find themselves at great peril,” he noted. “Our policy for four years was to project American strength within the region and support the exercise of strength by our allies.”

He said there was relative quiet in the Middle East during the Trump administration’s term because the message was clear that if Israel is attacked by its enemies there would be “no restrictions whatsoever” on Israel to defend itself.

“We’re not going to impose any hypothetical notions of proportionate force,” he recalled. “That message is what kept a significant level of peace in the region for those four years.”

“The weak find themselves at great peril. Our policy for four years was to project American strength within the region and support the exercise of strength by our allies.”

Friedman has questioned the soundness of U.S. President Joe Biden’s approach to confronting Iran, even though it’s less than two months since Biden took office.

On Feb. 25, the U.S. military carried out airstrikes in eastern Syria that targeted Iran-backed Shia militias. The retaliatory strike came after a rocket attack by Iran on Feb. 15 near Iraq’s Erbil Airport that killed a U.S. military contractor and injured several others. The administration said that this was a measured and “proportional” response to avoid escalation.

“Here’s how I interpret that and how most people in the Middle East interpret that,” said Friedman. “When it comes to Iran, the U.S, with its $750 billion military budget, is going to shrink its budget to the size of the Iranian budget, moving it to the side and making it inapplicable to the fight against Iran? What a terrible message that is. The Iranians just laugh at that.”

“In this part of the world, we need to be far more strategic, far more active and much stronger. It’s all about strength. Strength keeps people safe and [keeps] the peace here,” he said.

“That’s my concern about a Biden administration,” he said. “They are smart enough to know that there was great risk created in the Obama administration that hopefully, we’ve mitigated. What they will do, I don’t know. I wish them success, but I’m nervous.”