You will listen to the entreaty of the lowly, Hashem, You will make their hearts firm; You will incline Your ear to Champion the orphan and the downtrodden, that men who are of the earth tyrannize no more. 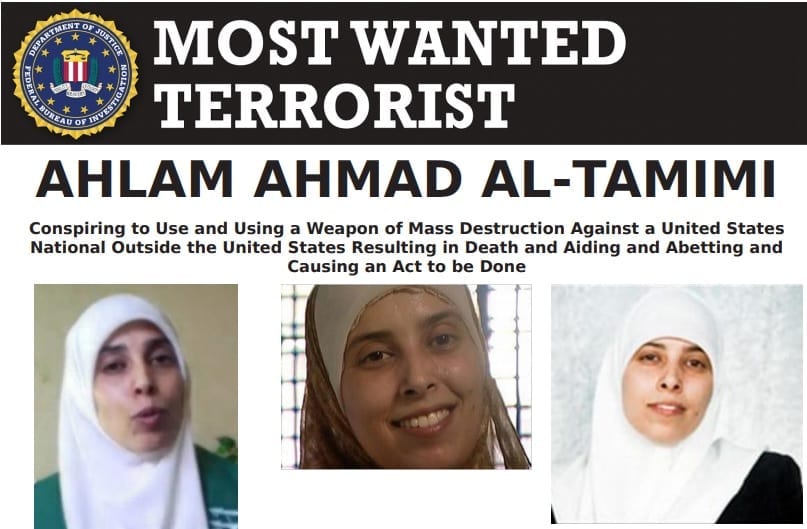 Frimet and Arnold Roth, whose 15-year-old daughter Malki, a U.S. national, was murdered in August 2001 in the Sbarro pizzeria bombing in Jerusalem, published a new video this week calling on the Biden administration to pressure the Kingdom of Jordan to extradite Ahlam Ahmad Tamimi—the Hamas terrorist who orchestrated the bombing—so that she can stand trial in a U.S. federal court.

The release of the video came out four years to the date since the United States announced terrorism charges against Tamimi for carrying out the attack through the use of a “weapon of mass destruction” against an American citizen outside U.S. soil resulting in death. Another American murdered in the attack, was Shoshana Yehudit Greenbaum, 31, an American tourist from New Jersey, who was five months pregnant at the time.

A total of 14 other people, including six children besides Malki Roth, lost their lives in the bombing attack, while more than 120 were wounded.

Tamimi was arrested a few weeks after the massacre and sentenced to 16 terms of life imprisonment in an Israeli court. She was later freed to Jordan as part of a 2011 prisoner exchange by Israel in an agreement with Hamas that led to the release of Israel Defense Forces Sgt. Gilad Shalit.

Tamimi is currently on the FBI’s “Most Wanted Terrorist List,” making her the second female fugitive to ever earn that status. In addition, the State Department’s Rewards for Justice Program announced a $5 million reward for “information leading to Tamimi’s arrest of conviction for her role in the attack.”

However, Arnold Roth told JNS that despite a 1995 extradition treaty between the United States and Jordan, “Jordan is refusing to hand over this woman.”

In fact, he said, “she is a celebrity there,” living freely and in broad daylight while broadcasting a television program in Arabic around the world via the Hamas global satellite network “praising Palestinian prisoners [terrorists] as heroes.”

Roth said that until 2016, Tamimi was, in fact, “participating in speaking tours at universities and at other venues internationally.” However, her travels stopped, when INTERPOL, the FBI-backed inter-governmental organization comprised of multi-national police and civilians, added Tamimi to its “Red Notice Mechanism,” an alert system that requests law enforcement in its member states to locate and arrest a person pending extradition.

The Roths were beside themselves when INTERPOL abruptly removed Tamimi from their list in March 2020.

“What brought INTERPOL to take her off, I don’t know,” said Roth. “It might have been from pressure from Tamimi’s family, but none of that changes the fact that she is on the FBI’s ‘Most Wanted Terrorist’ list, and there is an order for her arrest and extradition.”

Another issue in the case is the fact that in 2017, several days after the U.S. announcement on Tamimi, Jordan’s highest court ruled that the 1995 extradition treaty was null and void, based on a technicality.

On this topic, attorney Ziporah Reich, director of litigation for the Lawfare Project, which is providing legal assistance to the Roths and working to secure the extradition of Tamimi, told JNS that “despite the fact that Jordan previously extradited a number of terrorists to the U.S., it refuses to extradite Tamimi and disingenuously claims that the treaty is invalid.”

Reich added that “while it should come as no surprise that Jordan would refuse to extradite a terrorist responsible for the death of Jewish people, it should shock the conscience of every American that our government is allowing Jordan to escape retribution for its actions.”

“Not only does the U.S. remain silent while Jordan makes a mockery of its legal obligations to our country, but it rewards Jordan by continuing to support it as the third-largest recipient of U.S. foreign aid,” she said.

Roth believes that “there is a genuine desire in the U.S. Justice Department to see her in custody, but no one has addressed the issue of why the United States is not pressing the Jordanians.”

And that is why the text that accompanies the new video calls on U.S. President Joe Biden and his administration “to make clear to Jordan’s King Abdullah II that the kingdom must comply with its legal, diplomatic, and moral obligations, to extradite the bomber so she can stand trial in a U.S. federal court.”

Malcolm Hoenlein, executive vice chair of the Conference of Presidents of Major American Jewish Organizations, told JNS that “justice is being denied, and as long as it is denied, we cannot rest. We need to send a message to the terrorists that they can’t get away with these attacks. We know where this person [Tamimi] is; it’s not an unknown target. I hope the U.S. will be responsive. We have tried for many years to achieve justice for the families.”

Reich concluded by saying that “the U.S. government has tools at its disposal to pressure Jordan to abide by its treaties. However, it has yet to utter a single word or take any action to exert such pressure on Jordan. If the current administration wants to live up to its claim that it will be guided by morals and values, it must take immediate action to seek justice for the murder of its citizens.”