Has Israel Turned Into A ‘Medical Dictatorship’? This New Political Party Says So

“Ha! Those who write out evil writs And compose iniquitous documents,”

Home » Has Israel Turned Into A ‘Medical Dictatorship’? This New Political Party Says So 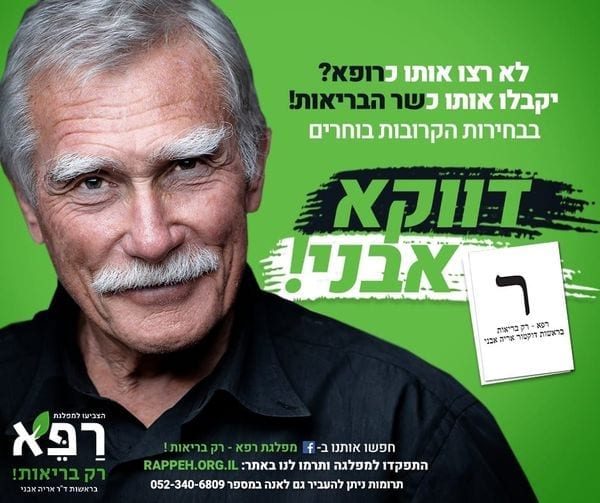 Israel’s Green Passport system, where Israeli citizens must show that they have received two doses of the Pfizer vaccine or that they have recovered from COVID-19 in order to gain admission to restaurants, gyms, pools, hotels, synagogues and other public buildings, is creating a system of “medical apartheid.”

That’s the claim of Ilana Rachel Daniel, an English-speaking candidate for Rappeh, the new human rights political party in Israel. Daniel, who is an Israel-based health advisor, researcher, activist and writer shared strong words of warning in an interview earlier this week on The Alex Jones Show.

The two discussed Israel’s growing reputation for medical tyranny. Jones asserted that “Israel is the most draconian (other than some areas of Australia) in the world. The stuff we see coming out of Israel is like a science fiction, dystopic movie.”

Daniel represents Rappeh, the new Israeli political party that is fighting against government policies, such as the Green Passport, that compromise the rights of Israeli citizens. She elaborated on the background, stating that Prime Minister Netanyahu announced that he intends to vaccinate the entire Israeli population by the end of this month.

“More than five million of our only nine million citizens have already been injected with at least the first shot of this Pfizer vaccine,” she said.

“There was a contract signed between our government and Pfizer and we were not privy to any of it. There was no democratic due process. It’s been an extremely forceful, without informed consent, rollout of this program.

“The Israeli people have sat in a cumulative five months of lockdown. And you’re talking a tiny country and very tiny little apartments. We’ve really been terrorized by our government. We’ve manufactured, overnight, a police state. It’s turned police against law-abiding, healthy citizens. There’s an atmosphere of fear and distrust between our government and ourselves, which has been very painful.

“They have changed from morning to night, from day to day, from week to week, the regulations and the policies.” Daniel refers to the government policies as, “behavior modification.”

She elaborated on the danger the government’s seemingly capricious decisions have on democracy. “[T]here is a 30-year confidentiality act that prevents the Israeli citizens from knowing anything that happens in the [government’s] Corona Committee and why they implement these extraordinary policies. It’s completely opaque. We have no idea what they’re deciding on, which is pretty extraordinary.

“We have already implemented the Green Pass, Green Passport. The name changes as well. What’s real is that there are restaurants that I have sat in and I am not allowed into unless I show a pass that says either I received this experimental gene treatment or I can show that I’ve had this coronavirus and I’m better.

“You even have teachers in the Tel Aviv municipality who are being told they cannot come and teach their classes unless they’ve taken this. It’s unprecedented.

“It becomes more extraordinary. We’ve heard Bibi (Prime Minister Netanyahu) talking about how he wants [everyone to take] four shots a year. This Green Pass, you have to renew it every six months and they even want to bring children into it.”

She called the Green Passport program, “The rot from within that would destroy our society – making a Class A and a Class B citizenry,” and predicted that, “Israel is going to see a lot of embarrassment in the international world.”

Comparisons to the Holocaust

“To me as a Jew living in Israel, to use analogies of the Holocaust is something that was very sacred. It’s not something I ever did in my lifetime. And now, the truth of the matter is, the way all of these implimentations are being rolled out, I don’t see how you can’t make the comparison [to the Holocaust].

“It’s extraordinary that it’s happening here in the land of our refuge. If you had written a movie script, people would say it’s too unbelievable,” she shared.


Medical Tyranny Not Limited To Israel


Jones and Daniel spoke about how what’s happening in Israel is just the beginning of a worldwide process. Jones called Israel, “the testing ground for the rest of the world.”

Daniel responded, “We’re all watching our world collapse. It becomes very clear that if we don’t take action, the action won’t be taken. [Rappeh] was a human rights movement that we took to the political arena.That is the uniqueness of it. We are saying what no one else is saying. We are coming from a place of integrity and saying, ‘What is happening is unacceptable – that you cannot lock law-abiding citizens into their house in house arrest, you cannot implement this extraordinary medical apartheid of the Green Passport.

“We know that we are the model country. What happens here is intended… for the rest of the world. There’s an extraordinary opportunity for us to come together in a way that we never have before.”

Daniel emphasized that, “The government can only implement these things if we obey. This warning is for the rest of the world. This is coming for you. Help us stop it here. Know that this is coming. This is an agenda for everyone.”

She concluded the interview with two thoughts. First, she clarified that, “The wickedness of our leadership here does not reflect on this people and this land, which has a remarkable uniqueness and depth.”

She also asked listeners to understand that, “This [fight against compromising civil rights under the guide of a medical emergency] is going to be a global effort. This is a beginning. This isn’t going to end in the elections that we have next week and it’s not going to end in a few months’ time. This is a long battle,” she concluded.

Daniel created the Healthy Israel Facebook group for those who wish to follow and support the efforts of the Rappeh party in English. Daniel also just created a Twitter profile @IlanaRachel1.