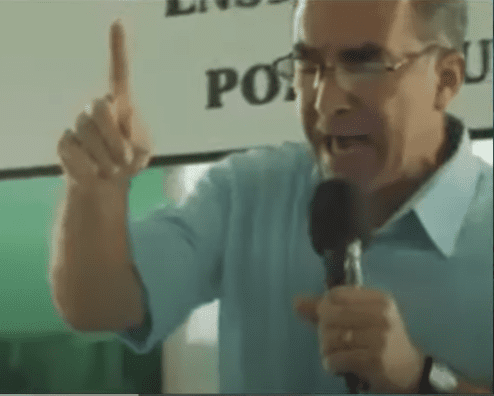 This is evidenced by a recent event on Friday whereby the Brazilian Federal police raided the church of a pastor who prayed with his congregants for another Holocaust reports Bom Dia RJ.

Last year, footage showed da Hora Lores praying and preaching with his congregants, reciting: “Massacre the Jews, God, hit them with your sword, for they have abandoned God, they have left the nations.” His congregants could be heard repeating after him passionately.

“They contrived, went with prostitutes, and when they were told to repent they said they’d do it but they lied,” the pastor stated, in a possible reference to the forced conversions to Christianity during the Spanish Inquisition.

“God, what you have done in World War 2, you must do again, this is what we ask for in our prayers to you: Justice, justice, justice!” da Hora Lores yelled in his church, to a small but radical evangelical congregation.

A snapshot of their services can be seen below:

Raniery Cavalcanti, an attorney for Sinagoga Sem Fronteiras, a network of Jewish communities in Brazil, filed an incitement complaint against da Hora Lores. The Jewish Federation of Rio in cooperation with the CONIB National Jewish umbrella also took punitive legal actions against the controversial pastor.

Da Hora Lores “should have been detained,” Rabbi Gilberto Ventura, founder of the Sao Paulo-based Sinagoga Sem Fronteiras, told the JTA. “But the fact police raided his church is already a big development.”