A song of ascents. Those who trust in Hashem are like Mount Tzion that cannot be moved, enduring forever. 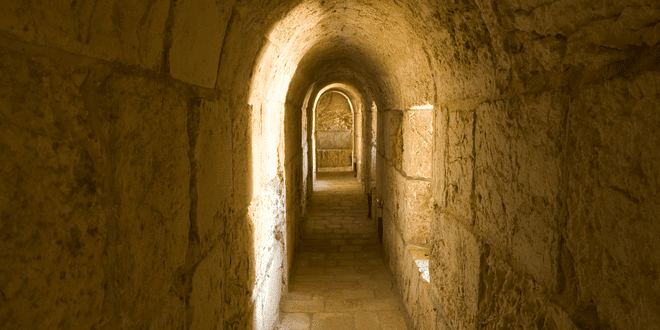 The Regavim Movement filed a petition against the Jerusalem Municipality on Tuesday, demanding law enforcement against an illegal subterranean tunnel dug by the Church of the Dormition on Mount Zion, in the heart of Jerusalem’s Old City. The area is dense with historical and archaeological artifacts which may be endangered by unsupervised digging.

One of the largest Catholic churches in Jerusalem

According to the case brought by Regavim, the Jerusalem Municipality has been concealing the existence of an underground tunnel dug by the Church of the Dormition, one of the largest and most recognizable Catholic churches in Jerusalem. It is believed the construction of the tunnel, approximately 1,970 feet long and 5 feet wide, was completed 12 years ago.  It was allegedly built by the Catholic authorities in Jerusalem as an underground passage from the main building of the Dormition Abbey to the residences of the clergy in the Beit Yosef building, a dormitory/guest house it built nearby decades ago.

But spiritual leader of the Yanar Institute in Jerusalem, Rabbi Daniel Asor isn’t buying it. According to Rabbi Asor, that tunnel is a means for the Vatican to exhume the bones of King David who they allege was buried in Mt Zion. As the church is Catholic, the rabbi asserts that they are operating under the Vatican’s instructions. Rabbi Asor adds that it’s all part of the Vatican’s plan to collect DNA from the body of King David and use his DNA to “recreate” the Messiah in an effort to fool the world into believing that the Messiah has arrived.

Adding more mystery to the affair, the Israel Antiquities Authority (IAA) which should have supervised the digging in the sensitive area has consistently denied the existence of the tunnel.

Forced to measure and document

As a result of  Regavim’s legal pressure over the past two years, the Jerusalem Municipality was forced to measure and document the tunnel, which encroaches on public property in an area dense with archaeological remains. Since the completion of the mapping project, the municipality has ignored Regavim’s continued requests for documentation of the tunnel and law enforcement at the site.

This section of Mount Zion includes the subterranean area believed to be King David’s tomb, the Hasmonean-era city walls, and the First Temple-era city wall.

A rumor shared among local residents

For years, the existence of the tunnel was nothing more than a rumor shared among local residents and Jewish institutions active on Mount Zion, until Regavim sent an official request to the  Jerusalem Municipality in 2019 for confirmation of its existence and precise details of the tunnel’s location, in order to determine the extent to which it encroaches on public land as well as the extent to which priceless antiquities may have been harmed by the unsupervised digging.

The investigation revealed that along the path of the tunnel there are underground rooms containing ancient artifacts, and the tunnel itself encroaches to a significant extent on public property. This illegal passageway was dug without a permit, violating existing planning codes and Israel’s Archeological Protection Law, without any oversight by engineers or archaeologists, as required by law, and may have damaged antiquities and other artifacts.

Despite its findings, the Municipality has not charged the Church municipal land taxes for the illegal tunnel, while all other residents of the city are expected to pay these and other taxes and tariffs or face heavy penalties.

“When the details began to come into focus, we demanded over and over that the Jerusalem Municipality publicize the documentation of its findings, as required by the Freedom of Information Law. We further demanded that oversight, inspection and law enforcement procedures be taken immediately, to restore the site to its previous condition either by sealing off or demolishing the tunnel,” said Attorneys Avi Segal and Yael Cinnamon of the Regavim Movement. “We filed this petition only when our repeated requests to the Jerusalem Municipality were not answered.”