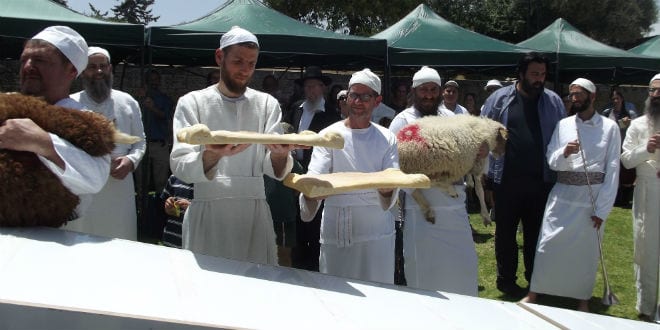 A group of prominent rabbis sent a letter to Prime Minister Netanyahu, requesting that a Passover offering be allowed on the Temple Mount.

Letter to Netanyahu: Passover is Time for Freedom

To the esteemed Mr. Benjamin Netanyahu,

We bless you that you should have great success in the upcoming elections. May it be the will of the Lord of all, whose Holy presence dwells in Zion and whose chosen city is Jerusalem, that you should continue to lead the State of Israel and the people of Israel in the coming years for good.

The harassment of you personally and the people of Israel in general by internal and external parties such as the criminal court in The Hague requires that harassment of all types be put in its place. This can be done through a statement and action that signals to all governments, friends, enemies, and all parties competing in the elections where Israel has been heading since the dawn of history.

We are going to worship God, the God of Israel, the Creator of the world in the place that God has chosen. From there comes light and instruction to the whole world.

Therefore, we ask you to allow us, as the representatives of the Jewish people, to carry out the Passover sacrifice this year and every year from now on to illustrate and observe the freedom of worship on the 14th of Nisan in the evening.

We ask that you speak out about this publicly in the coming days, stating openly that the State of Israel, the state of the Jewish people, intends to allow Jews, by virtue of their religious and national rights, to maintain a measured and modest freedom of worship on the Temple Mount. This message is especially important in the days before Passover, our time of freedom, and to give time to properly prepare one Passover sacrifice that will be for all of the nation of Yisrael while signaling to the whole world that the God of Israel has granted us the Exodus from Egypt and commanded us to perform the Torah commandments intended to bring Israel and all nations to freedom To do this, we must perform the main national mitzvah; the Passover sacrifice!

Sincerely and with great respect

The United Temple movements for the Temple and the Temple Mount, in the name of the whole house of Israel

Blame is on the Government

Rabbi Hillel Weiss, the former spokesman for the Sanhedrin, emphasized that a Temple structure is not needed in order to bring the Passover sacrifice and a temporary altar that can be assembled and disassembled in one day would suffice.

“Despite various issues of Jewish law, such as ritual impurity and lack of a high priest, Jews are still required and technically able to bring the sacrifice,” Rabbi Weiss said. “The only thing preventing the Jewish People from performing the Passover sacrifice is the Israeli government.”

Rabbi Weiss suggested the possibility that the guilt of preventing the Passover sacrifice may have led to the political troubles plaguing both Trump and Netanyahu over the last year.

The Sanhedrin performed an intense study concerning the current status of the Passover offering and concluded that at this juncture, one sacrifice made at the Temple Mount brought in the name of the entire Jewish people would suffice.

These rabbis made an identical request last year. The request was considered and denied but had it been honored, it would have marked the first time since the destruction of the Second Temple in 70 CE that a Passover sacrifice would have been performed on the Temple Mount. Israel law requires freedom of religion to be allowed at all places for all religions but security concerns based on organized Muslim violence prevent freedom of religion from being expressed on the Temple Mount.

In the letter to the Prime Minister submitted last year, the rabbis noted that the Pesach offering has special significance as there are only two mitzvot (Biblical commandments) for which non-compliance receives the most severe punishment mandated by the Torah, karet (being cut off from the community, or excommunicated): brit milah (circumcision) and the korban Pesach .

The rabbis emphasized that the korban Pesach and the Temple service were a means of stopping plagues. For this reason, the decision to begin the Temple service would benefit the entire world in this time of a pandemic. King David purchased the Temple Mount, built and altar, and offered a sacrifice to stop a plague.