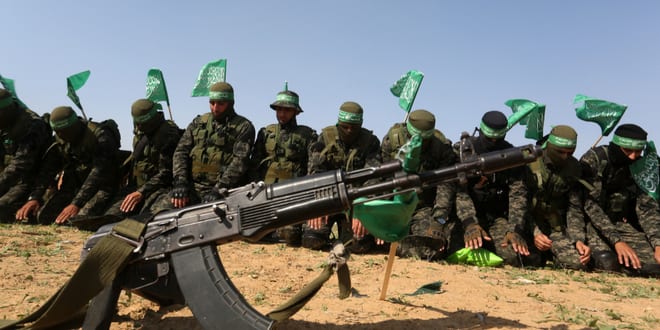 The two Palestinian rival governing movements, Fatah and Hamas, are preparing for elections in the coming months, and while it remains unclear whether they will really go ahead, Hamas is awaiting possible chaos in the West Bank, which it could exploit to boost its presence.

Hamas won a majority of seats in the Palestinian Legislative Council in 2006, the last time elections were held. A year later, the terror organization staged a violent coup in the Gaza Strip, overthrowing the Fatah movement and ejecting the Fatah-ruled Palestinian Authority. Since then, Hamas turned Gaza into a dense rocket base, pointing and firing thousands of projectiles at Israeli cities. It has prioritized building a terror army that routinely threatens the security of Israelis, and is now attempting to avert an economic collapse through Qatari financial assistance to Gaza.

But Hamas has never given up on its ambition to consolidate its rule in the West Bank, where Fatah governs, and where Israel and the Palestinian Authority share a common security interest of repressing Hamas’s armed networks.

Palestinian Authority President Mahmoud Abbas is keenly aware that dangerous “surprises” can occur if the scheduled elections go ahead, according to Col. (res.) Moshe Elad, one of the founders of the security coordination between the Israel Defense Forces and the Palestinian Authority.

Abbas is going through the motions of preparing for elections in order to market himself as a bona fide democratic ruler to the new Biden administration, Elad, a lecturer at the Western Galilee College in northern Israel, told the Investigative Project on Terrorism.

On the other hand, “Abbas is very careful to ensure that he does not lose what he possesses, and I therefore doubt that elections will go ahead,” Elad said. “Abbas will find a last-minute reason to cancel them.” One such excuse that could facilitate their cancellation would be an Israeli refusal to allow elections that Hamas runs in to occur in east Jerusalem.

During a meeting in Cairo last month of 14 Palestinian factions to discuss elections, Hamas and Fatah representatives reached initial understandings. But statements made by Hamas officials in recent days also made it clear that it would never disarm its forces that rule Gaza, irrespective of the results of the elections.

While Fatah has claimed that it is open to forming a unity government with Hamas, or integrating Hamas as a ‘division’ within the PLO, the umbrella Palestinian organization, Hamas for its part is unwilling to compromise over its full control of Gaza. That dispute, Elad said, is a fundamental roadblock that will disrupt any real progress between the ruling Palestinian factions.

“This is their main division. Beyond that, the rest [of the Cairo agreements] were just clauses,” said Elad. Hamas’s unwillingness to disarm in Gaza or give up its Islamist regime – considered by Fatah to be a renegade and illegitimate government, and the subject of multiple economic chokeholds by the Palestinian Authority – means that the two factions are unlikely to make any real progress.

In addition, Hamas will not recognize the Palestinian Authority’s routine security coordination with Israel, he said, essentially ruling out prospects of a unity government.

“Fatah is also demanding compensation for families that were harmed during the 2007 coup in Gaza,” said Elad. “Fatah remembers this – it is a ‘story of blood’ that Fatah insists must be settled separately. There are widows and orphans of the Fateh men who were killed by Hamas.”

With each side aware that the other will not agree to fundamental conditions, the gaps at some point will abort the elections process, Elad argued.

Until then, Abbas will attempt to market himself as a transparent and democratic ruler in order to find favor with the new Democratic administration, he stated.

A Hamas coup in the West Bank is not possible, Elad said, as long as the IDF’s battalions remain active against Hamas’s activities there. Israelis’ security operations also end up “protecting the Palestinian Authority.”

On the other hand, he cautioned, Abbas, aged 85, is going to depart the scene at some point, sparking power struggles over a successor, which could lead to chaos in the Palestinian Authority which Hamas could exploit.

“Hamas is well organized in the West Bank. It could take advantage of that situation to arm itself and capture positions. They have capabilities. But they wouldn’t do that now. They could try it only if something dramatic happens in the West Bank, and if it becomes unclear who is controlling it,” he said.

Israel’s Shin Bet domestic intelligence agency announced on Feb. 26 that an Israeli-Arab citizen had been arrested after being “activated by the Hamas military wing in the Gaza Strip” – specifically to gather information about the location of Iron Dome air defense batteries in Israel.

The suspect, who had a permit to travel between Gaza and Israel due to the fact that his mother resides in the Strip, was allegedly recruited by Hamas and ordered to conduct a number of missions, including reconnaissance on air defense battery locations.

The investigation “sheds light on the technique and scope of Hamas’s military infrastructure,” the Shin Bet said in a statement. “This thwarting joins a series of thwarting operations conducted in 2020 regarding civilians from ‘split families’ [that reside in both Gaza and Israel] and who worked for the Hamas organization in the Gaza Strip.”

Hamas is working around the clock to recruit Israeli citizens for intelligence gathering that would enable it to conduct terror attacks inside Israel, the agency warned.

“This is another example of how Hamas exploits the Erez Border Crossing [which allows those with permits to cross into Gaza] to carry out activities in between the areas, as part of systematic, widespread activities that is occurring vis-à-vis Judea and Samaria [the West Bank] and which is evidence of the strategy being pursued by the Hamas leadership, designed to destabilize the region, despite and parallel to the efforts to reach a [long-term truce] arrangement,” it stated.