Kabbalist Rabbi: We are in the War of Gog and Magog Right Now

“You shall not take vengeance or bear a grudge against your countrymen. Love your fellow as yourself: I am Hashem.”

Home » Kabbalist Rabbi: We are in the War of Gog and Magog Right Now 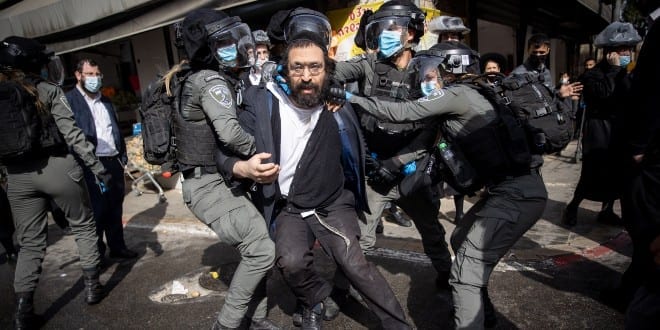 The battle between those who support the COVID-19 vaccine and those who oppose it is actually working to hold back Redemption, says Rabbi Alon Anava, popular Israeli lecturer. In a lecture delivered earlier this week, Rabbi Anava spoke about the role of the Evil Inclination in delaying the Redemption and/or making it come with more harshness.

“The whole entire world is going through some type of a big shift, which is all good by the way, because it’s all the plan of the Kadosh Baruch Hu (God),” Anava said. “The Master of the Universe is running the show. If you think there is any entity or power or human that has any power in this world to do anything, that’s already borderline heresy.

Anava asserted that at least 90% of the information being reported in the news and on social media “is never going to happen.It’s just psychological warfare to put people under pressure.”

“The war that we have now is the final war before the Redemption. By the way, it’s not your war. You have nothing to do with it. It’s The Master of the Universe’s war. Hashem (God) is going out to war against all evil. Hashem is the Master of revenge. It’s His show. It’s not our show.”

“Now we see it clearly, in a very obvious way, in [Israel] and in the world also, there’s a split between two groups – the groups that are pro the corona vaccine and the group that is against the vaccine. That’s what it boils down to around the world.”

Anava pointed out that, in the last year, there has been no news about terrorism. Every media outlet is reporting only about the vaccine. “It unbelievable actually how The Kodosh Baruch Hu brought it down that right now, the topic of the world is the vaccine. Now it’s all about corona and the mutations and the vaccine and the quarantines and the green passport…

“It’s all to make it very obvious that there are two groups, and it doesn’t matter who’s right. It’s irrelevant at this point.

Anava, who has been an outspoken opponent of the vaccine, mentioned being the target of copious numbers of hostile comments as a result of his stance. Nevertheless, he emphasized that, “I don’t go out of my way to bash you because you don’t think exactly like me. And that’s really the problem we have right now. The [Evil Inclination] tangled us around his finger.”

The Vaccine Is Not The Point

Anava makes the striking claim that, “The vaccine is nonsense. It’s what’s hidden in between, that two people hate each other with a passion because I think A and you think B, that’s the ultimate Mitzrayim (literally Egypt, meaning a place of constriction) that we are finding ourselves in. People can be neighbors, can be family! People from the same congregation, same community, same city, same family – they head butt each other in such an extreme way.”

In the midst of extreme levels of conflict and slander, Anava asked how it’s possible to move to Redemption.

“It’s irrelevant now what you believe. It’s irrelevant whether you are pro or against (the vaccine). What’s relevant is that you can’t go out of your way to completely bash a person because he doesn’t believe like you. A little bit of understanding, a little bit of leeway. Even if you see the other person as a threat to your life, why do you have to go and shame that person over the internet? Why do you have to insult that person? Why do you have to hate that person with a passion that you go and call them names? The [Evil Inclination] has brought us to a point that the Mitzrayim we are in is so deep!”

How Does This Impact Redemption?

Rabbi Anva connects the damage done by hatred and disunity to Redemption. “The danger here is the lashon hara (evil speech) and the slander and the spreading of hate and causing a disagreement is so out of control and that’s where we’re going to fail. Our success as a Nation and as human beings is when we are united.

“What’s relevant is that we’re drifting away from our chances for Redemption [that is] going to come easy. We are creating the complete opposite.

Hashem will come and redeem whoever it is that is supposed to be redeemed, but I don’t think He’s going to come in such a swift and smooth and nice way. If He decides the Redemption should not come in a smooth way, oy vavoy lanu (woe to us!). We are going to be in serious trouble.”

What Can We Do?

“I’m hoping, praying, asking, begging. Leave your hate somewhere else. The hate, and the spread of hate and the propaganda has to stop, because if not, Hashem Yerachem (God have mercy on us!) how Hashem is going to solve that.

“Hashem only cares about us being united! The [Evil Inclination] was able to trick us [to] hate each other with a passion that we’ve never seen before.

“Instead of going and typing all day long how psycho other people are, sit and learn Torah and do some good deeds. Work on yourself. I hope that Hashem can be convinced with our good actions. If we want to be redeemed with kindness and with mercy, then we have to [make] some kind of an effort.”

Anava advised that, if we fail to respect even those with whom we disagree, we will face “a hell and a half how Hashem is going to bring this Redemption.”

He concluded by urging everyone to use the approximately 30 days left until Pesach, which is an echo of the Final Redemption, “to maybe convince the Master of the Universe that we are worthy that the Redemption should come a little bit easier.”