Israel Needs America, but the Client State Era is Over

Home » Israel Needs America, but the Client State Era is Over 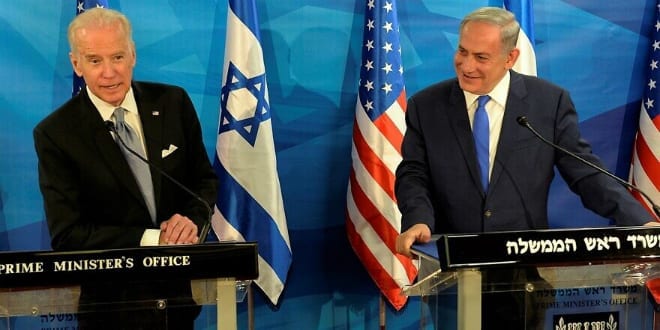 President Joe Biden may have finally called Israel last week after waiting nearly a month since he was sworn in. But the foreign-policy establishment has left its own message for Prime Minister Benjamin Netanyahu: Watch your step!

The transition from the Trump administration to that of Biden means an abrupt, and in some cases, a 180-degree policy shift. The difference between the two presidents on how to treat Israel and the Arab states aligned with it against Iran is as stark as any other being contemplated. And the prospect of Netanyahu, as well as the Gulf states and Muslim countries that have chosen peace with Israel over continuing to be held hostage to Palestinian intransigence, being demoted from America’s priority to being an afterthought is a matter of pure delight to establishment types.

But amid their celebration about this change, these inveterate purveyors of conventional wisdom about the United States needing to “save Israel from itself” by creating more daylight between the two allies need to understand that things have changed since the last time the establishment was running Washington four years ago.

With Biden’s foreign-policy team almost entirely composed of Obama administration alumni, former U.S. State Department peace processors like Aaron David Miller can barely contain their glee over Netanyahu’s demotion. In an op-ed published by Politico this week, Miller and Richard Sokolsky—another former State Department staffer and fellow senior fellow at the Carnegie Endowment for Peace—summed up the view of the so-called experts about what Biden’s policies will mean for the Middle East. Headlined “How Biden Will End the Trump Sugar High for Israel and Saudi Arabia,” the article explains that the “big egos” that lead those two American allies are in for a series of blows of which the delayed phone call is just the start.

Speaking with authority about the mindset of former colleagues of theirs, like Secretary of State Tony Blinken, the pair states in no uncertain terms that both Netanyahu and Saudi Crown Prince Mohammed bin Salman should get used to not being on anyone’s speed-dial in Washington. Both knew they could count on the support of former President Donald Trump with respect to their main concern: how to stop Iran from achieving regional hegemony, as well as from becoming a nuclear power. But Biden, beset at home by the problems of dealing with a coronavirus pandemic that didn’t magically disappear with the swearing-in of a new president and a failing economy, has other pressing concerns.

David Friedman, Trump’s ambassador to Israel, saw his job as promoting close cooperation between the two nations and fostering American support for the Jewish state. Miller and Sokolsky want a return to the pre-2017 status quo in which the American ambassador will act like an imperial Roman proconsul who is there to give orders to inferiors, not to act like a friend. That would mean the Israelis might stop behaving as if they are entitled to defend their rights in Jerusalem and the territories and to make their own decisions about issues that involve their security. The establishment thinks that Trump’s recognition of Jerusalem as Israel’s capital, as well as its sovereignty over the Golan and seeking to hold the Palestinian Authority accountable for subsidizing terrorism while getting nothing in return, was outrageous.

Biden is determined to revive Obama’s disastrous Iran nuclear deal. And despite supposedly consulting with Jerusalem about attempts to start negotiations with Tehran, the administration is determined to ignore the legitimate concerns of its closest friends and sole democracy in the region. Biden’s team is stubbornly indifferent to advice about the folly of returning to a pact that will expire by the end of the decade, leaving the Islamist regime free to resume its nuclear quest, while also doing nothing about its illegal missile program and its support for terrorism.

The authors acknowledge that the new president understands that the Palestinians have no interest in peace. That means a return to former President Barack Obama’s obsession with forcing Israel to make concessions to enable a two-state solution would be a waste of time and effort. Still, Miller and Sokolsky would prefer a “reset” of relations with Israel.

The two have an impressive list of punishments for Israel and the Saudis that would mean torpedoing the relationship with both countries, lest either nation be too obstreperous about defending their interests or seeking to obstruct a new round of American appeasement of Iran.

The Saudis are unlikely to be impressed by such treats, while Netanyahu will seek to avoid unnecessary confrontations with Biden. But what Miller and Sokolsky—and perhaps their friends in the administration—fail to realize is that there’s no going back to the old paradigm of expecting Israel to behave as a servile client state.

Small nations have always had to defer to large ones, yet the dynamic of the U.S.-Israel relationship was always predicated on the Jewish state being the beggar who had nowhere else to turn for help except for the Americans. And while there is a growing faction of the Democratic Party that is influenced by the anti-Zionism of the intersectional movement, even in the worst of times, the majority of Americans still support Israel.

Most of Trump’s Middle East moves legitimizing Israel’s stance on the legality of settlements in the territories or on the Golan can be erased with the stroke of a pen. But what can’t be so easily reversed is the new correlation of forces in the region in which Israel and the most important Arab states are aligned together in a tacit anti-Iranian alliance.

Israel still needs its sole superpower ally; however, it is no longer as isolated as it was even during the Obama years. By resisting pressure to make foolish concessions to the Palestinians, Netanyahu has already proved he could say “no” to the United States, even to the point of publicly lecturing Obama in the Oval Office, and get away with it. The same will be true with respect to the Biden administration from an Israel that has more friends among the Muslim governments of the region that have given up on the Palestinians than enemies.

By choosing to appease Iran and to back down on his 2013 “red line” threat about the use of chemical weapons in Syria, Obama effectively left Israel and the Gulf States on their own, practically pushing them into each other’s arms. Though Trump was as uninterested in further direct involvement in the region as Obama, he encouraged this relationship, and the result was the Abraham Accords, a true breakthrough for peace.

But that didn’t happen as the result of an American fiat. It is precisely because the links between Israel and the Arab world are in the best interests of both sides, rather than being part of a plan hatched in Washington, that these agreements will endure.

With a strong economy and military—and now with a growing list of friends in the Arab world—Israel can’t be as easily bullied as it was in the past. Having experienced what it meant to be treated like a true ally by Trump, rather than a favored poor friend as it was with even the most sympathetic presidents before him, there’s really no going back to the old model even if that is what Biden and his supporters want.

Trump may be gone, but his legacy of empowering Israel to stand on its own with regional friends remains. Netanyahu or any potential successor will be loath to antagonize Biden; still, the sort of deference that would involve compromising Israeli security and vital interests is now off the table.