A star rises from Yaakov, A scepter comes forth from Yisrael; It smashes the brow of Moab, The foundation of all children of Shet. 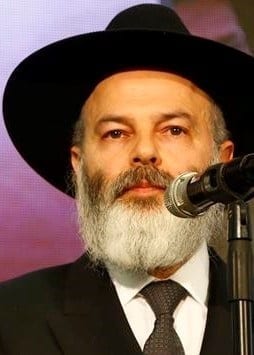 A recent video claimed that a major Hasidic leader in Jerusalem stated that the prophesied Star of Jacob, referred to in some circles as Nibiru, will begin to affect the Earth as of this week.

Rebbe of Lelov: Nibiru Will Begin in the Month of Adar

A video published on Tuesday presented a Hebrew-language audio of an anonymous man who claimed to have heard directly from Rabbi Yaakov Yitzchak Biderman, the current Grand Rabbi of the Lelov sect of Hasidic Judaism based in Jerusalem, confirming the predictions made by Yuval Ovadia, an Israeli filmmaker who has made several award-winning films on the subject of Nibiru and Planet X.

Though Ovadia has never specified a timeline for the arrival of the star, the Lelover Rebbe, as he is known to his followers, said that the star is very close to the earth.

“The rebbe said that we should start seeing the effects of the star even as early as the beginning of the Hebrew month of Adar,” the video stated.

“After Rosh Chodesh (the beginning of the new month), many things will begin to happen in the world. The arrival of the star will be only one of them.”

Ovadia: “It is All Written in Jewish Sources”

Yuval Ovadia was greatly appreciative of the rabbi’s affirmation.

“It is very reassuring to hear that a highly-respected saintly rebbe acknowledges my work,” Ovadia told Israel365 News. “Religious Jews should pay heed since, after all, I only bring Jewish sources to back-up my conclusions. Unfortunately, even people of faith will not believe sometimes don’t believe until after it happens.”

Yuval emphasized that he has never predicted a precise date for the arrival of Nibiru.

“I am not a prophet nor am I on the spiritual level of the rebbe, but there is a source that suggests a specific timeline,” Ovadia noted, citing the Zohar.

“We know that the final redemption will be patterned after the Exodus from Egypt,” Ovadia reasoned. “The Exodus took place of Pesach (the holiday of Passover) which falls on the 15th of Nisan. 40 days before that is when the pillar of fire is supposed to appear and that is approximately Rosh Chodesh Adar. It could be this year or any year after that but the sources seem to suggest these dates.”

Ovadia noted that the Bible contains a prophecy of a star signaling the arrival of the Jewish Messiah.

Rabbi Moses ben Maimon, known by the acronym Rambam, the foremost Torah authority of the 12th century whose rulings are still used as the basis for much of Jewish law, cited this verse about the Star of Jacob as proof of the Messiah, emphasizing that it will come from Jacob, i.e. the tribe of Judah and his descendants the Jews, and not Esau or Edom.

The appearance of this pre-Messianic star is predicted to be catastrophic, accompanied by extreme natural disasters. The Vilna Gaon, an 18th-century Jewish scholar, stated that the power of this star system could destroy the world. Ovadia explained that this may not be caused by the star colliding with the Earth but rather by God exerting his influence on global weather events via the star.

2,000 years ago, the Zohar, the foundational work of Jewish mysticism, predicted the appearance of a star with seven ‘stars’ orbiting it.

“Jewish sources say that this astrological phenomenon is a necessary part of the geula (redemption),” Ovadia said. He explained that if the star does not appear, then any claim that the Messiah has arrived will be rejected by Judaism.

He pointed to an example: 400 years ago, Rabbi Yaakov Sasportes used the absence of a new star as an argument against Shabbetai Tzvi, a Jew who falsely claimed to be the Messiah.

The video continued to relate the words of the Lelov Rebbe.

“The rebbe instructed people to prepare candles and other such things because there will be a great darkness,” the video continued. “There will also be earthquakes in every country except for Israel. In Israel, the damage will be much less.”

“When I asked how we should prepare, the rebbe said that there is nothing we can do,” the witness reported. “The only thing we can do is have faith in God.