“Those Representing Palestine Must Be Prepared to Sacrifice Blood” ‎ ‎– Fatah Official 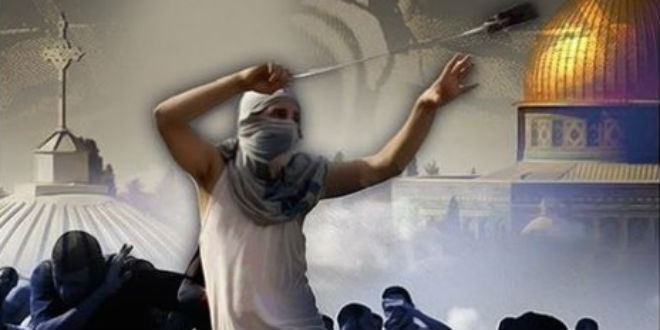 Fatah chooses the path of violence and encourages Palestinians to give their lives as “Martyrs” for ‎‎“Palestine.” That was the message given by Fatah Revolutionary Council member Raed Radwan recently when he appeared on official PA TV, emphasizing that Palestinians must be prepared “to sacrifice blood” to ensure victory against Israel.

His words, uncovered by Palestinian Media Watch, were echoed by others in the Fatah movement, including a host on Fatah’s Awdah TV, who explicitly linked Yasser Arafat and the current Palestinian Authority leader Mahmoud Abbas with arch terrorists including Abu Jihad, who was behind attacks that killed 125 Israelis.

Appearing recently on PA TV’s Palestine This Morning, Radwan told the program’s host that because Fatah “carried the rifle,” the party has a “mighty heritage of Martyrs and prisoners,” adding: “Palestine is the center of the universe ‎religiously, politically, and even geographically… Those representing it must ‎be prepared to make a sacrifice and to sacrifice blood for the sake of this ‎cause.”

Three days later, Muhammad Abu Habseh, father of terrorist Anan Abu Habseh, appeared on the same program, telling the host: “Our heads will reach the sky and our feet will ‎continue to be planted in this good and pure land. With our skulls we will pave ‎the path to victory, until the liberation of Palestine.”

Habseh’s son was 20 years old when he and a friend, 21-year-old Issa Yassin Assaf, carried out a stabbing attack at Jerusalem’s Old City, killing one Israeli and wounding another. Both terrorists were killed during the attack by Israel Police, along with another Israeli who was accidentally killed trying to stop them.

Less than a week later, Fatah’s Awdah TV ran a segment in which the female host told viewers: [Fatah] is Yasser Arafat and Mahmoud Abbas. ‎Despite the difference in tone of speech and external appearance, it is Khalil Al-‎Wazir [‘Abu Jihad’], Salah Khalaf [‘Abu Iyad’], and Dalal Mughrabi. It is Karim ‎Younes, Mahmoud Bakr Hijazi, and Fatima Barnawi. It is the Martyrs, the ‎prisoners, the wounded, the deported, and the self-sacrificing fighters.”

In doing so, she made it explicitly clear that far from being a moderate organization and partner for peace, Fatah is ideologically committed to terror as a means of promoting its political agenda.

The terrorists who Mahmoud Abbas is compared to include Abu Jihad who orchestrated attacks in which at least 125 Israelis ‎were murdered, including the Coastal Road massacre led by terrorist Dalal Mughrabi ‎who, together with others, murdered 37 Israeli civilians, among them 12 children.
Abu ‎Iyad headed the terror organization Black September and planned the attack on the ‎Israeli athletes at the Munich Olympics in 1972 during which 11 Israelis were ‎murdered.

Karim Younes murdered one Israeli; Mahmoud Bakr Hijazi tried to blow up ‎the Nehusha Water Institute in central Israel; and Fatima Barnawi placed a bomb in a ‎movie theater in Jerusalem that fortunately failed to explode.

Director of PMW, Itamar Marcus, commented: “One of the most incomprehensible deceptions of international relations is the Palestinian Authority and Fatah’s presenting themselves as moderates who have rejected terror. Here within the space of a few days Fatah and PA frameworks have again glorified past terrorists and called for more blood. The Western countries that continue to financially support terror-promoting PA/Fatah, are suffering from an acute case of willful blindness.”

For additional information on this release, or PA and Fatah policies and ideologies, contact Itamar Marcus, director of PMW: +972-50-528-4907 or email: itamar@palwatch.org

Founded in 1996, Palestinian Media Watch (PMW) is a non-profit Israeli research institute known internationally for its in-depth research of Palestinian society from a broad range of perspectives.

It is PMW’s intention that governments and key-decision makers worldwide will use PMW’s research to address the real obstacles to peace and develop effective solutions that focus on the fundamental changes the Palestinian Authority must make before there can be any chance of peace.