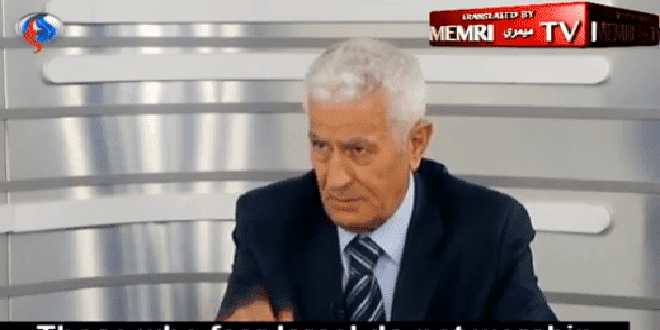 A Palestinian alleged “military expert” disseminates the lie that Israeli rabbis ‎are teaching Jewish kids to “kill everyone who is not Jewish,” as reported by ‎Palestinian Media Watch. Now Wasef Erekat has taken his libel a step ‎further, claiming that the rabbis specify that Jewish kids should “kill the ‎Palestinian children”:

Ironically – and sadly – it is the PA that teaches Palestinian children to attack ‎Israelis. ‎

Earlier this month, senior Fatah official Abbas Zaki took pride in Palestinian ‎children attacking and terrifying Jews,  demonstrating the PA’s fundamental ‎approval of Palestinian kids who seek to murder Jews. Zaki enthusiastically ‎and approvingly told a story of a Palestinian boy who was waiting with a rock ‎in his hand to “slaughter Jews”:‎

Fatah Central Committee member Abbas Zaki: “Ted Koppel (i.e., a ‎US broadcast journalist and news anchor), came in 1987 to prepare ‎daily reports from the [first] Intifada (i.e., Palestinian wave of violence ‎and terror against Israel, approximately 200 Israelis murdered, 1987-‎‎1993)… He passed by a [Palestinian] nine- or 10-year-old child ‎standing on a trash heap and holding rocks, as if he were ‎preparing. [Koppel]… asked him: ‘What are you doing here?’ [The ‎child] answered: ‘I am waiting for Jews.’ [Koppel] asked: ‘Why?’ He ‎answered: ‘Because they killed my uncle. I want to slaughter them.’ ‎‎[Koppel] told him: ‘Go home,’ … [The child] answered him: ‘Ah, so ‎you’re a Jew. You’re one of them, you’re from Israel.’ He began to ‎chase him and throw rocks at him, and he chanted: ‘Palestine is ‎our land and the Israelis are our dogs.’ He ran after him, and ‎‎[Koppel] ran… [Then the TV crew met] a [Jewish] child dressed in ‎beautiful clothes in front of a building with a tiled roof, in other words, ‎something fancy, and he also had a schoolbag… [Koppel] asked him: ‎‎‘Why are you standing here?’ He answered: ‘I am waiting for my ‎mother… so that she will take me to school.’ … [Koppel] told him: ‎‎‘Walk.’ He answered him: ‘The Arabs will kidnap me.’ … [Koppel] ‎said: … the [young] Palestinian generation is full of confidence and ‎strength while the [young] Israeli generation is in a state of emptiness, ‎fear, and panic. The Intifada must be stopped with any kind of solution ‎in order to prevent a future slaughter of the Jews of the area’ (PMW ‎was unable to find any record of Koppel making such a statement or ‎the aforementioned footage -Ed.). ‎

Look how far it went. If one of our children causes someone like ‎Ted Koppel to say such things, our situation is good. We are ‎proud that the young people are the future.”‎

PMW has reported that the PA tells youth that death for Allah and “Palestine” ‎is preferred over studies even, promotes murderers of Israelis as “heroes” to ‎children, and teaches kids they are mere “ammunition” for Islam, the weapon.‎