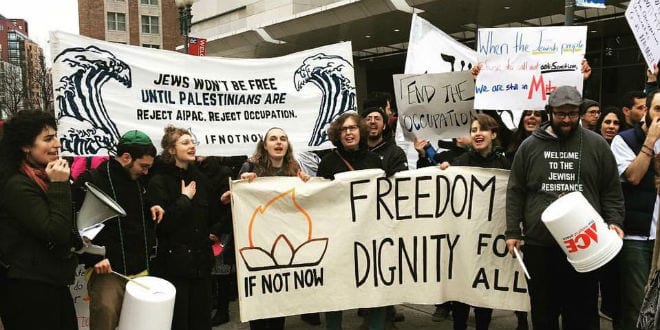 In a manner that betrayed their roots in Torah and role as God’s chosen, several left-wing anti-Israel Jewish groups celebrated the death of Sheldon Adelson, a billionaire Jewish philanthropist and an ardent lover of Zion. Putting politics before common decency, many ignored that long list of charitable acts performed by Adelson, choosing to focus on his politics.

In a tweet posted just a few hours after his death on Tuesday, IfNotNow derided Adeslon’s life work, invoking a Hebrew expression, Yemakh Shmo (may his name be erased) which is exclusively reserved for only the most evil historical figures, usually restricted to enemies of the Jewish people.

To be clear, Sheldon Adelson (worth $40 billion) paying his employees for two months is the equivalent of someone making $40k giving a $54 itunes gift card.

If Adelson cared about vulnerable people, he wouldn’t have given $450 million to the @GOP and @realdonaldtrump.

Rabbi Shmuley Boteach tweeted a harsh rebuke, calling for the organization to “do teshuva” (repent).

Easily one of the most vile tweets ever written about a fellow Jew and human being in Twitter history. We say Yimach Shemo for genocidal mass murderers. You have disgraced yourselves and should delete this disgusting act of self-abasement. Do teshuva

Rabbi David Wolpe, of the Sinai Temple in Los Angeles, tweeted, “When you celebrate the death of your ideological opponents it is worth wondering what your ideology has made of you.”

When you celebrate the death of your ideological opponents it is worth wondering what your ideology has made of you.

Sarah Tuttle Singer, a blogger at Times of Israel known for her left-wing political views, also chastised the left-wing group, responding, “A human being just died. He did things that we don’t have to like. But for the sake of his family, don’t do this.”

Can’t you wait til after the shiva? Or Gd forbid maybe focus your energies on building better partnerships and fighting for justice instead of creating more division. A human being just died. He did things that we don’t have to like. But for the sake of his family, don’t do this.

A present for my birthday https://t.co/Hqn6FQuraU

Happy Birthday! Mine is the 19th. pic.twitter.com/SZ37MbOSfw

Though he is now reviled by the left-wing, Adelson was originally an ardent Democrat, undergoing a personal political shift in the 1990s. Adelson donated more than $430 million to conservatives in the 2020 elections,  $525 million to federal political campaigns and committees since 2010, and was believed to be President Trump’s largest donor.

He was a fierce advocate for Israel, donating hundreds of millions of dollars to Israeli causes, and owned the Israel Hayom daily newspaper and Makor Rishon weekly.

IfNotNow was founded in 2014 as a “movement to end the American Jewish community’s support for the occupation and gain freedom and dignity for all Israelis and Palestinians.” The organization has been criticized for its anti-Israel activities which are documented by NGO Monitor. It is funded by the Rockefeller Brothers Fund, which funds a number of anti-Israel organizations.