A Disaster and a Tragedy for America, Jews and Decent People Everywhere

Home » A Disaster and a Tragedy for America, Jews and Decent People Everywhere 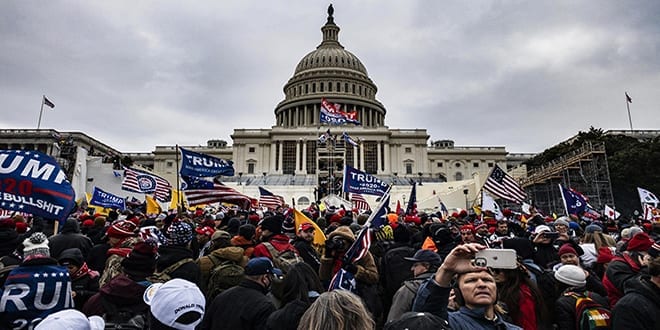 If freedom is indivisible, so are the rule of law, constitutional order and respect for the democratic process.

That’s why the appalling events that took place on Capitol Hill on Wednesday are so shattering to one group in particular.

Of course, every person who supports those orderly principles—the core of any civilized society—will have looked on aghast as a violent mob stormed the Capitol, forcing lawmakers to fling themselves to the floor in terror as the process of certifying a president was brought to a halt.

Everyone who regards America as the standard-bearer of Western values will have been appalled by the spectacle of the constitutional order being so violently breached. Whatever the provocation, however strong the belief may be that the election process was fraudulent, the only way to resolve this is through lawful and democratic means. There is no cause that can justify violence in a free society.

But the people who are perhaps the most distraught by what happened are those who feel most betrayed by the person who bears responsibility—not just for the disorder itself, but also for having now undermined the increasingly desperate defense of good against evil.

That person is President Donald Trump. And among those who are so very distressed, the people who now have most cause to fear for the future are the Jews who supported him, towards whose interests as a people he was arguably the most sympathetic president there has ever been but whose trust he has now so wantonly squandered.

Many of Trump’s Jewish supporters, like others who voted for him, disapproved of his manifest personality and temperamental flaws. Nevertheless, those who backed him understood that he was arguably the only significant bulwark against the enormous threat posed by the left to the West’s core democratic and social values.

Such people watched America being defamed in schools and universities as intrinsically racist. They watched as their history was rewritten by propaganda falsely casting their nation as springing from evil and oppression.

They watched as conservative thinkers were hounded off university platforms or out of academic posts for having views that did not conform to the left-wing consensus.

They watched as the confirmation hearing of Supreme Court Justice Brett Kavanaugh was disrupted by left-wing activists.

They watched as Trump was subjected for most of his term to an arguably illegal and certainly subversive attempt by an alliance of administration officials and Democrat politicians to lever him out of office through a campaign of baseless smears.

Yet in an Orwellian inversion of reality, the Democrats and their propaganda mouthpieces in the mainstream media accused the president himself of being a threat to the constitution and the rule of law.

Now, though, Trump has appallingly proved them right. Until this week, he had confined himself to constitutional means to press his charge that the election had been fraudulent.

On Wednesday, however, he utterly destroyed his claim to be upholding constitutional order against those who threaten it. Urging people to “take back the country,” as he did at his morning rally for thousands of already wound-up supporters, was an open call to insurrection.

His belated exhortation to obey the rule of law was risible considering he had set these unlawful events in motion. And even after he finally called on his supporters to go home, he actually justified and excused the violence.

The results of his behavior are incalculable. It has made it unlikely that any Republican will now have the stomach to subject the evidence of election fraud to proper investigation.

And with the Republicans having lost control of the Senate in this week’s Georgia runoffs—for which, absent proof of further claims of election fraud, Trump’s behavior must take the blame—an ever-more extremist Democratic Party will no longer be constrained by congressional checks and balances.

All decent people should now be alarmed. Jews have particular cause to be so. For the party that now has untrammeled power poses a threat to the security of both Israel and American Jews.

Not that most American Jews see it that way. They are, however, part of a gathering tragedy for which the Georgia run-offs provided a cameo.

One of those elected to the Senate, Rev. Raphael Warnock, has a record of supporting hateful and irrational positions on Israel. The other new senator, Jon Ossoff, belongs to the majority section of the Jewish community which supports the Democratic Party despite its increasing toleration of such positions.

It is disturbing, for example, that the Democrats ever selected Warnock as their candidate.

In 2019, he signed a letter by faith leaders which referred to “the heavy militarization of the West Bank, reminiscent of the military occupation of Namibia by apartheid South Africa.”

These are boilerplate lies on the left that incite murderous hatred of Israel and Jews around the world. Warnock subsequently doubled down on his remarks by claiming that he was “speaking to the issue of activists and human rights and the ability of people to be heard.”

Moreover, he has supported the extremist pastor Jeremiah Wright, who infamously said “God damn America,” blamed “them Jews” for not being able to be in contact with his former congregant, former President Barack Obama, and stated that “ethnic cleansing is going on in Gaza.”

Yet in 2008, Warnock said: “We celebrate Rev. Wright in the same way that we celebrate the truth-telling tradition of the black church, which when preachers tell the truth, very often it makes people uncomfortable.”

Given all this, his subsequent protestations that he loves America, supports Israel and believes in its security appeared opportunistic and disingenuous.

Tragically, though, as so often in Jewish history, there are Jews who are actively helping this onslaught against truth, justice and decency. Liberal American Jews have supported Warnock with the Jewish Democratic Council of America circulating a petition claiming that he was the victim of “baseless claims and attacks.”

Such Jews have continued to support the Democrats regardless of Obama’s hostility to Israel or his empowerment of Iran. They continue to support them regardless of their embrace of the poisonous Jew-hater, Nation of Islam head Louis Farrakhan, and “The Squad” of Democrat Congresswomen who are given to anti-Israel or anti-Jewish statements.

And now, with the Democrats unconstrained, we will all be forced to watch as the arguably criminal conspiracy to destroy a president is buried; as the anti-white, anti-West, anti-Jew Black Lives Matter movement is invited to set the social agenda; as the Palestinian Arabs are again empowered and incentivized to resume their campaign to exterminate Israel; and as America allows two of the most lethal threats to the free world—Iran and China—to walk all over it.

The moral case against the Democrats had been solid and overwhelming. But now, with Trump having betrayed the rule of law and constitutional order, those trying to defend these principles against the left have been grievously undermined.

What a disaster. What a tragedy—for America, for the West and for decent people everywhere.