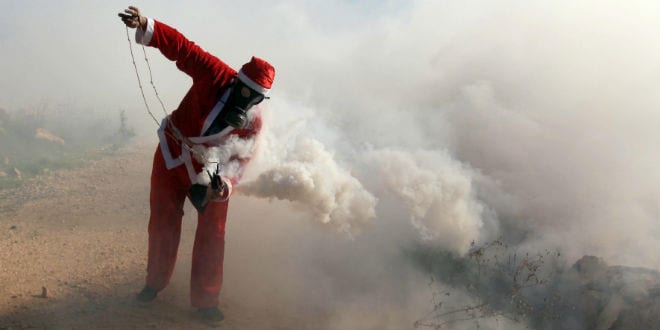 In the year of the pandemic, its no wonder that horrible things continue to come back in ways that are threatening and objectively wrong. This year, maybe because of the virus and people being stuck at home with nothing better to do, a gross lie has resurfaced as it does every year at this season, undermining truth and the foundation of Judaism and Christianity.

Each year around Christmas, efforts to propagate this malicious lie get stronger and more brazen. It’s part of a slanderous campaign of deception, whose end goal is to erase Jewish history from Israel, and Israel from the map. Denying and trying to erase the centrality of Judaism to Israel, and the State of Israel, is bad, and ridiculous, enough. But doing so also denies the origin of Christianity, and is why Jews and Christians should be alarmed and concerned.

This year, the ante was raised as the lie was spread by none other than the BBC. Yes, the British Broadcasting Corporation, a global media entity that seems to never miss a good opportunity to spread lies and malice about Israel, since the days of the good ol’ British occupation.

The BBC’s recent lie is a libel, of biblical proportions. So, what did the BBC do that was so egregious? In two different programs this month, they referred to Jesus as a “Palestinian.” It’s such a lie and distortion of reality, that they may just as well called Jesus a Palestinian unicorn. It’d have been as accurate.

The New Testament is unambiguous, and rich with accounts of Jesus being a Jew. It describes his lineage, his participating in countless Jewish rituals, debating and preaching Jewish law, participating in worship in the Temple, and the Last Supper being a Passover seder (not a Ramadan break fast). When one propagates the lie of Jesus being a “Palestinian,” it is not just historically inaccurate, but denies the
very foundation of Christianity.

That really should be enough to disprove and dispel the lie, and prevent what one would think of as rational people from spreading it. But there are no shortage of people who have no compunction about undermining Christianity, much less advocating any hateful story about the “Palestinians,” especially if its one that discredits and blames others for all their problems.

So, if the New Testament account were not good enough to dispel the lie of “Jesus the Palestinian,” historically there’s irrefutable evidence as well. The fact is that it wasn’t until a century after the crucifixion of Jesus, in the year 132, when the Jews fought Roman occupation (known as the Bar Kokhba Revolt), that the term &quot;Palestine” was applied to the Land of Israel. Only after the Romans defeated the
Jews in 135, did they rename the Land of Israel “Palestina” to punish and humiliate the Jews. The Romans hijacked the proper Jewish (and biblical) name, Judea, replacing it with the name of an ancient enemy of the Jews as if to complete the vanquishing of the Land and the People.

So, if the name “Palestine” only came into being 100 years after his crucifixion, it is not possible that Jesus was a “Palestinian.” Period. Not only that, Jesus never would have even heard that term. He’d have been just as likely to know about Martians, or Vulcans.

What made the BBC think that this was true, or maybe even knew it was a lie they could get away with? The reality is that since the birth of the PLO, marking the beginning of the Palestinian national movement 56 years ago this week, hijacking of truth (as well as used in terrorism) has become part of the “Palestinian” tradition. It’s also an appropriate tradition that this lie is peddled around Christmas
which is also the week of the PLO’s birth in 1964.

The successor of the PLO that grants “legitimacy” to their national aspiration, the Palestinian Authority, gives voice to their national aspiration, like the PLO, not by building their own society, but by undermining Israel and its legitimacy. Accordingly, there’s very little that the PA does from inciting, celebrating, and funding terrorism, to promoting the myth of Jesus as a “Palestinian” that is not meant
to undermine Israel. Over the years, Palestinian Arab leaders and the PA itself have referred to Jesus as: “the first Palestinian,” a “Palestinian messenger,” “the great-grandfather of the Palestinian people,” and perhaps most egregiously, “the first Palestinian martyr (shahid).”

By hijacking Jesus this way, they (unwittingly) ascribe to him characteristics of being a “Palestinian terrorist.” Indeed, the Arabic “shahid” is commonly used posthumously to “honor” those who have died in propagating terror or a broader Islamic jihad, or holy war. It also represents someone who sacrificed his or her life for their Islamic beliefs, and in the “Palestinian” case, for fighting Israel and murdering Israelis. While they have no qualms undermining Judaism and Christianity, they would never have the audacity to call Jesus a Moslem, because Islam didn’t come into existence until several hundred years after Jesus’ crucifixion. And while heresy against Judaism and Christianity is just fine, they’d never commit the heresy of calling Jesus the first Moslem, centuries before Mohammed was even born.

I’ve written about this before, but the BBC piling on to the “Palestinian Jesus” myth brings the lie to a new low. If Palestinian Arabs (and the PA) want to be taken seriously, and equally seriously aspire to build a culture and society of their own, they would be well advised not to base their claims on fundamental lies that only serve to take down another society, not to mention the two original, and biblically based, monotheistic faiths and their adherents.

People of faith and good conscience need to use every means and media possible to debunk the lie ofthe “Palestinian Jesus” lest those that propagate the lie also replace every biblical instance of a donkey with a unicorn, if not call Jesus a “Palestinian” unicorn himself.