Can the Bipartisan Consensus on Israel be Revived?

Home » Can the Bipartisan Consensus on Israel be Revived? 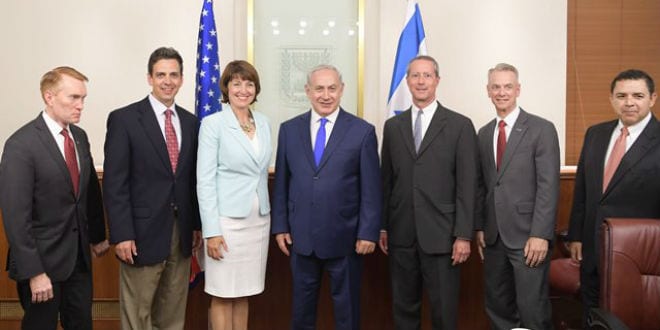 One of the standard laments of the organized American Jewish world in recent years has been the decline and fall of the bipartisan consensus on Israel. This complaint is based on the notion that the default inclination of most Americans is support for the Jewish state, and that the only reason that politics has become part of the discussion about relations between the two nations is because of the bad will of some partisans who wish to distort the debate to advance their personal agendas at the expense of the best interests of Israel and its supporters.

For the last two decades, the focus of most of these complaints has been on Republicans, who have been accused by Democrats of politicizing an issue that should be above partisan considerations. These arguments have reached a crescendo during the last four years as President Donald Trump was repeatedly accused of trying to wreck bipartisanship with respect to Israel. Now that he is on his way out and President-elect Joe Biden is on his way in, Jewish Democrats are claiming that the new administration will restore the old consensus.

The answer is that Biden is capable of restoring that consensus, but it won’t be because the change in power in Washington has undermined Republican efforts to weaken it. On the contrary, the one factor that has made it increasingly difficult for unity on Israel is not the increased support for Israel by Republicans in recent decades but the decline among Democrats. The people who broke the consensus are the Democrats and, in particular, President Barack Obama and his administration. It was Obama who sought more “daylight” between the two nations, achieving it with policies designed to damage Israel’s security as part of a vain effort to entice the Palestinians into peace negotiations and to appease Iran.

Biden, in his capacity as vice president, was as responsible for those policies as anyone else in that administration. Indeed, he allowed himself to be used as the focus of one spat Obama manufactured with Israeli Prime Minister Benjamin Netanyahu by claiming that he was insulted by the announcement of a housing project in Jerusalem during one of his visits there.

But if Biden is really determined to restore bipartisanship to the issue, then it’s easily within his power to do so. All he has to do is to act as an ally to the Jewish state, rather than attempt to bully its leaders into taking actions they believe imperil Israel’s security. Though Democrats believe that virtually everything Trump did was wrong and that the basic purpose of the Biden administration is to erase all evidence of the last four years, restoring the consensus means Biden will have to act more like Trump than Obama.

Is he willing to do that?

If he does, it will be smart politics. The overwhelming majority of Americans are pro-Israel. Indeed, sympathy for Zionism is baked deep into the political DNA of the United States and dates back to the earliest days of the republic, long before even the formation of the modern Zionist movement.

Polling shows that not only has sympathy for Israel, especially in contrast to sentiment about the Palestinians, not gone down but has actually remained steady over the years with a small increase recently. The Gallup tracking poll on the issue shows that 74 percent of all Americans have a favorable opinion of Israel. Breaking that down by party, a whopping 91 percent of Republicans liked Israel. Though Democrats are less supportive, even there a strong majority of 67 percent viewed the country favorably. But when the pollsters asked whether respondents backed Israel in its conflict with the Palestinians, a clear partisan split appeared. Republicans take Israel’s side by an 86-5 percent margin while Democrats are nearly evenly split with Israel getting 44 percent support and the Palestinians 38 percent.

That partisan divide on Israel has remained fairly stable for more than 20 years, and it has been reflected in the policies pursued by Republican and Democratic administrations. When Obama quarreled publicly with Israel—doing his best to tilt the diplomatic playing field in the Palestinians’ direction—Democrats were outraged when Republicans criticized the administration. That dispute was exacerbated by Obama’s decision to appease Iran and to conclude a weak nuclear deal with Tehran that Israel’s government (as well as much of the Arab world) considered an unconscionable retreat from the West’s commitment to regional security. When Republicans invited Israeli Prime Minister Benjamin Netanyahu to address a joint meeting of Congress to urge them to reject the president’s policy, this was interpreted by Democrats as undermining the consensus and insulting Obama.

Netanyahu’s decision to attempt to intervene in an American political dispute (albeit one with huge implications for Israel) was a tactical mistake. It helped Obama rather than hurt his cause. But there was something particularly perverse about Democrats complaining about Republicans sabotaging bipartisanship when it was their side that had blown up a previous consensus that it was America’s duty to stop the Iranian nuclear threat rather than to appease it.

Equally absurd was the claim that Trump’s tilt towards Israel somehow damaged the pro-Israel consensus. His was the most pro-Israel administration ever to serve as he fulfilled promises to move the U.S. embassy to Jerusalem, held the Palestinians accountable for their support for terrorism and then facilitated normalization agreements with Arab states despite the refusal of the Palestinians to make peace. That was something that Obama’s Secretary of State John Kerry said would never happen, in no small measure because he wasn’t interested in making it happen. The Democrats refusal to back Trump’s pro-Israel stands indicated that they prioritized partisanship over pro-Israel policies. If the consensus seemed to collapse, then the blame fell upon a Democratic Party that was increasingly under the influence of its radical intersectional activist wing that is clearly hostile to Israel.

Nevertheless, Biden won the Democratic nomination in spite of the opposition of that faction of the party, which supported Vermont Sen. Bernie Sanders, whose antagonistic attitude towards the Jewish state was favored by BDS supporters and anti-Semites like Reps. Ilhan Omar (D-Minn.) and Rashida Tlaib (D-Mich.), and political activist Linda Sarsour, a co-chair of the Women’s March until her anti-Semitism became too problematic.

Biden might have thought Trump’s pro-Israel tilt was unwise and may hold on to some magical thinking about the Palestinians being willing to accept a two-state solution. His determination to re-enter the Iran nuclear deal without preconditions is also deeply troubling. But while he needed the votes of Sanders supporters to win the presidency, they have no leverage over him now. If he wishes, Biden could avoid conflicts with Israel over peace talks with the Palestinians that have zero chance of success. He can snub the anti-Israel wing of his party and reaffirm close ties with Israel. He can also take a more cautious approach to Iran that would be as much a matter of defending American security interests as those of Israel and the Arab states.

If he does all that, the bipartisan consensus on Israel can re-emerge stronger than ever. But that’s a big “if,” and has been the case for years, it has little to do with what Republicans do and everything to do with whether Democrats are willing to buck their left-wing activists and stick with the Jewish state.