And you constructed a basin between the two walls for the water of the old pool. But you gave no thought to Him who planned it, You took no note of Him who designed it long before. 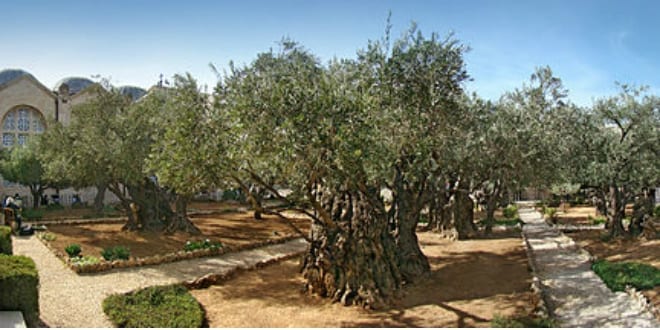 One of the first archaeological finds of its kind of Second Temple-period activity at Gethsemane, a garden at the foot of the Mount of Olives in Jerusalem, was unearthed near the modern church during archaeological excavations conducted by the Israel Antiquities Authority (IAA) in collaboration with scholars from the Studium Biblicum Franciscanum. A 2000-year-old ritual bath discovered at the site which, according to Christian belief, dates from the time of Jesus’s presence in Jerusalem. Impressive remains of a Byzantine church were also uncovered in the Kidron Valley at the foot of the church.

The exciting archaeological discoveries were presented on Monday at a press conference attended by the Custos of the Holy Land, Fr Francesco Patton, IAA archaeologists, and scholars from the Studium Biblicum Franciscanum.

Custos Fr Francesco Patton, who is Head of the Custody of the Holy Land, said “Gethsemane is one of the most important sanctuaries in the Holy Land, because in this place the tradition remembers the confident prayer of Jesus and his betrayal and because every year millions of pilgrims visit this place and pray in this place. Even the latest excavations conducted on this site have confirmed the antiquity of the Christian memory and tradition linked to the place, and this is very important for us and for the spiritual meaning connected with the archeological findings. I greet with great pleasure this fruitful cooperation between the Custody of the Holy Land, the Studium Biblicum Franciscanum and the Israel Antiquities Authority and I hope that we will be able to join our scientific competences for further future collaborations.”

In recent years, the Custody of the Holy Land has been investing in the development of tourism at the Gethsemane Church and in the Kidron Valley at its foot, for the benefit of tourists and pilgrims. The development work includes a visitors’ center and an underground tunnel that will link the church to the Kidron Valley. When the workmen encountered ancient remains, the IAA began a salvage excavation at the site, directed by Amit Re’em and David Yeger and with the assistance of the Studium Biblicum Franciscanum.

The Church of Gethsemane (also known as the Church of the Agony or Church of All Nations), located at the foot of the famous Mount of Olives, is one of Christianity’s most important churches and is visited by thousands of pilgrims every year.

The church was built in 1919–1924 on the site and it is a prominent sight from the Old City. When the building’s foundations were laid, remains of churches from the Byzantine and Crusader periods were unearthed. However, not a single archaeological trace was found from the Second Temple period.

While digging the new visitors’ tunnel, a few meters away from the modern church, workers were surprised to discover an underground cavity, which was identified as a Second Temple-period ritual bath.

“Most ritual baths from the Second Temple period have been found in private homes and public buildings, but some have been discovered near agricultural installations and tombs, in which case the ritual bath is located in the open. The find of this bath, unaccompanied by buildings, probably attests to the existence of an agricultural industry here 2000 years ago – possibly producing oil or wine. The Jewish laws of purification obliged workers involved in oil and wine production to purify themselves. The discovery of the ritual bath may therefore hint at the origin of the place’s ancient name, Gethsemane (Gat Shemanim, ‘oil press’), a place where ritually pure oil was produced near the city.”

The excavation also unearthed remains of a previously unknown church that was founded at the end of the Byzantine period (sixth century CE) and continued to be used during the Umayyad period (eighth century CE). The church was ornamented with finely carved stone elements that testify to its importance.  According to archaeologists, the church commemorates one of the many events attributed to the place in the New Testament. Greek inscriptions found incorporated in the church floor and deciphered by Dr. Leah Di Segni from the Hebrew University of Jerusalem and Dr. Rosario Pierri of the Franciscan Institute read, “for the memory and repose of the lovers of Christ (cross) God who have received the sacrifice of Abraham, accept the offering of your servants and give them remission of sins. (cross) Amen”.