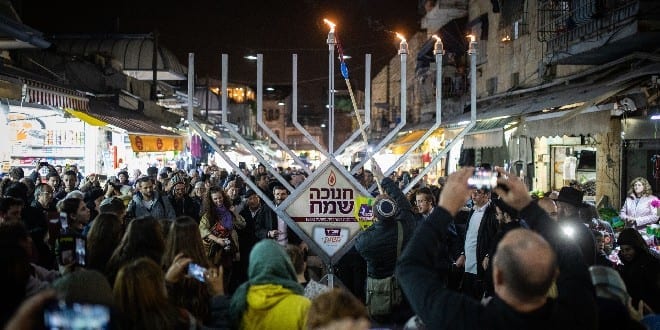 The extraordinary scenes in Dubai that included Hanukkah celebrations are part of a historic and unprecedented process of embracing tolerance, coexistence and peace by the United Arab Emirates.

It is happening simultaneously with a unique bursting forth of ties between Israel and the Emirates, and comes as flights began from Tel Aviv to Dubai, all of it years in the making.

The UAE has been embracing a unique kind of tolerance that has translated into actions – not just the kind of talk of “diversity” one gets in the US or Europe, where Jews have to go to synagogue surrounded by security and armed guards and where graveyards are frequently vandalized with swastikas.

Last year was proclaimed as a year of tolerance in the UAE. This has been a process over the last decade that has seen a national ethos emerge, which supports visible displays from numerous religions.

Visibility is important. It’s one thing to talk about diversity, but having giant Christmas trees in hotel lobbies and Santas in the mall – and Hanukkah celebrations below the massive Burj Khalifa, a new Hindu temple and modern mosque architecture – is all part of an openness to true interfaith tolerance.

This support for real, visible tolerance is unique in the Middle East. Over the last decades there has been growing sectarianism in some countries, along with massacres and terror. In Europe, there are frequently attacks on Jews and synagogues. The UAE has sought to change the narrative by speaking consistently and openly about coexistence – and including Jews in those discussions.

For instance, on November 11 the UAE embassy in the US emphasized that the country had unveiled plans last year for an Abrahamic Family House: an interfaith complex for inclusion. This went along with tweets by officials about how much pride the Emirates takes in efforts toward tolerance as a national policy.

With imagery and descriptions of the new Abrahamic House – and noting that the country has 200 nationalities and many faiths – the videos put out by the government show messages to people around the region about how Jews, Muslims, Christians and people of other faiths are coming together.

My experience in the UAE last week and in 2015, when I attended the Emirates Literature Festival, shows how much the country has moved forward on these plans, putting them into action.

The Hanukkah celebrations last week that began on Thursday were just one part of this. Israel’s displays at the GITEX tech confab were part of it, as was the virtual tour of the Crossroads of Civilizations Museum with Israel’s culture minister on December 2 and the event there with Ahmed Obaid Al Mansoori on December 6.

The first weeks of December are a historic turning point on a path that was launched with the year of tolerance in 2019 along with the moves the UAE has made over the last few years on peace and coexistence.

In this region messages are important. Showing government support for different religions and having Hanukkah celebrated in a central space, as it was last week, shows the 200 nationalities in the UAE that Jews are embraced.

Jews have visited and resided in the UAE in the past, but obtaining kosher food was difficult. Now there are kosher caterers, and hotels will have kosher food. In May, reports about Elli’s Kosher Kitchen made huge headlines. Now there are new stories every day about initiatives for coexistence that include Jews, as well as a push to include more information about Jews and Judaism in everyday activities.

In discussions with numerous people involving these symbols and statements, videos showing rabbis with Jews at prayer with tefillin have been mentioned as examples of rapid change over the past year.

People say that although the changes seem fast, their overall foundation is the year of tolerance and the last decade of conscious national decisions to embark on this path.

It is a path that is being gingerly embraced by other countries. Whether it is renovations of synagogues in Lebanon or Egypt, or more interest in Jewish history in Iraq and even Sudan, the discussion is happening.

But in many countries it is happening more quietly. The new peace deals with Morocco and Bahrain provide wind in the sails for this coexistence. For instance, the “happy Hanukkah” greetings that are flowing from the Gulf, such as from organizations like the King Hamad Global Centre for Peaceful Coexistence in Bahrain, all anchor this new support for including Jews in national discussions.

On the one hand this should be normal: Jews should be embraced. But on the other hand, decades of toxic rhetoric in the region and the way Iran and its extremists made hatred a normal aspect of daily life – as well as the way groups linked to the Muslim Brotherhood push anti-Jewish views openly, including constant conspiracies – poisoned the minds of generations.

It will take decades to change that. What has begun in the UAE over the last week is part of the process – and it has burst forth with intense energy.