The death of His faithful ones is grievous in Hashem‘s sight. 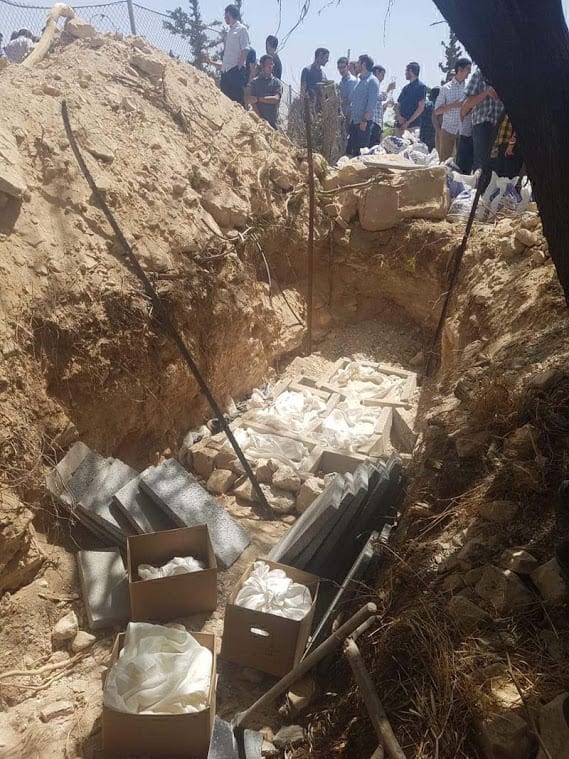 About a year ago, a shocking case of archeological damage happened at the site of the Hasmonean Palaces near Jericho. “Palestinians” (Ii.e. Arabs living in Judea and Samaria) stole some of the artifacts and even desecrated the bones of the Jews of Jericho buried at the site in the Second Temple era.

The ancient burial caves on the outskirts of Jericho date back to the Second Temple period and are apparently part of the extensive burial grounds of the Hasmonean palace uncovered at the site. The cave was exposed in the course of landscaping work carried out by local Arab farmers, who rolled tractors over the site to prepare the ground for agricultural work.

Professor Rachel Hachlili of Haifa University’s Zinman Institute of Archaeology, who studied this region, identified these caves as the largest Second Temple-era burial ground in Israel.

Hikers who visited the site were appalled by what they found: Human remains were strewn everywhere on the freshly tilled ground, the catacombs were thoroughly ransacked and looted, and the sarcophagi (burial caskets) that had been resting in the caves for more than 2,500 years had disappeared.

Antiquities theft and destruction of archaeological treasures is rampant; in fact, it has become nearly commonplace throughout Judea and Samaria. In this case, ancient catacombs were wiped out by illegal quarrying despite the constant stream of alerts, warnings and documentation sent to the Regional Commander for Antiquities in the Civil Administration, the body responsible for law enforcement in the area.

In the attached video filmed one year ago, you can see Regavim’s joint efforts with Preserving The Eternal, the Binyamin Regional Council, and other activists from Binyamin, to properly rebury the bones in the Kfar Adumim cemetery.

Last Monday, on the 5th night of Chanukah, a stone-setting ceremony took place at the cemetery. The organizers emphasized that Hanukkah was an auspicious time to commemorate and honor the Jews of Jericho from the days of the Hasmoneans. Many tried, and still try, to break the People of Israel’s resolve and spirit.

Burying bones comes from a powerful Torah imperative that transcends simply honoring the dead. In Jewish law, this is referred to as meit miztvah, a Torah commandment so important that it supersedes most other commandments. Concerning meit mitzvah, the bones should be buried where they are found however in some cases, this is impossible. In many such cases, this mitzvah causes conflict between archaeology and the commandment to honor the dead. Intervention, sometimes criminal, by the Arabs can further complicate matters.

“To those who seek our destruction, and to those who seek to weaken the Jewish people’s special connection to the Land of Israel, we say: you shall not succeed!” Regavim said in a statement. “We are here to stay. We shall continue to stand up for Jewish individual and national rights. We shall battle to preserve and protect our wonderful land for the sake of all its residents.”